Can The Prodigals really be 25 years old? TAYSHT podcaster Mike Farragher catches up with the Irish American band who have just released their new album "Belturbet Town." 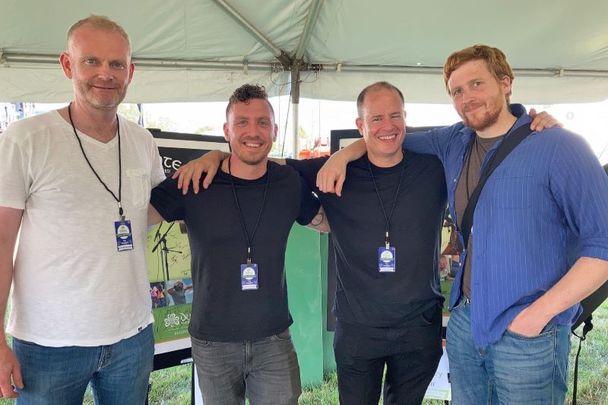 One of the positive yet unexpected side effects of engaging in this TAYSHT blog and podcast endeavor with IrishCentral is that you’re confronted by the passage of time and the deep friendships you’ve amassed over the years.

There is also a bit of denial that seeps in as well: can The Prodigals really be 25 years old? Wasn’t that you running to Paddy Reilly’s to see your new pal Greg Grene and The Prodigals in an attempt to run away from the early signs of “adulting” that came with diapers and bills you left back home? You’d linger with Greg and the lads after the gig without a care in the world.

Almost a  quarter of a century has passed since you were blasting the devil-may-care “Happy Man” and “The Morning After” from "Dreaming In Hell’s Kitchen" as the soundtrack of your life, and the release of The Prodigals' excellent new "Belturbet Town" now arrives as an old friend that has grown up with you.

In his room in the Bronx when the family has gone

he listens for echoes, lingering on

it’s a long road he’s come, and the path lies ahead

in the lull of the living, the dance of the dead.

These words are from the title track of the album, and The Prodigals fan finds Grene grappling with both natural and unimaginable losses; of his mother’s recent peaceful passing and the unfathomable death of his twin brother Andrew in a Haitian earthquake back in 2010.

That’s not to say that "Belturbet Town," the birthplace of Andrew and Greg Grene (the album cover is centered around a childhood photo of the twins), is maudlin. Greg Grene, ever the optimist, peppers the album with sweet melodic trad tunes like “Carolina’s Concerto/Arthur Darley” and revisiting an old friend with a measured read through “Black Velvet Band” to provide the balance of life’s natural ups and downs.

It was a joy to discuss the new music that drives Grene, a self-confessed foodie, to soldier on at Paddy Reilly’s in NYC on any given weekend with The Prodigals (Colin Forhan, strings, and Eamon Elams, drums). Our conversation celebrating a quarter-century of music and friendship is now on Spotify.

Check out the latest TAYSHT podcast, featuring The Prodigals, here and over on Spotify: