IrishCentral’s Book of the Month: “The President’s Letters” from Flor MacCarthy

Join the IrishCentral Book Club this July as we read “The Presidents' Letters: An Unexpected History of Ireland” from Irish journalist Flor MacCarthy. 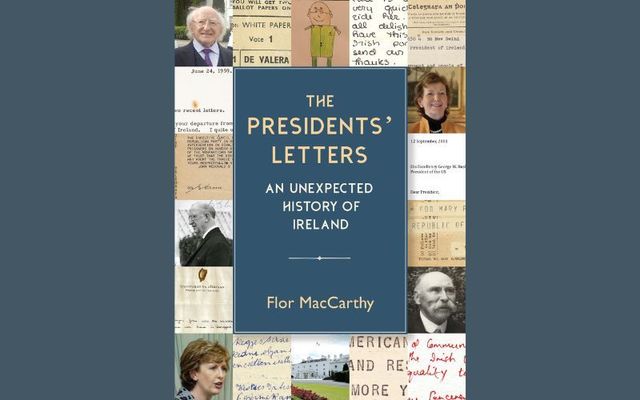 “The Presidents' Letters: An Unexpected History of Ireland” by Flor MacCarthy was launched in the US this month. New Island Books

“The Presidents' Letters: An Unexpected History of Ireland” by Flor MacCarthy is the July 2022 selection for the IrishCentral Book Club.

Throughout July, we’ll be reading “The Presidents' Letters: An Unexpected History of Ireland” from Irish journalist Flor MacCarthy, which was published by New Island Books in October 2021 and was shortlisted for the An Post Irish Book Awards Irish-Published Book of the Year.

The Presidents' Letters is officially here and we are really looking forward to launching it in style at @dlrLexIcon tomorrow eve.🥂

About “The Presidents' Letters: An Unexpected History of Ireland” from Flor MacCarthy

With over 400 letters, memos, cards, telegrams, drawings, notes, and photographs, "The Presidents’ Letters" reveals a personal and unexpected story of Ireland since the inauguration of Ireland's first president, Douglas Hyde.

Most of these have never been published before and a handful have never been seen by the public. They are letters of congratulations, of resignation, of sympathy. A handwritten note from a president to a queen, a message sent to the moon, a fond farewell from a poet. There are letters of joy and loss, begging letters and threatening ones, sent from palaces, parliaments and prisons, from war zones, refugee camps, and homeless shelters.

Meticulously researched and handpicked for this unique book, these correspondences bring to life Ireland's presidents, Áras an Uachtaráin [the official residence of the President of Ireland] and all those who have passed through its doors.

"The Presidents’ Letters" explores how each of Ireland's presidents defined their eras and how they strengthened the relationship between Ireland and all who identify as Irish.

The book is divided into thematic sections, rather than separate chapters on the individual presidencies and features contributions in the form of one-page chapter introductions to contextualise the correspondence.

US launch of “The Presidents' Letters: An Unexpected History of Ireland”

MacCarthy was in New York City this week for the US launch of her book, which provides a tantalizing peek behind the curtain of the Irish presidency.

Prior to arriving in New York City, MacCarthy spoke with IrishCentral about her process of digging through a century's worth of correspondence, which she says was enthusiastically welcomed and facilitated by Irish archivists and historians.

"My criteria for letters going into the book was, they had to make me say, 'Wow, I never knew that!'" she told IrishCentral. The letters that made the cut are a multifaceted mix of everything from official correspondence to personal missives.

But the book isn't just an encyclopedia of letters. Instead, the correspondences are contextualized by several contributors, including Cork woman Samantha Barry, who is now based in New York City as the editor-in-chief of Glamour magazine.

Barry and MacCarthy discussed the book at an event hosted by the Irish Consulate in New York City on June 27, a fitting locale for a book that, in part, looks at the unique relationship between Ireland and the US.

At the special event, Irish actress Marie Mullen was on hand to read aloud a letter written by Jackie Kennedy to President Eamon de Valera in the wake of President John F. Kennedy's assassination. IrishCentral is delighted to announce it will be publishing this letter in the coming days.

Flor MacCarthy is an Irish journalist and broadcaster who hosts political debates on Oireachtas TV (Irish parliamentary TV), interviewing politicians and academics in Ireland and at the European Parliament. A former news reporter and newscaster with RTÉ, she also presented a variety of cultural programmes on radio and television and has acted as a consultant for several international human rights organisations. Freelancing these days, and with a passion for history and the arts, she has contributed to numerous events in Ireland’s Decade of Centenaries. Flor is from West Cork and lives in Dun Laoghaire with her family. "The Presidents’ Letters" is her first book. You can follow her on Twitter at @florNEWS.