Orla Godley, from Illinois, has the distinction of being the only American woman to win first place at this year's CLRG World Irish Dancing Championships. 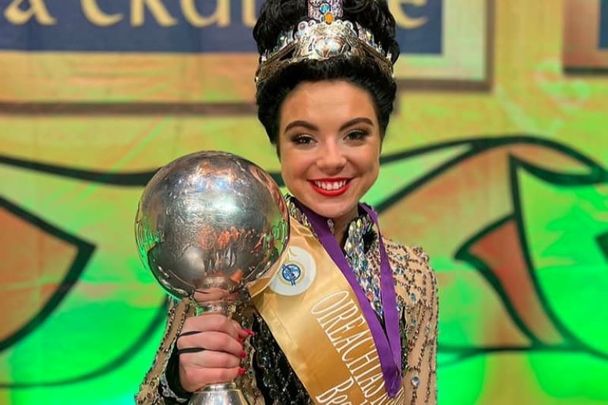 Orla Mullane Godley is the only American woman to have won a competition overall at this year's CLRG World Irish Dancing Championships that were recently hosted in Belfast.

"Winning worlds and being the only American female to bring home the title this year is indescribable," Godley, who won the Ladies 21 - 23 competition, told IrishCentral this week.

Having previously won her age group's World title in 2014 and again in 2018, Godley is a part of an elite club of Irish dancers who have won multiple World Irish Dancing Championships.

? Orla Godley 3x WORLD CHAMPION? Words cannot begin to describe how proud we are of you in achieving this title! Your...

Godley, who has been Irish dancing since she was three years old, has strong support from the Mullane Godley Irish Dance Academy in Illinois which - no surprise - she has close family ties to. Her mother Mary Alice, her aunt Peggy, and her older brother John (who won the World Championships in 2010) were her main instructors at the school ahead of this year's World Championships.

Like so many other events, CLRG's World Irish Dancing Championships, the highest level of competition in the organization, were postponed in both 2020 and 2021 due to the pandemic. Not only were competitions big and small around the world put on hold, but training, typically held in group settings, moved online for Irish dancers.

Mary Alice told IrishCentral that it was "no easy feat" for her daughter and student Orla, who practices six days a week.

"She was training on Zoom, then small group classes. Competitions were canceled," Mary Alice said. "It was stressful, but just to be able to continue dancing was important."

In February, CLRG confirmed that its Worlds competition would finally be going ahead in Belfast from April 10 through April 17. At this year's event, CLRG marked the 50th anniversary of its World Irish Dancing Championships, a milestone that was originally set to be celebrated in Dublin in 2020 before the pandemic scuppered plans.

Godley said it was "incredible" to see everyone and compete once again after the unusual two years.

"Just the feeling of being on the big stage was amazing," Godley said. "The lights, the audience, my fellow competitors all made Worlds very special this year."

"I had five really good rounds," Godley says now. "I felt good about how I danced and knew it was in the judges' hands at that point."

Ultimately, the panel of judges, 15 in all, awarded Godley with the overall top marks.

"All the hard work, the obstacles I had to overcome, the many hours of practice and cross-training just all came together at the right time," Godley said.

Let’s hear it for the World Champion, Orla Godley! ?

On top of preparing for the Worlds, which included cross-training, Godley is now in her third year at Loyola University where she is studying exercise science.

"I want to be able to work with the little dancers to achieve this and be at their top game every time they step on the stage," Godley told FeisTV after becoming this year's World Champion in her age group.

Her educational pursuits are now influencing how she approaches competition: "I think it takes a lot more than just going to dance class. What you eat and how you train outside of practice really determines how you'll dance on the stage."

Managing Worlds-level Irish dance training and college courses is no easy feat, but it was worth it in the end. Godley said: "If you have a goal, you'll do whatever it takes to get there. I did miss things, but I had to change things to get where I wanted to be and I got it, so it was worth it."