Want to know what it takes to become an Irish dance national champion? This brief clip of Cassidy Ludwig, shared online by Fusion Fighters, gives you just a small idea 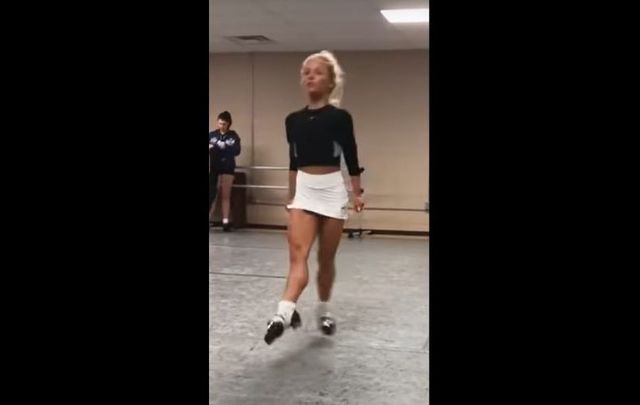 The video, hilariously entitled 'Cassidy Ludwig Isn't Human,' was shared by the Irish dance group Fusion Fighters on their YouTube page on June 9.

In it, Ludwig magically appears to barely touch the floor while still nailing her rhythms.

Since then, the clip of Ludwig Irish dancing has racked up an astounding 17 million views.

Considering how mind-blowing Ludwig looks while practicing, it should come as no surprise that she was named the 1st place champion at the recent US National Irish Dance Championships that were held in Phoenix, Arizona.

Ludwig trains with the Millenium Academy of Irish Dance & Music based in Ohio in the US. The Irish dance school enjoyed great success at the recent national event that drew competitors from the US and Mexico.

Making Ludwig's victory even sweeter, the competition was the first major Irish dance event hosted by CLRG in more than two years thanks to the global health restrictions.

Miss Cassidy Ludwig is the US National Champion 2021! 🥰We are so proud of you and your hard work❤️ So excited to see what you do in the future🔥

Last year, the Millenium Academy was rightly proud of Ludwig  when they announced she would be joining a tour of Lord of the Dance in Taiwan:

Congratulations to Cassidy Ludwig, who will be joining Lord of the Dance on their Feet of Flames Tour in Taiwan this December. We are so proud of you Cassidy!! 💚💚💚

*Cheers to Chris Naish from Fusion Fighters for sending this amazing video our way! Do you have a story, picture, or video you'd like to share with IrishCentral? Contact us at Submit@IrishCentral.com!