POLL: Do you think the Notre Dame Fighting Irish Leprechaun is “offensive”?

Share your opinion about whether or not Notre Dame's Fighting Irish Leprechaun mascot is "offensive" in our latest IrishCentral Readers Poll. 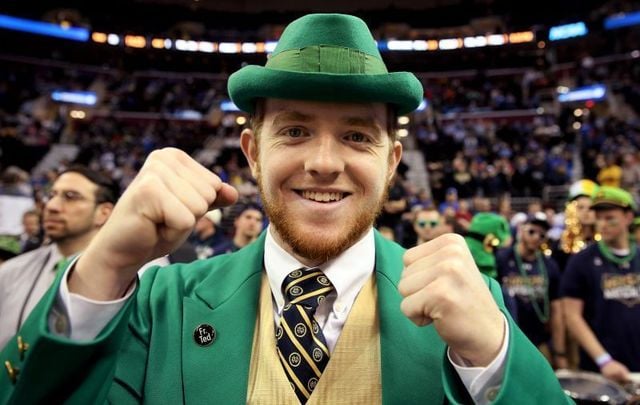 March 28, 2015: The Notre Dame Fighting Irish mascot looks on before the game against the Kentucky Wildcats during the Midwest Regional Final of the 2015 NCAA Men's Basketball Tournament at Quicken Loans Arena in Cleveland, Ohio. Getty Images

Update: This poll was closed on September 9, 2021 - check out the results here!

The University of Notre Dame’s Fighting Irish Leprechaun has been the focus of much chatter over the past week after it was voted the fourth most “offensive” college football mascot in a survey conducted by the Illinois-based Quality Logo Products.

"It is worth noting ... that there is no comparison between Notre Dame’s nickname and mascot and the Indian and warrior names (and) mascots used by other institutions such as the NFL team formerly known as the Redskins," the spokesperson said.

"None of these institutions were founded or named by Native Americans who sought to highlight their heritage by using names and symbols associated with their people."

The spokesperson added: "Our symbols stand as celebratory representations of a genuine Irish heritage at Notre Dame, a heritage that we regard with respect, loyalty, and affection."

The University spokesperson said that the term “The Fighting Irish” was reclaimed by supporters over the years.

"Irish-Americans — including those at Notre Dame — again have turned back on former oppressors as a sign of celebration and triumph," the university told the Indy Star.

"In both the upraised fists of the leprechaun mascot and the use of the word 'fighting,' the intent is to recognize the determination of the Irish people and, symbolically, the university’s athletes."

The same day the controversy kicked off, the Ancient Order of Hibernians (AOH), the largest Irish Catholic organization in the US, issued a statement which said in part: “Sadly, it appears that some seek to weaponize the Notre Dame Leprechaun as part of the continuing debate over sports team names and mascots. Lost on these misguided individuals is that unlike depictions of Native Americans, the Leprechaun is a mythical creature, not an alleged archetype of a group of real human beings.

"The Leprechaun is a beloved figure of Irish folk law, not history. As to the sobriquet 'the Fighting Irish', most accounts trace it back to the early days of Notre Dame's sports program when anti-Catholic sentiment in America was high. The fight against such hate is a fight well worth fighting, then and now, and it is a nickname to be proud of.”

So, readers, we want to know - do you think the University of Notre Dame's Fighting Irish Leprechaun is "offensive?" Let us know in our latest IrishCentral Readers Poll, here: