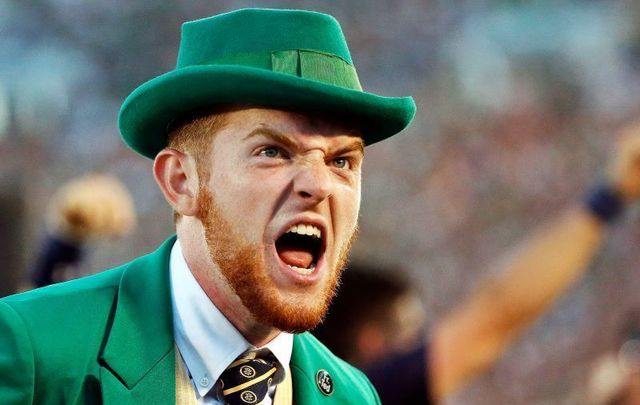 The University of Notre Dame’s Fighting Irish Leprechaun mascot has been voted as the fourth most offensive football team mascot in a survey conducted by the Illinois-based company Quality Logo Products.

UND’s Fighting Irish Leprechaun landed in fourth place in the "offensive" football team mascot survey, ranking behind Osceola and Renegade of Florida State, the Aztec Warrior of San Diego State, and Vili the Warrior of the University of Hawaii at Manoa, according to Indy Star.

The University of Notre Dame, however, has defended its use of the famous Leprechaun mascot, pointing to the institution's Irish and Irish American heritage.

"It is worth noting ... that there is no comparison between Notre Dame’s nickname and mascot and the Indian and warrior names (and) mascots used by other institutions such as the NFL team formerly known as the Redskins," a spokesperson for the University of Notre Dame told Indy Star in an emailed statement.

"None of these institutions were founded or named by Native Americans who sought to highlight their heritage by using names and symbols associated with their people."

The spokesperson added: "Our symbols stand as celebratory representations of a genuine Irish heritage at Notre Dame, a heritage that we regard with respect, loyalty and affection."

The University spokesperson said that the term “The Fighting Irish” was reclaimed by supporters over the years.

"Irish-Americans — including those at Notre Dame — again have turned back on former oppressors as a sign of celebration and triumph," the university told the Indy Star.

"In both the upraised fists of the leprechaun mascot and the use of the word 'fighting,' the intent is to recognize the determination of the Irish people and, symbolically, the university’s athletes."

Quality Logo Products appears to have since scrubbed the ranking of the "offensive" football mascots, including the Fighting Irish Leprechaun, from its blog.

An update posted on August 25 reads: “The views and opinions expressed here are those of the survey participants and do not reflect the official opinion or positions of Quality Logo Products, Inc. In response to recent feedback, Quality Logo Products has amended this post.”

According to the University of Notre Dame, university president Rev. Matthew Walsh, C.S.C., officially adopted “Fighting Irish” as the Notre Dame nickname in 1927.

The University acknowledges that there are several theories about the origination of the Fighting Irish nickname, but says that "the term likely began as an abusive expression tauntingly directed toward the athletes from the small, private, Catholic institution. Notre Dame alumnus Francis Wallace popularized it in his New York Daily News columns in the 1920s."

In 1965, the Leprechaun became the official mascot of the University of Notre Dame. Prior to then, Irish terriers served as the university's mascots.

The University says: “In keeping with the nickname Fighting Irish and the Irish folklore, the Leprechaun serves as the Notre Dame mascot.

“The Notre Dame logo features a side view of the figure with his dukes up, ready to battle anyone that comes his way. The live version is a student, chosen annually at tryouts, dressed in a cutaway green suit and Irish country hat.

“The Leprechaun brandishes a shillelagh and aggressively leads cheers and interacts with the crowd, supposedly bringing magical powers and good luck to the Notre Dame team.”