Lou Holtz, who served as head coach at Notre Dame between 1986 and 1996, defended the team's nickname and leprechaun-based logo amid recent calls to abandon them. 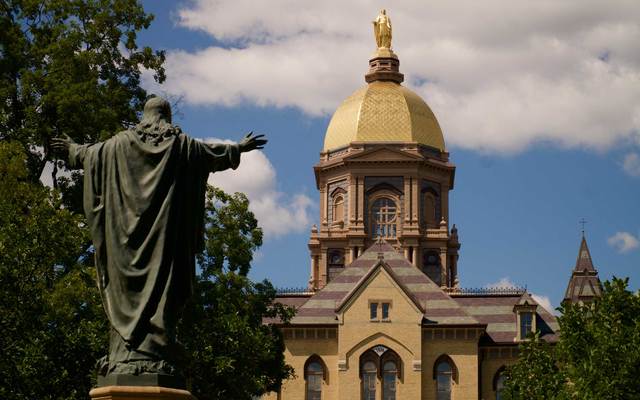 A legendary coach of Notre Dame's famous college football team has defended the team's "Fighting Irish" nickname and claimed that it originated from the college's fight against the Ku Klux Klan.

Lou Holtz, who served as head coach at Notre Dame between 1986 and 1996, defended the team's nickname and leprechaun-based logo amid recent calls to abandon them.

Holtz, however, argues that the "Fighting Irish" nickname dates back to the early 20th century when Irish students at the college joined together to disrupt a KKK meeting in Indiana in 1924.

The KKK wanted to showcase its power by holding a picnic and parade in South Bend, the most catholic area in Indiana, according to the Notre Dame website.

Around 500 Notre Dame students stormed the meeting and ripped off klan members' hoods and robes. The students even roughed up arriving clan members, forcing them away from the meeting.

Speaking on the Ingraham Angle on Fox News, Holtz said that the "Fighting Irish" nickname came from that event and argued that the college should retain the nickname and logo.

"Next thing you’re going to tell me, they’re going to topple my statue at Notre Dame. That’s when I will really get mad," he added.

Notre Dame's logo and nickname have come under scrutiny at a time when sporting teams across America and around the world have been reviewing potentially racist or offensive references.

The Washington Redskins, for example, have decided to retire the "Redskins" name after undertaking a thorough review of the controversial name. The NFL franchise will replace "Redskins" with a new name by the start of the new NFL season.