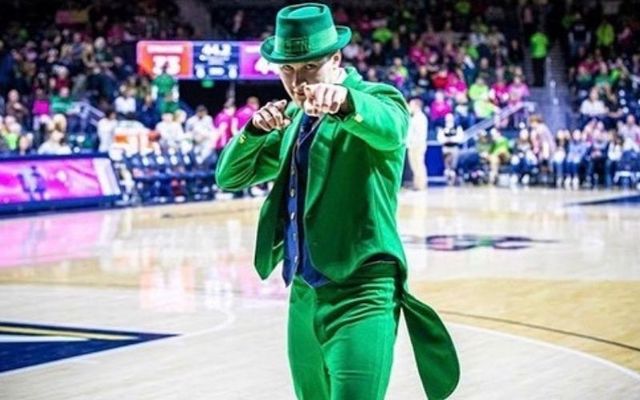 The Irishman working as Notre Dame's famous leprechaun mascot has said that being part of the school's heritage is "pretty special."

Conal Fagan, from County Derry, has been the mascot for the school's famous "Fighting Irish" football team since 2018 and said that the position was very prestigious.

"The leprechaun is such a prestigious position, so having that culture and that heritage and knowing I’m part of that is something pretty special," he told ABC57.

Fagan, who is referred to as LepreConal in the university in South Bend, Indiana, dons a green hat and suit during Notre Dame's football games and cheers on the crowd. The college's leprechaun mascot is supposed to bring good luck to the Notre Dame team.

The Derry native auditioned for the role of mascot in the spring of 2018 and became the first Irish-born leprechaun at the famous university.

However, sitting in the crowd was no longer enough for Fagan and his insatiable longing to be part of the action led him to audition to be a mascot and take up a more active role.

"I can’t emphasize enough how amazing the experience has been," he told Gaelic Grid Iron last year.

Fagan began studying at the Indiana university in 2017 and is now going into his final year.

"I was part of an academic program back home to help kids apply to America," he told ABC57.

"There's 150 people from across the UK that were applying so it’s pretty awesome to be part of that group and see kids all across the US. But I definitely picked the right college."

Fagan's father died just three months after he started studying at Notre Dame following a prolonged battle with Alzheimer's, and he said that his father would be proud of him if he could see him today.

"It was a prolonged illness so I had that in the back of my mind. But at the same time, it was what would he want me to do. I sort of see this as my legacy. Living my life through him.

For Fagan, just being on the hallowed grounds of the famous university is a reason to be proud.

"Sometimes I reflect upon and think about all the people who have been on this campus and walked on the same ground that I walked on. Every morning I wake up and see the Golden Dome out my window. It strikes me at times knowing that I’m in America and not Ireland."

The Notre Dame leprechaun and the Fighting Irish logo have come under intense scrutiny this year in the wake of the Black Lives Matter protests following the killing of George Floyd in Minneapolis.

Those protests have prompted scholars to examine images, slogans, and names through an entirely different prism and many believe that Notre Dame's leprechaun, with its hat askew and its fists raised, represents a negative stereotype of Irish people.

Irish Times writer Dave Hannigan, for example, said that the leprechaun wouldn't look out of place in a 19th-century English magazine mocking Irish people and their cultures.

Many have called on the school to remove the "Fighting Irish" nickname and the leprechaun mascot.

For now, the leprechaun remains, and Fagan believes that it is something to be proud of.