Let’s face it, the fighting Irish leprechaun hardly reflects well on the Irish no more than the dreadful term “Redskins” reflected on American Indians. 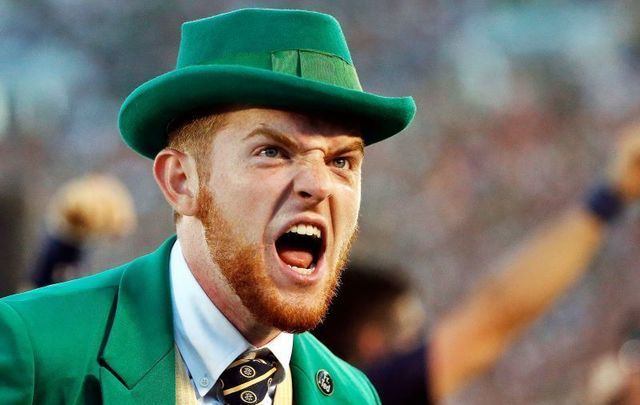 The Notre Dame leprechaun is disrespectful to Irish Americans and frankly, old fashioned.

Let’s face it, the fighting Irish leprechaun hardly reflects well on the Irish no more than the dreadful term “Redskins” reflected on American Indians.

The Redskin name was scalped - hooray for that. Unfortunately, we can’t behead the Green Goblin.

Now to the leprechaun’s future. He needs to retire to Glocamorra where there’s a twinkle in every eye and a begob and begorrah on everyone’s lips and a drink in every hand served by a bosomy barmaid who sings “Toor a Loora Loora” on demand..

The Emerald Elf  himself is angry, with his fists up, representing a stereotype as old as the Irish themselves for an alleged proclivity to argument and alcohol.We’re in “Quiet Man” territory here, haven’t moved on in sixty years.

It’s tiresome, its old and modern Ireland overwhelmingly rejects the stereotype.  Paul Krugman The New York Times  columnist, and Nobel Prize winner, called the Irish economy a sham and unleashed his greatest insult by referring to it as the “leprechaun economy”

Indeed if you hear about Leprechauns these days it's usually horror films  There’s Leprechaun in Space, Leprechaun in the Hood and at least five more Leprechaun horror productions. I think our leprechaun  luck just ran out as there are new remakes on the way.

We need to move with the times. In the land where “Game  of Thrones” was filmed, the leprechaun alickadoo is an invention strictly for gullible Irish Americans.

Some Americans are in on the joke, others, alas, believe the leprechaun should be Ireland’s national symbol.

It’s not and It’s a crock, and not of gold. It’s like making “Yankee Doodle” the American National Anthem or Yogi Bear our national symbol.

I’m sure there are many at modern day Notre Dame and its followers who would prefer an Irish wolfhound or Celtic chieftain as a more dignified representation of the Irish image.

I’m one of them. I love the campus, served on the Keough-Naughton Irish Institute Board there with great pride, go to two or more Notre Dame games a year -- but can’t stand that ugly leprechaun.

When he (or she)  parades up and down the sideline looking like he’s looking for a fight I feel like turning a water hose on him.

When the cameras flash to him after every Notre Dame score I cringe.Yes I know the underdog history and how vital that image is to the football team today, but it does not reflect modern Irish America or the Irish identity.

The game in Dublin in 2012 when 35,000 traveled from America was an incredible boost to the Irish economy in tough times.

The Notre Dame campus in Dublin is among the finest of any college in Europe.

Except for that darn leprechaun.

I vote we fire him from a cannon at the next home game (Florida State, I’ll be there) and bid him farewell as he sails into the night sky.

Then present the new symbol (Celtic warrior, Irish wolfhound, suggestions welcome). Time to pixelate the pictures of the pixie and for the green goblin to go!