IC readers get their deuces up for the Fighting Irish Leprechaun

Is Notre Dame's Fighting Irish Leprechaun mascot "offensive"? A strong majority of IrishCentral readers disagree - find out how the results turned out here. 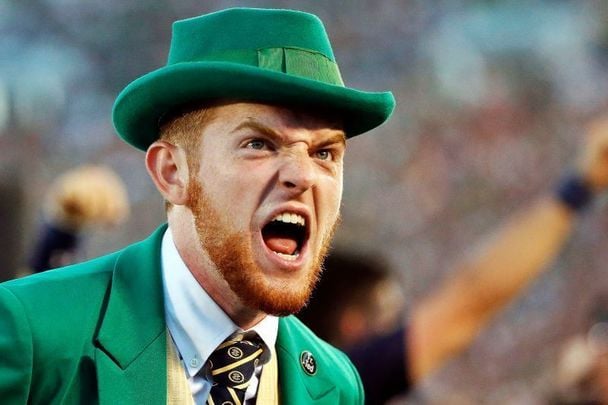 The Unviersity of Notre Dame's Fighting Irish Leprechaun is not offensive, according to a majority of IrishCentral readers in our most recent poll.

The iconic mascot made headlines in recent weeks after it was named amongst the "most offensive" mascots in college football as part of a survey conducted by Quality Logo Products.

The University of Notre Dame quickly came to the Leprechaun's defense, explaining in part that "Our symbols stand as celebratory representations of a genuine Irish heritage at Notre Dame, a heritage that we regard with respect, loyalty, and affection."

So, we decided to ask you upfront in a new poll - do you think the Fighting Irish Leprechaun is offensive?

The poll, which drew more than 750 respondents, had an overwhelming result:

Here is a brief selection from the hundreds of responses received via the recent poll:

Being born in  Ireland, brought up there , never saw anyone dressed up like that. Sorry but that's Hollywood Irish. Not the real Ireland.

It has been used to depict the Irish in an unflattering light and is so far removed from the modern Ireland that most people living in Ireland are deeply embarrassed by Irish Americans continuing embrace of this dinosaur.

Damaging stereo type ~ ignorant and disrespectful to the Irish People

It is on par with the native american misappropriated mascots. Instead of depicting the victory that was surviving British oppression and all the history that goes along with it, it reduces our plight to a perpetuation of internalized hatred.

Ireland is an outward looking European country.  Americans seem to love old symbols circa 1950...we have moved on. Get more modern representation of country.

It’s clearly based on a stereotype of drinking and fighting, one we still live with today. Any talk of high morals is absolute nonsense trying to justify racism. Similar to the Washington Redskins. Leprechauns are exclusively a myth that only Americans talk about and the notion that it is a tribute the Ireland shows just how naive they are.

It’s clearly based on a stereotype of drinking and fighting, one we still live with today. Any talk of high morals is absolute nonsense trying to justify racism. Similar to the Washington Redskins. Leprechauns are exclusively a myth that only Americans talk about and the notion that it is a tribute the Ireland shows just how naive they are.

Stereotype that should be retired. Why not go back to the ORIGINAL mascot, an Irish Terrier?

The use of a diminutive red-haired angry pugilist is a continuation of Irish-American misconceptions and misunderstanding of Irish history and separates them from, rather than celebrates their Irish heritage.

I’m first generation Irish American. And the portrayal of an Irish person always angry and fighting with a silly green outfit and facial hair is just so not a true representation. I'm fine with fighting Irish in the sense that we are hard-working, even competitive but that’s not the portrayal.

The logo is based on racist cartoons that depicted Irish people as gorilla-like caricatures. If you don’t understand why this is a problem, look up Punch Magazine anti-Irish cartoons. Your readers are mostly Irish Americans and the whole ‘fighting Irish’ thing is something they continuously uphold. For people who are actually from Ireland, this is a really embarrassing stereotype and its entire existence is due to racism/xenophobia. American people use that term because they viewed Irish people as rough and violent. It’s crazy that this is acceptable nowadays and even worse that Irish Americans think they can speak for us.

Initially I did, until I researched the origins of the symbol. Now that I know the background and that it’s a symbol against racism and sectarianism I am proud of the fighting Irish badge.

Self-chosen by Irish-Americans, and does not refer to a stereotype that reflects or reinforces ongoing discrimination or structural racism, as do Native/African American stereotypes.

Leprechauns are a magical myth, the mascot does not depict a human nor does it show ill will towards a human.

It's actually good for the Irish and Ireland as a whole. Helps promote Ireland

I am an Irish American and I love the fighting leprechaun, it reminds me of the feisty Irish spirit of the  children of Erin

I don’t believe it’s meant degrade the Irish, but rather show their strength

Because it is meant as a point of pride to Notre Dame's Irish and Catholic history.

It's a mythical character for God's sake AND it was chosen by Irish people, not imposed upon them.

Not sure if the Fighting Irish Leprechaun is offensive

Been around so long, I'm used to it. I do think a return to an Irish terrier might be good.