A Dingle, County Kerry native shares her memories of growing up alongside Fungie the Irish dolphin. 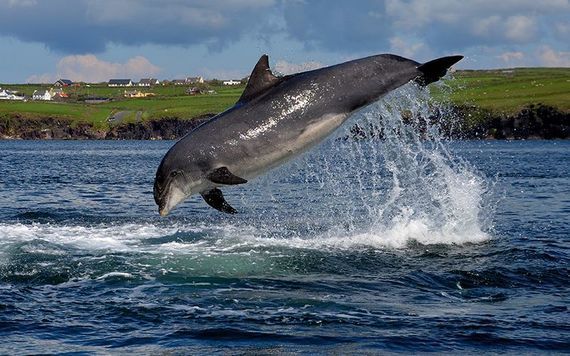 Growing up in Dingle, County Kerry around the phenomenon of Fungie, I never gave much thought to it, because for my whole life the dolphin that helped my town become famous had been there since I was born. Every summer in my living memory the town would awaken from the slumber of winter, and the tourists would arrive in never-ending droves to take boat tours out to see the Dingle Dolphin.

Fungie arrived in Dingle in 1987 when he was spotted by fishermen who noticed his friendliness and how he didn’t stray far from the harbor. They recognized him as the same dolphin by the markings on his face, that they say came from a boating accident.

Fungie was always there out in the harbor until he wasn’t there anymore, because in October 2020 after 37 years in Dingle, Fungie finally did leave. Overnight he vanished without a trace and even though there have been possible sightings of him, there has never been any real confirmation of where he went.

The last time I saw Fungie was while I was out for a stroll a month before he disappeared. This scenic route which is a favorite walking path for many locals in the area, takes you through grassy fields, past the ruins of a castle, a cove that's ideal for swimming, and finally leads to the old lighthouse.

I trekked here during one particularly foggy day, the damp mist refreshing on my face. Walking through fields with hedgerows on either side of me, I spotted a little motorboat bobbing in the water down below the cliff, the tide so far in that he was close to the cove. The man on the boat was circling the water calling and whistling for Fungie. I stopped to watch waiting to see what would happen, moments passed and I was thinking of continuing my walk, when a fin of a dolphin broke the surface, sea spray lifting in the air as Fungie splashed up and then down again.

He stayed around the boat, coming up every now and then as if to say hello. There felt like magic in the air, standing by myself watching a moment that no one else was there to witness.

When I remember Fungie or try and describe to people what he meant I retell this story. Fungie was always a moment of magic, be it if you spotted him while out on one of the tour boats, kayaking in the harbor, or just on a walk and seeing him from a cliff. The moment when you’re concentrating hard on the water, not wanting to miss him, and then the childish joy when you spot him for a fleeting second as he comes to the surface, holding back your urge to shout: ‘There! There he is!'

I don’t think we’ll ever know where Fungie went, but the certainty we do have is that he left a lasting impression on so many people's memories.