Fungie may have gone missing last October, but he has been preserved in bronze in Dingle for more than 20 years. 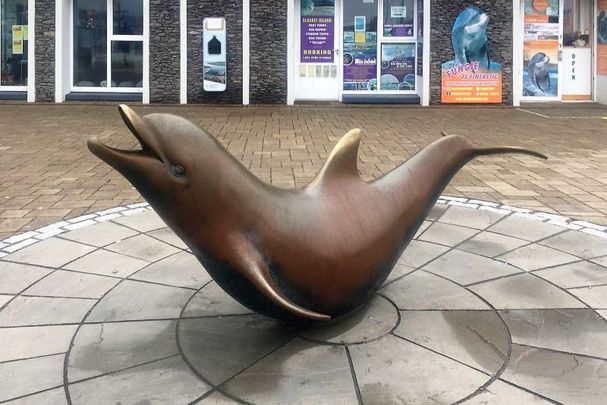 A statue of Fungie the Dolphin outside Dingle's Tourism and Information Office. Ireland's Content Pool

On this day in 2000, a bronze statue was erected in the Kerry town of Dingle in honor of Fungie, Ireland's best-known and most beloved dolphin who went missing late last year.

The statue was unveiled as part of a millennium ceremony and it has stood at the Dingle Marina outside the town's Tourist and Information Office ever since as a dedication to the dolphin who drove a huge portion of the town's tourist trade.

Fungie first showed up in Dingle in 1983 and quickly became a hit amongst locals and tourists alike due to his uncommonly friendly nature.

Fungie also regularly accompanied local fishermen as they sailed out to sea from Dingle Harbor.

A mainstay in Dingle between 1983 and 2020, Fungie was thought to be more than 40 years old, leading the Guinness World Records to declare him the oldest solitary wild dolphin in the world. In comparison, most common bottlenose dolphins have a lifespan of between 8 and 17 years.

However, Fungie disappeared last October, provoking fears that his remarkably long life had finally come to an end.

Locals painstakingly searched Dingle Harbor for any sign of the beloved dolphin over the course of several days but were eventually forced to concede that Fungie was either dead or had moved on. Either way, he was never coming back.

Fungie's disappearance will have a significant impact on Dingle's tourism trade once things return to normal. The dolphin was famous around the world and several local businesses depended on his friendly appearances to make a profit during the busy summer months.

He was a huge draw for the Kerry town and his loss will be fully felt in the summer of 2021, the first summer in almost 40 years that he will not grace the waters of Dingle Harbor.