Co Dublin and it's "wet" pubs are under additional restrictions to those announced on Tuesday as part of the government's "Framework for Restrictive Measures." 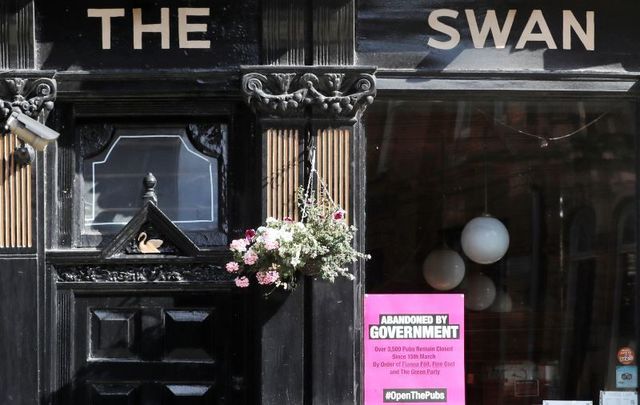 September 15, 2020: The Swan bar in Dublin with a sign outside that reads "Abandoned by Government" and "#OpenThePubs" RollingNews.ie

"Wet" pubs across the Republic of Ireland are permitted to reopen from Monday, September 21, except for in Co Dublin.

The decision to delay the reopening of “wet” pubs in Dublin from September 21 has been met with great criticism from the Licensed Vintners Association (LVA), the trade association and representative body for the publicans of Dublin.

On September 8, it was announced that Ireland’s “wet” pubs - pubs that only serve drinks and not food - could reopen from September 21 having been shuttered since mid-March. Pubs that serve food were permitted to reopen across the Republic of Ireland in late June.

Though speculation had been mounting in recent days as the number of COVID-positive cases in Dublin has grown that a reopening in the nation’s capital may be delayed, the news was confirmed earlier on Tuesday when the Irish government published its new five-level Framework for Restrictive Measures, which is a part of the government’s “Plan for Living with COVID-19.”

While the entire country has been placed on Level 2 of the new Framework, Co Dublin has been put under these additional restrictions "based on NPHET’s recommendations given concerns about the rising incidence of Covid-19 in the region:"

In a statement published after the announcement from the Irish government, The Licensed Vintners Association (LVA) has slammed the "empty gestures, hollow words from a Government that breaks its commitments."

The statement read: “One week ago, the Government had committed to not singling out the non-food pubs from other businesses, stating that if there were any regional restrictions it would affect other businesses and not solely pubs.

“Yet seven days later, the Government has ignored that commitment and has set out separate treatment for non-food pubs in Dublin who must remain closed despite the capital being kept at Level 2 in the Government’s new medium-term strategy.

“The pubs who don’t serve food played no part in the rising level of infection in Dublin, yet pubs were the only businesses singled out in the ‘guidance’ provided by NPHET last week.

“This latest blow to the pub sector in Dublin comes exactly six months since pubs across the country closed their doors by order of the Government on 15th March at the beginning of the crisis, the first sector in the country to close.

“This the fourth time the reopening of non-food pubs in Dublin has been delayed, following 20th July, 10th August, and 31st August."

Donall O'Keeffe, Chief Executive of the LVA, said: "This arbitrary separation of wet pubs from pubs serving food is completely unfair and unjustified.

“It is an empty gesture that will make zero impact on reducing the level of infection we are currently experiencing in Dublin. An empty gesture backed by hollow words from a Government that broke its commitment to non-food pubs again.

“This ongoing singling out of wet pubs is now being institutionalised in the latest so roadmap and is impossible for our members to understand and accept.”

O’Keeffe added: “One week ago the Government said that non food pubs won’t be singled out if there are any regional restrictions. Then NPHET says that the way to deal with infections, which are mainly occurring in the home, is to keep those pubs that have been shut for six months closed for even longer. NPHET says jump and the Government leaps without looking. How can anyone put any faith in a Government that just ignores its own commitments?

“Where is the scientific justification for this decision? This isn’t a remedy to the current increase in infections in Dublin. This has all the hallmarks of wanting to be seen to take action when in reality it does nothing to address the current problem. But it does have the impact of further penalising publicans, staff, suppliers, and all their families. That is the one actual outcome that will come from this decision.

“This Government and NPHET take zero action against those parts of society which have caused clusters such as meat factories or direct provision centres yet they continue to punish pubs whose doors have been kept shut for more than 6 months by order of the Government. Pubs are paying the price for the repeated shortfalls in the Government’s capacity to handle this crisis,” Mr. O’Keeffe concluded.