Pierce Brosnan and two of his sons opened up about their love of art, carrying pain, and what hard work acting is in a new spread for GQ magazine. 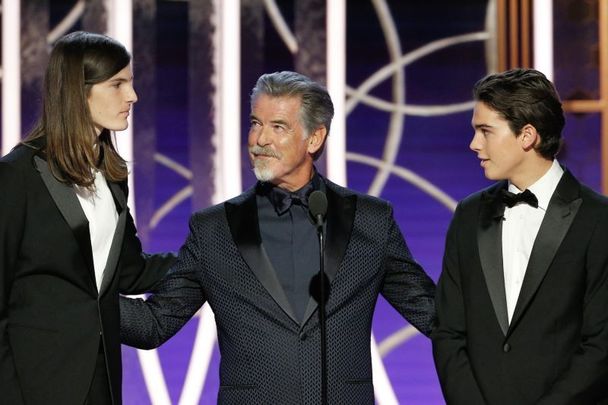 Pierce Brosnan and his younger sons Dylan, 25, and Paris, 21, are featured in quite the photo spread in the new issue of British GQ magazine.

The Brosnans are styled to the max, and though the two boys have modeled and dabbled in other creative arts, their famous dad, a native of Co Meath, isn’t keen on them becoming actors.

Brosnan spoke of his love of painting, and Paris is equally enthused. Sharing time together in a studio, the elder Brosnan thinks, is heaven.

“He just devours these canvases,” Brosnan said. “It just fills me with the greatest pride, fatherly pride, to be painting alongside him, just to be quiet in the garage or wherever we’ve painted. It’s a really beautiful experience.”

“I don’t tell anybody that, under any circumstances.” —Dylan Brosnan on the identity of his famous father Pierce Brosnan https://t.co/MFtGe3xlwp pic.twitter.com/k42Z6i69QW

Brosnan's devotion to painting – he’s sold a number of his pieces and is holding an exhibition in Los Angeles next spring – stems from the sadness he felt watching his first wife, the late actress Cassandra Harris, suffer from ovarian cancer. He started painting in 1987 and hasn’t stopped.

“Carrying the weight and pain and the fear of that illness, I took out the paints. And started painting. With my fingers. With my hands, actually,” he recalled.

“It assuages the kind of solitary life that you lead as an actor making films – sitting in trailers, sitting in parking lots, sitting in fields. Up a mountain, down a mountain. Waiting in the wings. So I create studios wherever I go.”

Brosnan will co-star with Dwayne Johnson in next month’s Black Adam, though he’s sworn to secrecy on the plot and other twists and turns.

“Black Adam, Dwayne Johnson, DC Comics. I play Dr. Fate,” was all he would divulge.

His most famous role to date is, of course, James Bond. Daniel Craig replaced Brosnan for the last five 007 films, and now he’s done, so there are all sorts of speculation as to who the new Bond will be.

“Who should do it? I don’t care,” Brosnan said. “It’ll be interesting to see who they get, who the man shall be. Whoever he be, I wish him well.”

Revealing that he saw a couple of Craig’s turns as Bond, Brosnan loved one of them but wasn’t crazy about the final film, last year’s "No Time to Die."

“I saw the last one,” he says, “and I saw 'Skyfall.' I love 'Skyfall.' I’m not too sure about the last one. Daniel always gives of his heart. Very courageous, very strong. But…”