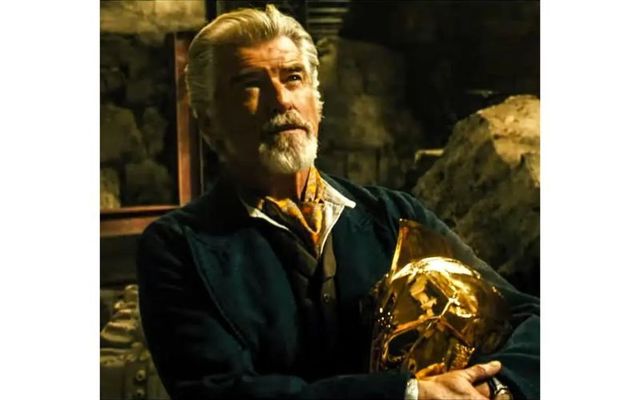 The summer belongs to "Top Gun: Maverick" and Tom Cruise, but the fall will likely be dominated by "Black Adam" and Dwayne “The Rock” Johnson.   The DC Comic antihero Adam is coming to the big screen on October 21, and featuring in a prominent co-starring role is Pierce Brosnan, one of the hardest working men in showbiz.

There’s going to be all kinds of fuss in the run-up to the highly anticipated action flick which cost in the realm of $200 million.   Pierce Brosnan has already started doing his bit, giving an interview to the website Den of Geek in which he talked about his long-time love of comics.

“I grew up in Ireland, and there was one comic book that my mother would send me all the time, and that was Dan Dare. So began my comic-book life, I suppose,” he said.

Pierce will play Doctor Fate, described as a “magical superhero” who’s gone through many iterations in the comic book series.

“Doctor Fate found me at a good point in my life; having traversed the world of James Bond and having been at the table as long as I have, it felt like a good fit. And Jaume (Collet-Serra) is such a collaborative director – he made me very comfortable and gave me the confidence to portray Doctor Fate. Down to the design of the helmet, I was a participant, so it was an education for me to find out this character was so loved and one of the oldest heroes in the pantheon of comic books,” Brosnan said.

Obviously, the 69-year-old Irish superstar has a ton of films to his credit, but "Black Adam", he says, is something special.

“I’m so excited about this film. I’ve actually never been so excited about something. I had such a great time making it with Dwayne and my compatriots,” he revealed.  “They have become dear cherished friends.”

The feeling is mutual for The Rock.  “I think you’ll be happy with Doctor Fate. Pierce Brosnan is a force and really delivers,” he said last month.