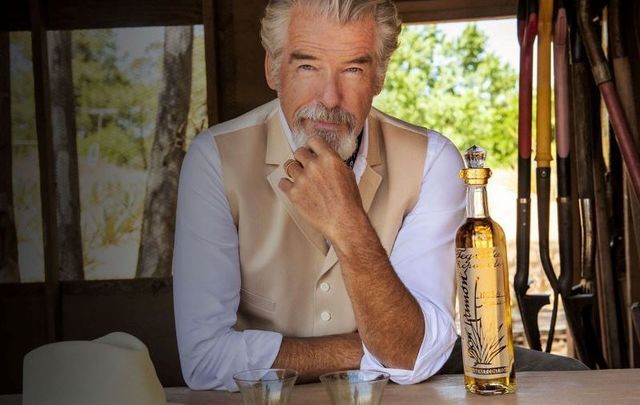 Pierce Brosnan was used to swigging martinis (shaken, not stirred!) during his time as James Bond, but these days, the Irish actor is digging some tequila, just like lots of other stars who have cashed in on the craze for the tasty Mexican adult beverage.

Pierce Brosnan, originally from Co Meath, is the global spokesperson for Casa Don Ramon tequila, which was founded in 1966 south of the border in Jalisco. Before Thanksgiving, he did a virtual tasting for the brand and answered some questions about his love of the popular drink that George Clooney made nearly a billion bucks off a few years back when he sold his Casamigos brand to spirits giant Diageo.

“I didn’t really drink spirits back in my youthful days. It was beer and wine, but you know tequila came into my life when I went to Mexico, for the first time on Remington Steele, and it was always a thing of eating the worm. That was kind of fascinating and rather nauseating, the idea to eat the worm,” Pierce said.

“Of course, I’ve since now learned that you can eat the worm and it’s not bad for you at all, but (my first time was in Mexico) on Remington Steele. and that’s when tequila came into my life; tequila shots and having a good time.”

The flavors and drink recipes offered by Casa Don Ramon hit the spot, he said.

“I did a movie in Mexico City many years ago and I would go to lunch and everyone would be sipping tequila at lunchtime. It was Greg Kinnear and I in a movie called The Matador, which we had great fun making, and (would have) just a little shot a day.”

The virtual tasting is on YouTube and Pierce is definitely enjoying the shots while talking about his storied career. He’ll be getting more involved in the design of the Don Ramon bottles too.

“I’m hoping to do an exhibit, a show, next year, and also with Don Ramon. They’ve kindly asked me to design one of their bottles – a couple of their bottles, three of them – so I’m in the process of looking at the work to see what will be appropriate for the bottles, and that’s very exciting.”