Soak up the Irish love for the holidays with the 16-day To Be Irish At Christmas 2021 program, with in-person and online events. 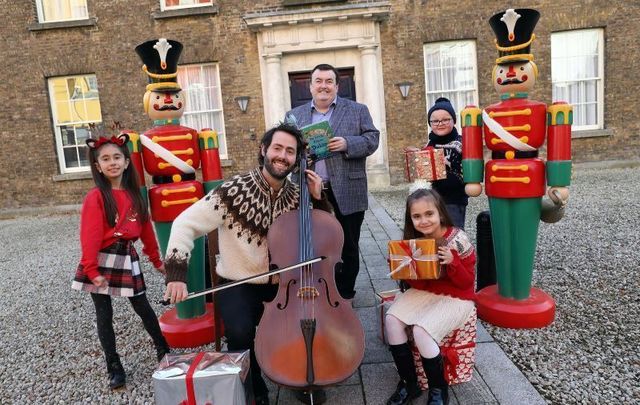 To Be Irish At Christmas 2021: 140 events over 16 days celebrating Ireland, Irish and Christmas at home and abroad. To Be Irish

Ireland's Minister of State for Overseas Development Aid and Diaspora, Colm Brophy, has revealed details of To Be Irish At Christmas 2021, running from Dec 8 to 23. The 16-day program celebrates and upholds the special connections between the Irish at home and abroad in the run-up to Christmas despite the impact of the Covid pandemic.

Built around a dedicated online platform, ToBeIrish.ie, it will feature over 140 in-person, hybrid, and online events from all across the world. As with last year’s successful program, its aim is to engage with our 70 million strong diaspora and their family and friends in Ireland - to share celebrations both traditional and new. It will showcase the best of what it means to be Irish during the holiday season through music, performances, sharing ideas, and gifts.  Everything from nostalgic Christmas recipes to extraordinary stories from Irish people living across the world.

Commenting at the program launch, Minister Brophy said: “I am delighted to announce that To Be Irish returns this Christmas bigger and better than before. This Christmas will mark the very first opportunity that many of our diaspora are able to return home since the pandemic began.

"ToBeIrish.ie has been developed for them and for those who will spend Christmas away from us, providing an opportunity to share their experiences and hopes of Christmas past and present.

"To be Irish is about Ireland reaching out to our diaspora at one of the most important times of the year and welcoming them in. It’s an exciting opportunity to engage with our diaspora wherever they are and celebrate the best of the Irish Christmas that we treasure.”

Details of this year’s initiative include:

Irish traditions and culture at Christmas

To Be Irish has a host of specially commissioned events featuring music, food, and fun at home:

- Patrick Dexter whose cello playing during lockdown outside his cottage in Mayo brought comfort for people all around the world, will perform classic Christmas performances of ‘Carol of the Bells’, Don Oíche Úd i mBeithil’ and a ‘Wexford Carol’ with 'Soda Blonde's lead singer, Faye O’Rourke.

- A Lift Home series sees duos from Ireland’s entertainment industry (ft. God Knows, MuRli and TebiRex)  buckle up and take a spin as they share authentic conversations while traveling across iconic Irish landscapes in Kerry, Limerick, and Dublin.

- From Here to There is a series of intimate interviews with some of Ireland’s brightest international stars;  Samantha Barry, Editor in Chief of Glamour Magazine, Sherlock actress Yasmine Akram and groundbreaking Irish-American Fionnghuala ‘Fig’ O'Reilly, crowned Miss Universe Ireland 2019 and NASA Datanaut.

- Reverberations From An Irish Landscape features five distinctive Irish landscapes presented as a 'sound map' of Ireland from Donegal, Cork (Cape Clear), Wicklow, Mayo, and Longford each treated by a sound artist and accompanied by a description of what was going on the day when the sound was recorded to connect people with the time and place.

- ‘Tis The Season is a Christmas e-card project featuring Ireland’s top illustrators and artists Peter Donnelly, Tarsila Krüse & Chris Judge who will each create an original shareable 2021 Christmas card.  Children aged 5–10yrs are invited to submit their best Christmas card illustrations and one will be chosen to be included in the e-card selection alongside the established artists.

- Conjuring Christmas Magic is a series of stories told by some of Ireland’s favourite characters including A Hug for you with Adam King and Tree Dogs Banshee Fingers and Other Irish Words for Nature with Manchán Magan and Steve Doogan.

Sharing Christmas abroad and at home

Tap into the Irish Christmas preparations and celebrations happening at home and all around the world from Chile to Japan and Switzerland to the United Arab Emirates. In Brisbane, Australia there will be a Christmas Eve Dinner for the Irish community who are unable to travel home this year.

In Basel, Switzerland, you can join the Basel Irish Club for Christmas Brunch. In Belgium, the Irish Embassy is hosting a virtual art session - Draw “an Irish Christmas” with beloved artist and TV legend Don Conroy.

In-person and online you are invited to join the Dubai Expo World Choir: ‘You Raise Me Up’ performance on December 9th led by renowned Irish conductor David Brophy.

To Be Irish is also an online resource for communities across Ireland wanting to share their Christmas preparations and celebrations with family and friends abroad.  These include Eimear Quinn, Live at Solstice and Christmas with André Rieu (Solstice Arts Centre,Meath), Cáirde Cheoil, a night of traditional Irish music with four musical masters: Liam O’Connor, Seán McKeon, John Blake and Padraig O’Connor,  Andean Alpacas Christmas Experience and Christmas markets in Limerick, Galway, Roscommon and in the magical surrounds of Dublin Castle.

As a nation of storytellers, hundreds of Irish have come together to share special memories of Ireland and being Irish. It includes contributions from the Irish Defence Forces, Aid Workers, Crosscare, Irish Embassies, and Consulates, as well as curated series via historian Turtle Bunbury from all around the world.

Tara McNeill, a member of Grammy-nominated Celtic Woman said “I have realized how far Irish people have traveled and the impact they have had everywhere they’ve gone. I feel it is our music and song that has been passed on through generations and has stayed at the heart of what it is to be Irish.”

Robert L. Harris, warden of Skellig Michael since 1987 and author of Returning Light: 30 Years of Life on Skellig Michael shares reflections on the turn of the seasons on the island. “It is as if the sky were filled with countless tiny moons, swimming in circles just over my head, as I stand in the monastery in the gloaming; for petrels have bright white circles on their rumps which bring the night sky to life.”

A gift from Ireland this Christmas

With a proud tradition in craft and design, the To Be Irish platform is being used to help support and promote Irish designers and retailers this Christmas. The 150 Irish crafts and gifts stores featured are a celebration of the unrivaled creativity and quality workmanship found in modern Ireland, highlighting the best of Irish printmakers, illustrators, jewelry makers, and much, much more.

As its name suggests, To Be Irish isn’t only about Christmas. Those traveling home for the holiday, and many of those who can’t, will want to return later in the year. We want to let our Diaspora know that, no matter what time of the year, there is a special welcome waiting for them and plenty of support from our hospitality and travel sectors to help them reconnect with family and friends and to re-explore Ireland.