Irish American Patrick Murray, who previously played in the NFL, says he has always had ambitions to play GAA for New York. 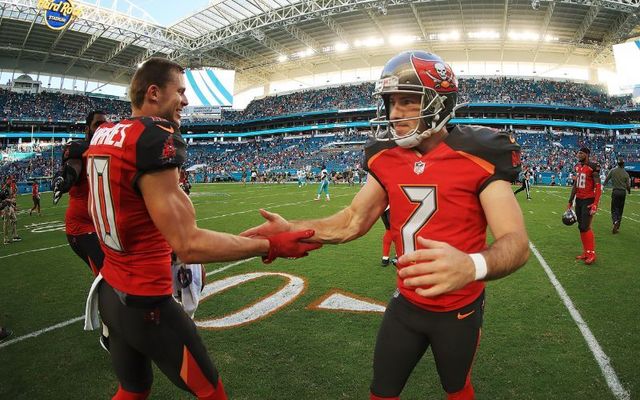 Patrick Murray #7 and Adam Humphries #10 of the Tampa Bay Buccaneers after the win against the Miami Dolphins at Hard Rock Stadium on November 19, 2017, in Miami Gardens, Florida. Getty

Murray, who spent three years with Tampa and one year with the Cleveland Browns, has strong GAA links, with two of his uncles, Brendan and Ciaran Murray, playing for Monaghan and winning Ulster titles in the 1980s.

Although he spent his summers in the Monaghan town of Clones, Murray was raised in New Jersey and naturally gravitated toward more accessible sports in his youth.

"We grew up just outside of New York and obviously have two NFL teams here in the Giants and Jets. They play in New Jersey but they’re New York obviously. So he always knew that there was an opportunity for his sons, myself and my brother, to kick," he told Irish sports site Pundit Arena.

Murray said he played soccer, GAA, and baseball as a kid, adding that his dream was to play soccer for Scottish club Celtic.

However, his father wanted his children to assimilate into American culture and urged him to try his hand at American football.

"Dad said, ‘Look, I’m not sending you to Scotland when you’re 12 years old. You’re going to stay here with your mom and your brother and I and maybe try this football thing'."

A few years back, Murray told RTÉ Sport how Gaelic football training influenced his American football finesse: "The way I kick a ball is the same way I would kick a Gaelic ball because that’s how I was brought up. Every year we were kicking ball in St Tiernach’s Park [in Co Monaghan].

"I did watch a lot of YouTube videos of Ronan O’Gara and mimicked his style a little bit but I would equate my style of kicking more with a Gaelic footballer.

"I’m a lot smaller than a lot of guys (5'7) so I’m more compact. I think the biggest difference is that I have a fluidity to the way I kick the ball. It’s very loose and relaxed. When I plant the leg and strike the ball there’s a whip.

"The Gaelic ball is a lot heavier so it helped me create that strength, power, and whip, and I brought that over to American football.

"When it came down to it, when I was standing over a free in Gaelic Park, I would take three steps back and two steps over, like in American football and that’s how I kicked."

Murray, who is now 31 and spends most of his time in Florida, has recently started training with Rockland GAA in New York and has previously trained with the New York GAA senior football team.

Speaking ahead of this year's Aer Lingus College Classic between the Nebraska Cornhuskers and the Northwestern Wildcats, he told Pundit Arena that he has his eye on making an appearance for New York in the Connacht Senior Football Championship.

I'm delighted to help @Failte_Ireland welcome American Football back to Dublin on Saturday 27th August at the Aviva Stadium for the Aer Lingus College Football Classic!

Tickets for the match are on sale now and can be purchased at https://t.co/nPItjrmkng. #TouchdownDublin pic.twitter.com/sd8sMSTfTg

"I always have ambitions to play for New York. I’m 31 years of age now so I think I have a couple of years left in me. Living outside of New York now obviously in Florida, it’s a bit harder to get back," he told Pundit Arena.

Murray has witnessed first-hand the development of American-born players at clubs like Rockland and St. Barnabas and believes that New York has the potential to spring a surprise in the Connacht Championship in the near future.

New York has yet to win a game since joining the Connacht Championship in 1999, although they have come close to victories against Sligo, Roscommon, and Leitrim.

On This Day: Irish American Hollywood star Gene Kelly was born in 1912