Celtic FC was started in 1887 to raise money for poor Irish immigrant families in Scotland. The Irish influence is still felt today. 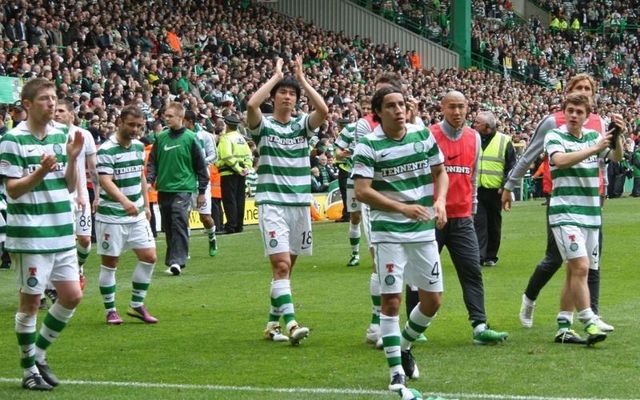 Players of Celtic F.C. on the final day of the 2010/11 season Wikimedia Commons

Started in 1887 to raise funds for poor Irish families in Scotland, the Irish can still be felt on Celtic Park today in the Irish folk and rebel ballads sung and the flags that flutter above the stand.

Glasgow Celtic FC was born out of the impoverished streets the immigrant Irish called home in the Glasgow of the 1800s when a Marist Brother from Ballymote, County Sligo sought to find ways to help his fellow countrymen there.

Andrew Kerins, better known as Brother Walfrid, called for a meeting on November 6, 1887, to establish a football team for the local area of the east end of Glasgow with the aim of raising funds for its struggling Irish families. In a small back room in St Mary’s Church hall on Forbes street, those assembled there under Brother Walfrid's orders established a new football club for Glasgow.

Names suggested for the new local team included Glasgow Hibernia and Emerald Harps but, the steadfast Brother Walfrid had the last word, and, on his insistence, the new club was called Glasgow Celtic. The name was chosen as a symbol of a club born in Scotland from Irish roots.

The first jersey of Glasgow Celtic was all white with green collars. On the breast of the jersey was a large red Celtic cross.

Celtic's first game was played the following year, and it was against a neighboring club called Glasgow Rangers. One hundred and thirty years ago, on May 28, 1888, Celtic's first match was also the first Old Firm between Celtic and Rangers and the bhoys came out on top with five goals to two. From then on, a beautifully intense rivalry flourished between the blue and green sides of Glasgow, a rivalry still very much intense 130 years later!

Celtic quickly built a loyal following among the Irish community in Glasgow. The weekend matches provided Irish immigrants with a meeting point and from it developed the club's Irish parish mindset.

The Irish roots of Celtic were solidified when their home ground Celtic Park was opened in 1892. The great occasion saw Mayo man and Land League leader Michael Davitt turn the sod in the middle of the pitch which had shamrock from Donegal planted in it. T.D Sullivan who wrote the ballad God Save Ireland closed the ceremony with a rendition of his patriotic song.

Not long after the grand opening of Celtic Park, the sod in the center circle with the Donegal shamrock was dug up and taken by thieves. The mystery of who took it remains unsolved but, many pointed the finger at those on the blue side of Glasgow and for years afterward the unknown thief was dubbed  "the sod who robbed the sod!"

Michael Davitt did not have much interest in football but could understand the vital role Celtic played among Irish immigrants in Scotland. Davitt was made honorable patron of the club and in 1894 he was presented to the crowd at Celtic Park before Celtic's meeting with Clyde.

Davitt took his 5-year-old son with him and the lad sported a large green rosette and a white cap with Celtic emblazoned across it in orange lettering. After the game, Davitt was presented with a gold Glasgow medal at a dinner held in his honor and he was given  £60 from gate receipts for eviction relief aid in Ireland.

The charitable stance of Celtic had always been at the heart of club ethos. In 1892 Davitt wrote an open letter to the Freeman's Journal praising the Glasgow club for sending £30 to Mayo for eviction relief aid. In the letter, Davitt declared "the members of this renowned athletic association are young Irish men who are generous supporters of every national and good cause."

In the same year that Celtic moved into their home ground Celtic Park, Brother Walfrid moved to London. He had hoped to replicate the same Irish club in the English capital among its large Irish community there but, a London Celtic never materialized.

Brother Walfrid later moved to France where in 1911 he met up with the club he founded in a small church hall in Glasgow in 1887. While on a European tour, the Celtic team paid a visit to the now elderly Brother Walfrid and had a celebration dinner in his honor. He returned to Scotland shortly before his death there on April 17th, 1915. Brother Walfrid now lies in Mount St Michael Cemetery in Dumfries.

In 1897 the club directors decided to bring Celtic in line with the developing professional game and they appointed a full-time team manager. They appointed 29-year-old Newry born Willie Maley who guided Celtic to a league title in his first year in charge. Maley would manage Celtic for 43 years and lead them to 30 major trophies. Such a long managerial career at one club would be unheard of in today’s game!

Before the appointment of Willie Maley, Celtic would buy players from other clubs. It drained the club’s finances and did not reflect on the community foundations of Celtic. Maley decided to recruit players from nearby schools and streets. An established club academy made sure that a parish sense of pride strung out through the team and its fans.

Celtic's fan base is legendary and today in Scotland, Ireland, and across the globe you can find Celtic supporters clubs usually named after past players or Irish martyrs. Since the Celtic's earliest  games they attracted strong support that followed them home and away and this was a fan base that grew out of 'Brake Clubs.'

In the early days of Celtic football, fans of the club from different streets in Glasgow would travel to games on large horse-drawn brakes and they became known as Brake Clubs. They would carry big banners proclaiming their street or parish, along with a picture or name of a player from that area. This tradition continued on when the automobile replaced the horse and fans packed into buses with flags, banners, flutes, and bugles! They were usually heard before they were seen!

The Celtic fans sang songs such as The Rising of the Moon and The Mountains of Mourne. The singing tradition of Celtic fans intensified in the 1920s when the so-called "shut the window" songs were sung out at home and away games, songs such as the Merry Ploughboy and Kevin Barry. To this very day, Irish folk and rebel ballads continue to be a staple of the Celtic fan's songbook.

The shamrock in the center circle at Celtic Park may be long gone but the same songs and Irish sentiment remain. Just look up at the flags that flutter above the stand at Celtic park - flying with pride next to the Saltire of Scotland is the tricolor of Ireland!