Ireland’s National Famine Commemoration will be marked by Scottish soccer club Celtic FC, which was founded to alleviate the poverty of Great Hunger Irish immigrants in Glasgow. 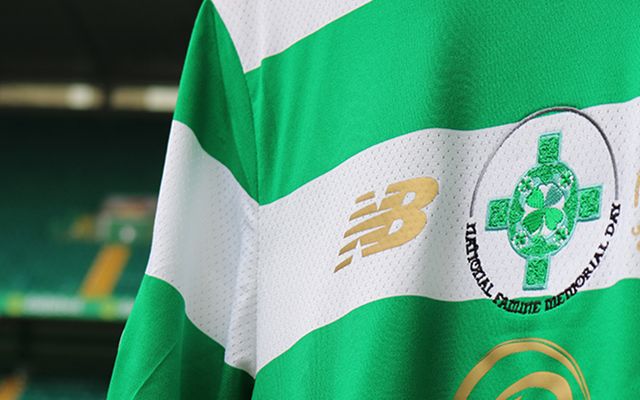 Irish famine victims will be remembered by Scottish soccer club Celtic FC this weekend as they don jerseys designed with a Great Hunger symbol.

Scottish soccer club Celtic FC are to wear jerseys designed with a symbol commemorating the Irish Great Hunger as they take to the field this weekend. Marking Ireland’s National Famine Commemoration which takes place tomorrow in Co. Tipperary, the team will wear the Celtic Cross logo in honor of the event as they play Hibernian at Celtic Park.

The Glasgow-based club has a growing tradition of wearing the National Famine Memorial Day logo on their jerseys on occasions when Ireland remembers the one million who died during the Irish famine, as well as the one million more who emigrated to escape hunger, a significant percentage of whom would have settled in Glasgow.

Regarded as something of an Irish soccer club based abroad, Celtic FC has its roots in the Irish immigrants who fled to Scotland to escape the Irish famine. Being initially established in 1888 with the purpose of alleviating the poverty of the Irish population living in the East End of Glasgow, the club was established completely for charity purposes to help victims of the Great Hunger before some Irish locals saw the potential to make money and developed “The Bhoys” into one of the most successful teams in the Scottish League.

Celtic FC has made a habit of commemorating its Irish roots

In honor of its origins, the complete Celtic football club squad will this weekend be wearing a jersey marked with the National Famine Memorial Day logo as Ireland remembers the transforming event which changed the demographic and cultural landscape of the country forever.

“The origins of Celtic Football Club will forever be connected to the Great Famine and it is hugely important that we once again mark this annual memorial,” said Celtic Chief Executive Peter Lawwell.

“Celtic was established as a force for good, a vehicle to support people in real need, people whose families had previously escaped the devastation of the Great Famine.

“The club’s ethos and traditions are born from these events and these values of charity and community will never change.

“It is important that we always remember the devastating and lasting effect which the Famine had on the lives of so many millions of people and we are pleased again to play our part in this year’s commemoration."

Read more: Amazing discovery about woman in this iconic image from Great Hunger

“Sadly, the plight of hunger still stalks the world today. Our commemoration of the sufferings of our own past can only strengthen and increase our sense of empathy and understand with those societies afflicted by this scourge in our own era.”

Glasgow already has its own Irish Famine memorial

St. Mary's in Canton, the place where Celtic FC was founded.

When the memorial was recently unveiled, however, paying tribute to both Irish victims of famine and Scots who died during the Highland Potato Famine in the 1840s, the Coiste Cuimhneachaín An Gorta Mór (The Great Hunger Memorial Committee) deemed it offensive to jointly commemorate the Irish and Scottish dead together and branded it as an act that showcased the sectarianism that has existed between Glasgow City between Catholics and Protestants.

The committee is now looking to establish their own Irish-only memorial on the grounds of St. Mary’s Church, the place where Celtic FC was founded by Irish Marist Brother Walfrid.

Celtic FC is historically known as an Irish Catholic club

There have always been large levels of movement of people between Northern Ireland and Scotland, due to their close proximity as countries and to historic acts of colonization by the British, such as the displacement of Irish Catholics in Ulster and the mass relocation of Protestant Scots to the area during the Ulster Plantation. This has seen a large mix of Protestant and Catholic populations in both countries, which in turn led to sectarian rivalry and violence on either side of the sea.

While most people know of the Troubles in Northern Ireland, which although not exclusively based on religion was heavily divided between Catholics and Protestants, Glasgow has also seen its own smaller-scale sectarian rivalry between Irish Catholic emigrants and their ancestors, and the Protestant Scots.

Read more: “The famine is over it’s time to go home” graffiti in Scotland treated as hate crime

This tension has historically come to a head in the form of the sometimes violent rivalry between Glasgow city’s and Scotland’s two largest football clubs (known collectively as the Old Firm): Celtic F.C, regarded as an Irish Catholic club, and Glasgow Rangers F.C, the Scottish Protestant club.

The club’s rivalry heightened as the Troubles’ violence escalated and some regard it to have more of an association with Northern Ireland politics than with Scotland itself. The majority of both clubs’ fans do not engage in sectarianism.

What do you make of Celtic FC commemorating the Irish famine in this way? Should more clubs and sports teams do the same? Feel free to leave us your thoughts in the comments section, below.