The Irish National Famine Commemoration Day is to be set on the second Sunday of May each year. 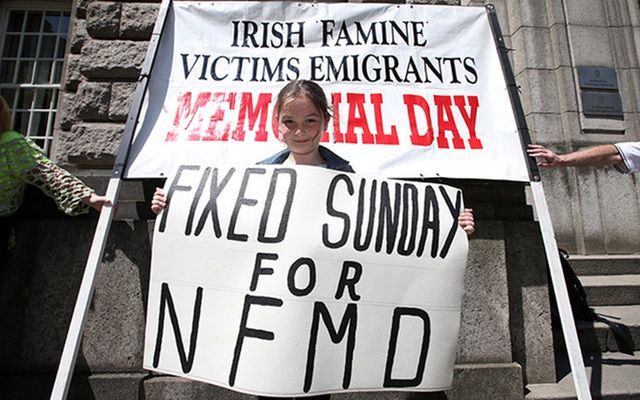 Ciara Blanch (7) from Tallaght Dublin joined people demonstrating outside the Department of Jobs, Enterprise, and Skills. They are campaigning for a specific day for the Irish Famine Victims Emigrants. RollingNews.ie

The Irish government is to set the second Sunday in May as the official annual National Famine Commemoration Day. Since 2008, the commemoration has been held in and around this date, moving to a different host town each year. The flexibility of the date has meant that many Irish people are unaware of its existence, according to Fine Gael TD Colm Brophy, who last week introduced a Bill with the intent of holding the commemoration on a fixed date.

“Very few talk about this event and even fewer children in our schools learn about this day when they study the Great Famine as part of the school curriculum. Today’s Bill will ensure this event is given due status and recognition and will fix the second Sunday in May as the annual National Famine Commemoration Day.”

The Bill was welcomed by Irish Minister for Arts, Heritage, Regional, Rural, and Gaeltacht Affairs Heather Humphreys, who had previously backed such a proposal, but only after initially opposing it. Humphreys had argued against a fixed date on the basis that it would be too difficult to ensure that the Taoiseach (Irish prime minister) and Irish President could be free on the same day each year.

“While the National Famine Commemoration Committee has endeavored to hold the ceremony on the second Sunday of May each year, there has up to this point been a degree of flexibility in relation to the date of the commemoration,” Humphreys said.

“The location of the commemoration changes each year and the local community is usually consulted in relation to proposed dates to allow organizers to develop a fitting program of locally organized events, many of which have been tied in with dates of important local significance.

“Fixing a date for the annual commemoration is something I have given consideration in recent months. While recognizing that it could pose some challenges for the host community each year, I believe these challenges can be overcome.

“Fixing the date for the Famine Commemoration will illustrate that the State views it as a very important commemoration, for Irish people and our Diaspora, to reflect on that terrible period in our history and remember the horrific impact it had on this island and our people.

Read more: Ireland should have a national day of commemoration for the Great Hunger

The National Famine Commemoration Day was first marked in 2008 and was an attempt at creating one dedicated day in the year for Irish citizens and the diaspora around the world to reflect on one of Ireland’s most significant historical events, which resulted in the deaths of one million people from starvation and the immigration of a million and a half more.

The National Famine Commemorations have moved from county to county each year. However, the date on which the famine Irish have been remembered has also varied, drastically delayed in 2016 from May until September so the event would not be overshadowed by the many events to mark the 100th anniversary of the Easter Rising.

Read more: Australia to honor the young Irish orphans shipped over during Famine

“The Great Famine marked a watershed in our history,” Brophy added.

“It was not inevitable that Ireland would suffer this famine but a combination of circumstances and inept response by the British administration combined together ensured that the Famine would turn into one of the greatest tragedies of the 19th Century.

“President Higgins said something incredibly impactful at last year’s Commemoration event. He said that: ‘’We now have the capacity to anticipate the threat of Famine, we have the capacity to take measures to avoid it, and yet we allow nearly a billion people across our world to live in conditions of extreme but avoidable hunger.”

“By introducing a fixed day of commemoration, the second Sunday in May, this Bill is bringing certainty to this important day where no such certainty currently existed. As a society, we must remember our past appropriately to learn where we’ve come from. That is the only way we can navigate successfully towards the future.”

Do you think that the National Famine Commemoration Day should be held on a fixed date each year? Let us know your thoughts in the comments section.