Celebrate your Irish roots this Halloween with these brilliant Hollywood horror flicks... that have Irish roots. 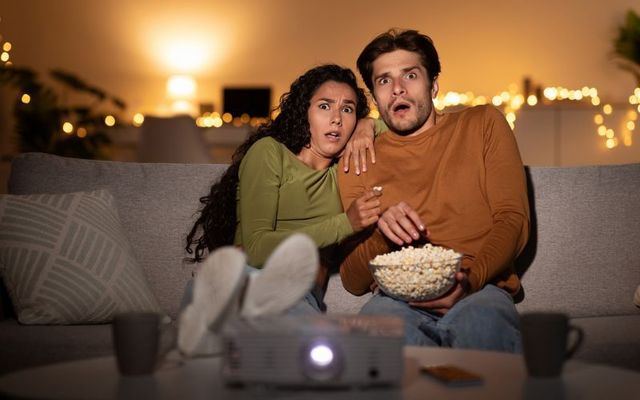 Grab yourself a cushion to hide behind, throw on Netflix or wherever you stream and be prepared to be terrified.

The Irish make a great horror movie. I mean, the landscape itself just instantly lends itself to the horror genre and combines that with the rich and terrifying Irish folklore and mythology and you have a recipe for a truly spine-chilling horror film.

And, of course, the Irish had a hand in the most frightening day of the year. Did you know that Halloween has Irish roots?  The spooky holiday was created by the Celts as the day of All Souls when ghosts walked the land and the undead spoke.  The 2,000-year-old ancient Celtic festival is called Samhain (pronounced sow-in).

In celebration of the upcoming Halloween holiday and its Celtic Samhain origins, we’ve compiled a list of ten great Hollywood horror flicks that have Irish roots.

This 1994 film, by Irish director Neil Jordan, was a huge hit with both audiences and critics.

Tom Cruise plays the charismatic villain, Lestat, who turned Louis into a vampire in the 18th century in order to make him his companion. Louis hates being a vampire, but Lestat convinces him to turn a little orphan girl, Claudia, into one as well, and together Louis and Claudia live on through the centuries.

A classic vampire tale from a great Irishman.

Another installment of Anne Rice’s “Vampire Chronicles," "Queen of the Damned" was brought to the big screen in 2002 and an Irish actor took over the role of Lestat.

Stuart Townsend appeared opposite the late R&B singer Aaliyah in the movie.

The Dubliner portrayed the legendary vampire Lestat, who, after many years of sleeping in his coffin, awakens to a modern world unfamiliar to him. Lestat decides to become a rock star and his music awakens the ancient Akasha, Queen of the Vampires and the Damned.

The film may not have received rave reviews, but it rocketed its Irish star into the spotlight – so job well done!

Dubliner Stoker wrote the classic novel in 1897, introducing the world to the now iconic character, the modern-day vampire, and Coppola helped solidify that image with his film (though he certainly made the repressed Victorian sexuality within the novel a bit more overt).

The horror movie, starring Gary Oldman as Dracula, Winona Ryder as Mina Harker and Keanu Reeves as Jonathan Harker, was a huge hit, and some even consider it to be one of the best films of the 1990s.

Coppola – you owe it all to Bram!

Not one for those with a weak stomach but hilarious nonetheless, "Grabbers," directed by Jon Wright, is a fantastical, silly and gruesome laugh-fest that could only really be set in the Emerald Isle.

A small rural Irish village is taken over by monstrous sea creatures thriving in the rain and drizzle of the Irish climate and killing off as many people as they possibly can. However, they have one weakness – alcohol. Yes, alcohol is their kryptonite and if you keep enough of it in your system the terrors won't be able to touch you.

A village trying to stay as drunk as possible in order to stay alive makes for incredibly funny viewing.

Coppola incorporated the Irish in one of his earlier horror movies as well – “Dementia 13.”

The film, which was the director/writer’s first mainstream film, was shot in Ireland in 1963.

The thriller tells the story of a woman named Louise whose Irish-American husband dies. Louise wants in on her wealthy Irish mother-in-law’s will, so comes up with a scheme to get the cash. Her plan involves traveling to Ireland to visit her late husband’s family castle.

Her scheming ways are interrupted, however, when a maniac begins murdering members of the family.

“Dementia 13” got mediocre reviews, but most critics agreed: the Irish setting made the movie.

Back again to some great Irish direction – Neil Jordan had a great pseudo-horror film back in 1984 called “The Company of Wolves.”

In the movie, which is made up of several Gothic tales, Jordan tackles werewolves and their sexual connotation.

Angela Lansbury stars as Granny, who tells her granddaughter Rosaleen stories about innocent girls falling for handsome strangers with heavy brows, and then suddenly disappearing when the moon is full. Naturally, Little Red Riding Hood pops up in one of the stories, with Granny being eaten by the wolf.

Nobody tells folklore tales better than the Irish!

No, this classic Irish Disney film isn’t traditionally classified as “horror,” but its banshee scenes make it a contender in the Irish scary movie contest, or at least when you were little.

The 1959 adventure film set in Ireland starred Sean Connery (and his awful Irish accent) as the hero Michael McBride.

Darby O’Gill is an elderly storyteller who tells tales about leprechauns and banshees to locals at the pub.

The Ireland of this film is actually enchanted, so Darby has many a run-in with leprechauns like the 21-inch King Brian.

The horror comes into play when the banshee shows up, heralding the death of Darby’s daughter (and Michael McBride’s love interest), Katie.

But this is a Disney Irish horror movie, so naturally, all turns out right in the end.

The 1993 film, which starred a young Jennifer Aniston, is admittedly ridiculous, but it certainly offered up a brand new (twisted) view of leprechauns!

Dan O’Grady steals a leprechaun’s pot of gold from Ireland and brings it back to the U.S.

Little did O’Grady know the angry leprechaun would follow him back. O’Grady barely escapes the deadly leprechaun but manages to lock the little Irish lunatic in his basement.

Fast-forward 10 years to when J.D. and his spoiled daughter Tory (Aniston) move into the house.

The leprechaun is accidentally released, and wreaks havoc on the town, killing anyone who goes near his gold.

Quality Irish horror film? Definitely not. A good Irish gorefest to watch for a laugh? Absolutely!

Yes. Believe it or not, “Leprechaun” was a big enough success that they decided to make four sequels between 1994 and 2000.

Here’s a quick rundown of these Irish horror gems:

“Leprechaun 2” - The evil Leprechaun comes to claim the bride of his dreams (or nightmares?) on his 2000th birthday.

“Leprechaun 3” - The Leprechaun, now a statue, travels to a Vegas pawn shop, where the owner mistakenly sets him free.

“Leprechaun 4: In Space” - On a distant planet, everybody’s favorite deadly Leprechaun kidnaps Princess Zarina, and plans to make himself king, but not if a group of U.S. Marines can stop him!

“Leprechaun in the Hood (a.k.a. “Leprechaun 5”) - The Leprechaun is back – but this time, he goes on a killing spree in Compton, Los Angeles.

Also in the horror-comedy-drama genre is a film that stars an Irish acting heavyweight.

The 1999 film, about a man-eating crocodile that picks off tourists in beautiful Lake Placid, also stars Bridget Fonda, Bill Pullman, and Oliver Platt.

Great actors, not so great film. But in IrishCentral’s opinion, the beloved Irishman Gleeson can save any movie!

Last, but not least, is another thriller starring a popular Irish actor.

The movie, made in 1983 and co-starring acting great Ian McKellen, tells the story of a group of Nazis, who guard a Romanian citadel, or “keep,” the locals fear is haunted.

One by one the soldiers are killed by an evil force in the keep, and the Nazis have no choice but to seek the help of a Jewish father and daughter to translate manuscripts and help stop the murders.

“The Keep” was once voted one of the most underrated films of all time, so it’d be a perfect Irish scary movie to download or rent this Halloween.

What's your favorite Irish horror movie? Let us know in the comments section, below.