Dropkick Murphys have announced their 2022 St. Patrick's Day Tour after two years of going virtual amidst the pandemic. 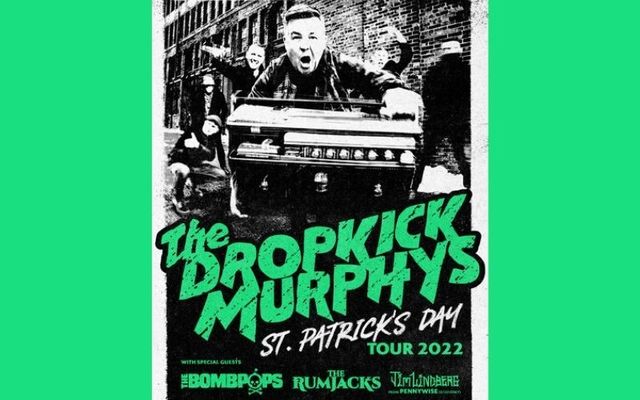 Dropkick Murphys are excited to bring back tradition in 2022 with the return of their St. Patrick’s Day Tour, kicking off February 21 in Reading, PA, and culminating with the band’s customary run of St. Patrick’s Day week hometown shows in Boston, MA -- including three shows at House Of Blues and one at Roadrunner.

Dropkick Murphys will be joined by special guests The Bombpops and The Rumjacks for most shows on the 22-date run. Jim Lindberg of Pennywise is also confirmed as a special guest for the March 20 Boston show, performing in support of his new Ted Hutt-produced solo album Songs From the Elkhorn Trail, out digitally November 19 via Epitaph.

Tickets go on sale this Friday, November 12 at 10:00 AM local time in most tour markets at DropkickMurphys.com.

We’re excited to announce the 2022 St. Patrick’s Day American Tour !! We’ll be joined by @thebombpops & @Rumjacks on this tour - and our friend Jim Lindberg from @Pennywise will support the final show of the tour on 3/20 at the new Boston venue Roadrunner. Tix on sale Friday! pic.twitter.com/q0hdUp6kw9

Along with Streaming Outta Fenway in 2020 – the first-ever concert performed on the hallowed infield of Boston’s Fenway Park – and the band’s Turn Up That Dial Album Release Party in 2021, these four free livestreamed concerts (with no in-person audience) were watched over 17 million times, raised hundreds of thousands of dollars for DKM’s charity The Claddagh Fund and other nonprofits, and were featured right here on IrishCentral, as well as CBS This Morning Saturday, CNN, NBC Nightly News, The Late Show With Stephen Colbert, and in the Wall Street Journal, Forbes, and many more.

From August through mid-October of 2021, Dropkick Murphys returned to the road for their first live shows since the pandemic began, touring the U.S. with Rancid on the co-headlining Boston To Berkeley II Tour, which also featured performances at Riot Fest in Chicago and Aftershock in Sacramento.

Overall, Dropkick Murphys’ music has generated half a billion streams, they’ve quietly moved 8 million-plus units worldwide and the band has sold out gigs on multiple continents.

Dropkick Murphys proudly remain Boston’s rock ‘n’ roll underdogs turned champions. Since 1996, the boys have created the kind of music that’s meant to be chanted at last call, in packed arenas, and during the fourth quarter, third period, or ninth inning of a comeback rally.

Their celebrated discography includes four consecutive Billboard top 10 album debuts (2021’s Turn Up That Dial, 11 Short Stories Of Pain & Glory, Signed and Sealed in Blood, Going Out In Style), along with 2005’s gold-selling The Warrior’s Code, featuring the near double-platinum classic “I’m Shipping Up To Boston.”

In 2020, the band was one of the first to embrace streaming performances, starting with their Streaming Up From Boston St. Patrick’s Day virtual performance. It was followed by last year’s landmark Streaming Outta Fenway livestream, which drew more than 5.9 million viewers and held the #3 spot on Pollstar’s “Top 2020 Livestreams” chart. Dropkick Murphys St. Patrick’s Day Stream 2021...Still Locked Down was #1 on Pollstar’s Livestream chart for the week ending March 22, 2021, logging over 1 million views.