Chelsea Clinton's surprise cameo in the finale of "Derry Girls" left some US fans less than impressed. 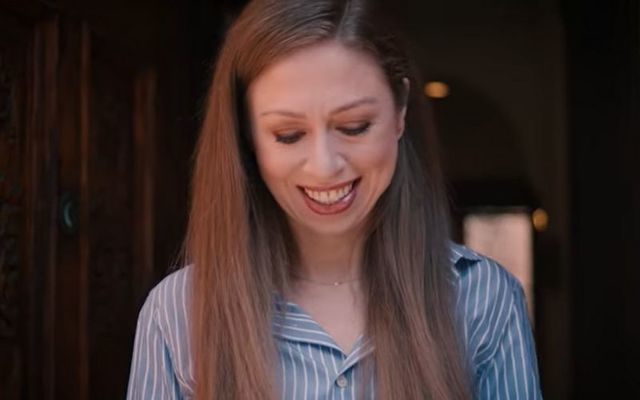 Some "Derry Girls" fans have hit out at Chelsea Clinton's surprise cameo in the series finale of the popular sitcom that arrived on US Netflix on October 7.

The third season of Lisa McGee's "Derry Girls" aired months ago, but its recent release on US Netflix has seen renewed interest in the series.

In a special hour-long episode entitled "The Agreement," set one year after the last regular episode of the series, the four girls and James return to our screens one last time to cast their votes in the historic Good Friday Agreement referendum.

The show ends poignantly, capturing the show's main characters and notable recurring characters as they cast their votes.

However, the episode doesn't end there, to many people's apparent dismay.

In a final clip, set in present-day New York, Chelsea Clinton receives a letter from Orla, Michelle, Clare, Erin, and James that was lost in the post for over 20 years.

The letter, which was written by the five friends ahead of Bill Clinton's historic visit to Derry in 1995, is narrated by Clinton before the credits roll for the final time.

Some "Derry Girls" fans were less than impressed with the surprise ending.

One viewer said the cameo was a "jump scare:"

Still thinking about how Derry Girls ended with a modern day timeskip but instead of showing any of the characters it cut to a Chelsea Clinton jump scare. pic.twitter.com/Guuv9pLB7h

Another said they were "shaken" by it:

still fully shaken by the chelsea clinton jump scare at the end of derry girls and much like the irish i'll never forget it!

One person tweeted that there was "no reason" for it.

Another person said the finale may have been the worst since "Game of Thrones."

I thought Game of Thrones had the worst season finale of all time until Derry Girls ended with Chelsea Clinton in present day New York.

Who asked for this? 😭

Back in May, McGee told The Belfast Telegraph that she wrote Clinton's cameo as "a little in-joke" and didn't really think it would ever come to fruition.

However, after talking about it more with director Mike Lennox, the two decided to give it a shot.

“Eventually it was a manager in America, like an actor’s manager, who used to work for the Clintons. And she acted as this middle woman for us," McGee explained.

"And then she rang me one night and said, ‘Chelsea’s in,’ and I was like, ‘Oh my God,’ and I was getting drunk ringing Mike."

McGee said: “When we were young we were so obsessed with her [Clinton]

because we were the same age. We talked about Chelsea coming to Derry like ‘maybe we’ll see her’ because it was amazing to us that this teenage girl was in the middle of all this glamorous stuff and lived in the White House.

“That last bit that was done at the very end with Chelsea, we did that after we’d sort of cut the rest of it.

“We did it so fast, Mike, me, and our producer Brian just flew to New York in a couple of days and filmed that last bit.

"So it still feels like a bit of a dream that we’ve done it.”

After the "Derry Girls" finale aired, Clinton described the filming as "magical."

“It was just a joy," Clinton said. "I had even more fun than I expected to have. I cried when I watched it, even though I knew what was going to happen.”