How brothers Arthur Shields and Barry Fitzgerald went from Dublin to Hollywood. 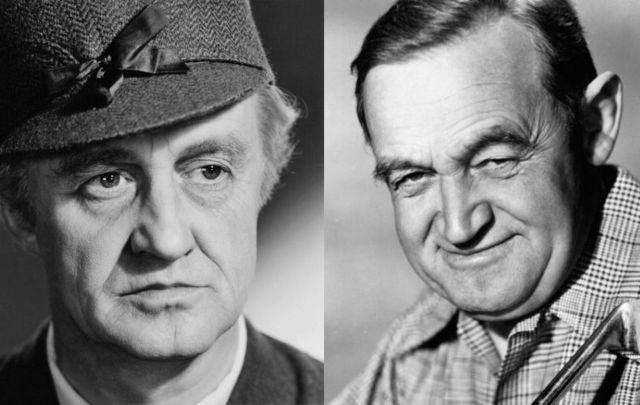 Did you know Arthur Shields and Barry Fitzgerald, who both featured in "The Quiet Man," were brothers? Getty Images

How brothers Arthur Shields and Barry Fitzgerald went from Dublin to Hollywood.

Editor's Note: Dermot McEvoy is the author of "The 13th Apostle: A Novel of a Dublin Family, Michael Collins, and the Irish Uprising." This passage is taken from his book “Irish Miscellany: Everything You Always Wanted to Know About Ireland.” This chapter is entitled “Can’t tell the rebels without a scorecard?”

The motion picture that defines Ireland to many Irish-Americans is John Ford’s “The Quiet Man.” Although made decades ago, many still believe that the sentimental Ireland depicted in the film was the “real” Ireland of the time. It wasn’t—and probably never was. The things about the movie that still resonates are those involved in it, especially its director, Irish-American John Ford, and two of its scene-stealing stars—Barry Fitzgerald and Arthur Shields.

Even today many don’t realize that Barry (real name William Joseph Shields) and Arthur were brothers. Fitzgerald was born in 1888 on Walworth Street in the Portobello section of Dublin. (As a child he played with the younger siblings of James Joyce who he called “a young man with a beard and very clever.”)

He was followed eight years later by his brother, Arthur. (Their house, right next to the Jewish Museum, is today marked by a plaque.) Their father, Adolphus, lists his occupation in the 1901 Census as “Press Reader,” but he was well-known in Dublin as a labor organizer.

One of the big secrets of the family is that, although the brothers made their living in part playing Catholic priests, they were all Church of Ireland. (It should be noted that their mother, Fanny Sophia, who was born in Germany, lists her religion in the 1911 Census as “Agnostic.” Their sister Madeline lists her religion as “Spiritualist”—very outspoken for women in early twentieth-century Catholic Dublin!)

How Arthur Shields ended up fighting in the Easter Rising

Arthur Shields is one of the great stories of twentieth-century Ireland. He became involved early at the Abbey Theatre and worked there as an actor, director, and stage manager. (He was known as “Boss” Shields.) But, still unknown to many, is that he was also a patriot. In 1916 he was a member of the Irish Volunteers and was prepared to fight on Easter Sunday when the orders were countermanded.

On Easter Monday the revolution was on again, and Shields went to the Abbey and retrieved his rifle from under the stage. He went around the corner to Liberty Hall and joined with James Connolly’s Irish Citizen Army. (Connolly, an ardent socialist and master labor organizer, admired his father and congratulated Arthur on his parentage.)

He then marched to the General Post Office in Sackville Street where he fought before evacuating on Friday. He was sent to Stafford Prison in England with another famous rebel—Michael Collins—and from there, they were both sent to the Frongoch prison camp in Wales. Both would return to Dublin by the end of 1916, Collins to terrorize the British and Shields to return to the Abbey stage.

William Shields—known as Will to his friends—worked in the Irish civil service in Dublin Castle, which must have been an interesting place during the War of Independence. After the Easter Rising, he joined his brother at the Abbey and befriended a playwright by the name of Seán O’Casey. While Arthur, tall and lean, was the romantic star of the theatre, Barry Fitzgerald—he took the pseudonym because he was still working in the civil service while moonlighting as an actor—was short and quiet, but had a comic magic that today would be simply translated as “star power.”

Barry’s relationship with O’Casey would soon have Ireland’s foremost playwright writing parts for him, including Captain Boyle in "Juno and the Paycock" and Fluther Good in "The Plough and the Stars". In fact, when that play premiered at the Abbey, riots broke out and little Barry could be seen boxing outraged theatre-goers who attempted to take the stage.

In his wonderful book, "Hollywood Irish", Adrian Frazier makes a very salient point about the two kinds of people—Catholic and Protestant—working at the Abbey. O’Casey, also a Protestant, burst on the scene after the Irish civil war with "The Shadow of the Gunman" and became the most prominent Irish playwright since John Millington Synge (also a Protestant).

Shadow was followed by "Juno and the Paycock" and then by "The Plough and the Stars." Plough proved to be an incendiary play in the Dublin of its day. It questioned much of the nationalistic dogma of the time and brought an earthliness—it contained whores, drinkers, and looters—that upset much of the hierarchy in both government and Church.

It also created a chasm at the Abbey. The Catholics actors were very dubious and nervous about some of O’Casey’s tenets as expressed in Plough, while the two Shields brothers sided with their friend O’Casey. This chasm turned into an open wound when the Abbey, under Yeats and Lady Gregory, rejected O’Casey’s "The Silver Tassie".

The Shields brothers move to America

The Shields brothers and O’Casey started to look for greener pastures. Fitzgerald and O’Casey found them in London, while Shields, for the moment, remained at the Abbey. But the (barely) state-subsidized Abbey was in terrible financial shape and it was decided that the Abbey Players would go on the road to America to keep the theatre afloat.

After the repressive, smothering atmosphere of Catholic Dublin in the new Irish Free State—Arthur Shields famously said that he didn’t want to “say your prayers in Gaelic”—the United States seemed wonderful and invigorating. It also gave the Shields brothers a chance to make real money for the first time, something almost impossible in their itinerant trade back in Dublin. America also contained something called “Hollywood” and the lure would take several years, but finally seduced, first Barry, then Arthur.

Both worked in John Ford’s film version of "The Plough and the Stars". While Arthur continued with the Abbey Players in many capacities, Barry stayed in Hollywood where after appearing in "Bringing Up Baby" with Cary Grant and Katherine Hepburn, he became a familiar face. The brothers would be reunited for Ford’s "How Green Was My Valley" and "The Long Voyage Home". With the advent of World War II, they were stuck in America and continued to work, mostly as reliable character actors.

Fitzgerald’s big break came when he was cast as the ancient Father Fitzgibbons (although he was only 56 at the time) in "Going My Way". To put it mildly, he stole the picture from Bing Crosby and was nominated for two Academy Awards, as Best Supporting Actor (which he won) and Best Actor (which Crosby won). 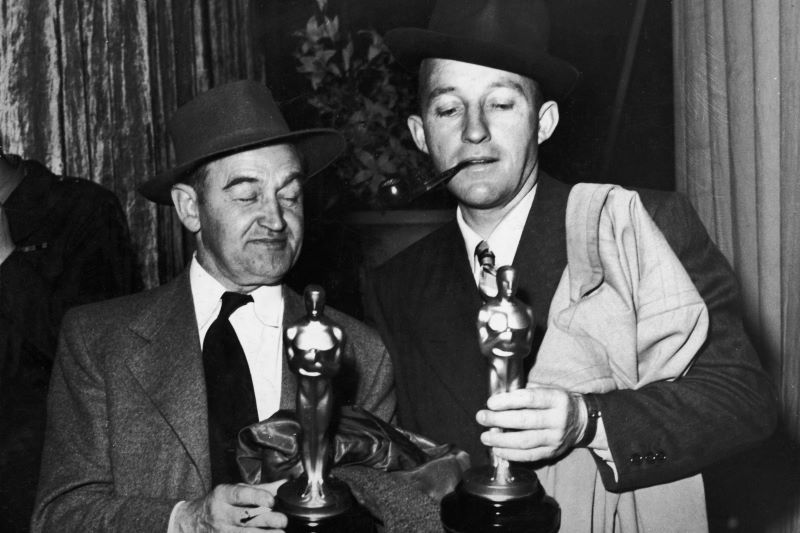 Barry Fitzgerald and Bing Crosby with their Oscars on March 15, 1945. (Getty Images)

(It’s interesting to note the disparity in salary: Crosby was paid $150,000, while Fitzgerald only pulled down $8,750.) Fitzgerald’s dual nominations forced the Academy to change the rules in that no one actor could be nominated in two categories for the same role.

The Oscar made Fitzgerald a star and he went on to receive top billing in movies, including the seminal "Naked City" (1947). In this innovative Mark Hellinger production, filmed on the streets of New York in documentary style, Fitzgerald plays a tough New York homicide detective out to solve the murder of a model. For its time the film is full of forensic science. The movie led to the television series "Naked City" and without it, there would be no "Law and Order" and "CSI". In fact, Jerry Orbach’s "Law and Order" detective Lennie Briscoe owes a lot to Fitzgerald’s Lieutenant Dan Muldoon.

Fitzgerald made a lot of films—some pretty good like "And Then There Were None" and "Union Station" and some awful like "Top o’ the Morning"—between "Going My Way" and "The Quiet Man". Shields meanwhile found steady character work in over thirty films and TV work during the same period. But John Ford’s "The Quiet Man" was to be the apex of both their careers.

"The Quiet Man" remains one of the most beloved films of all time, but it is interesting culturally as well. Fitzgerald plays the roguish matchmaker Michaleen Oge Flynn while Shields plays the kindly Protestant minister, The Reverend Mister Cyril Playfair. Another Abbey player of renown, Eileen Crowe, plays Rev. Playfair’s wife, while an Abbey up-and-comer by the name of Jack MacGowran made his movie debut, playing the fawning little squint, Ignatius Feeney.

"The Quiet Man", ironically, represents a changing-of-the-acting-guard for the works of both Seán O’Casey and Samuel Beckett. O’Casey wrote parts for Fitzgerald, which, in the years ahead, would be played by MacGowran. (MacGowran was on Broadway playing Fluther Good in "The Plough and the Stars" when he passed away from pneumonia in New York in 1973 at the age of 54; his last movie part was in "The Exorcist.")

And in the years ahead MacGowran would become Samuel Beckett’s favorite actor and Beckett would write parts specifically tailored to MacGowran’s talents. “Author and actor are so commonly rooted in spirit,” wrote Mel Gussow in the New York Times in 1970 about MacGowran’s one-man show, Jack MacGowran in the "Works of Samuel Beckett", “that if Beckett were an actor he would be MacGowran, and if MacGowran were a writer he would be Beckett.”

After "The Quiet Man," Fitzgerald’s career tapered down and he made only four more films and a few television appearances. He died in Dublin in 1961. Shields continued to work steadily, especially in television. His last film appearance was with Charlton Heston in "The Pigeon That Took Rome" in 1962. Unsurprisingly, he played a Vatican priest, Monsignor O’Toole. He died in 1970 in California.

*Dermot McEvoy was born in Dublin in 1950 and immigrated to New York City four years later. He is a graduate of Hunter College and has worked in the publishing industry for his whole career. He is the author of "The 13th Apostle: A Novel of a Dublin Family, Michael Collins, and the Irish Uprising," "Terrible Angel," "Our Lady of Greenwich Village," and "The Little Green Book of Irish Wisdom." He lives in Greenwich Village, New York.