The East Durham Irish Festival has always been a place where the Irish gather to start the summer season in the Irish Catskills. 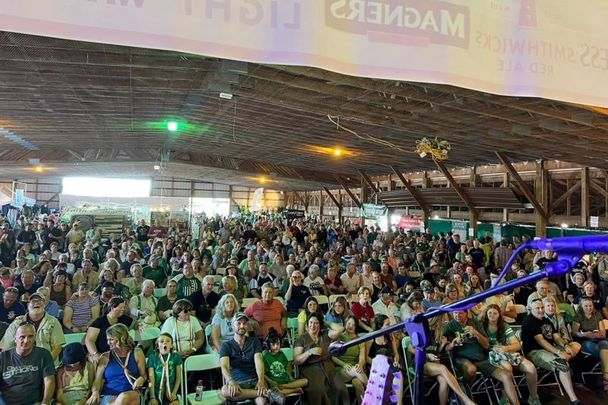 Weather is a fickle finger of fate that hangs over events like outdoor festivals and for resort areas that depend on the festivals to draw crowds to their localities. When you are trying to start up an in-person event after a three-year hiatus due to Covid-19, that becomes another stress point organizers can do without.

Such was a concern for the recent East Durham Irish Festival held over the Memorial Day weekend on May 28 and 29, with some predictions and weather apps suggesting rain in the forecast at a 60-70 percent range.

But whether it was the Luck of the Irish (who know a thing or two about rain) or Mother Nature providing a sympathetic affirmation that the Irish Catskills really deserved a break this year, the 45th annual East Durham Irish Festival went off with just a few drops of rain and augured what is hoped to be a successful year the hamlet that has been luring people to Greene County since well into the last century.

East Durham, and, in particular, the festival grounds of the Michael J. Quill Irish Cultural and Sports Centre located atop Route 145, was spared that deluge that would have decimated any attempt for an event on the ground last year when the festival was a virtual affair online. The non-profit entity founded in 1987 took over hosting the festival back then, but for the first time decided to outsource it this year, and the popular entertainer and entrepreneur Andy Cooney from Long Island along with East Durham resident Seamus Balfe stepped up to the plate and the challenge of putting it together from scratch.

The dynamic duo had a wealth of experience in the entertainment side, particularly in Cooney’s case with a 35-year history of performing in the Irish Alps and knowledge of so many musicians who were familiar with the Catskills style of action.

Balfe too, as a recent resident in East Durham from his base at McGrath’s Motel and Pub, threw himself into the huge logistical challenge of getting the festival grounds ready for action after the pandemic took its toll on many levels.

The organizers’ prayers were answered and while rain fell more frequently elsewhere, East Durham’s Saturday forecast was fine for allowing people to wander around the spacious grounds and enjoy the mixed Irish entertainment fare on four stages.

The festival has always been a place where the Irish gather to start the season in the Irish Catskills which provides a welcome reunion after not only the winter but this year after the 26 months that the pandemic held us in check.

The first day of a two-day festival is always important to get off to a good start, and over 2,000 people turned out to enjoy the scheduled entertainment recruited for the weekend. On Sunday, 2,500 passed through the gates of the Quill Centre, the larger crowd taking advantage of a sunnier day and also the Memorial Day holiday.

Kudos go mainly to Cooney and Balfe for tackling the big event on short notice with about four months to revive and stabilize the brand of the festival as a uniquely important Catskills event.

Cooney, in an email to me, acknowledged the significant help given to them by the Quill Centre and its leadership board of president Ken Dudley and treasurer Terry Patterson who entrusted the stewardship of the whole affair to them, and also board member Jeanie Meade Farrell who added her own expertise working with a large number of vendors who are so important to a festival like this.

Of course, local business folks stepped up to provide much-needed assistance to the fledgling festival team and Cooney gratefully acknowledged folks like Donal Gallagher and Kitty Kelly of Guaranteed Irish Shop, Dermot and Colleen Fenlon of McGrath’s, Bernadette Gavin and Brian Palmieri of Gavin’s Irish Country Inn and Nellie’s restaurant and bar, Garrett Doyle of the new Five Furlongs Pub and many others who provided the pride of place that is so important in keeping the tradition alive in East Durham. Sue and Sean Frey and Tom Sutton helped provide the necessary health and safety requirements behind the scenes as well.

The initiative exhibited by Cooney and Balfe as independent promoters with the right skill sets working alongside the tireless efforts of Quill stalwarts Dudley and Patterson are indicative of the valiant efforts around East Durham and the Irish Catskills by so many to foster an environment for Irish culture to thrive away from the hustle and bustle of daily life.

Last year, a Yonkers sports group dedicated to Irish games organized a two-day tournament that brought 300 people into the East Durham hamlet which was very successful. They are making plans again for something similar in September this year.

Corkman Noel Cronin and manager Niall McKenna (Monaghan) have a special challenge match for their under-15 Feile girls football team from New York and Boston. They will engage with a team from Boston managed by Edmund Carr (Donegal).

As both sides are using the match on the Quill Centre sports field to ready themselves for the upcoming Feile tournament in Dublin this summer, it presents a great boost in confidence that the Quill Centre is open to greater usage of its GAA size pitch on its grounds at 2267 Route 145.  Efforts are underway to enhance those facilities with the goal to entice more GAA teams to come up to train and play in the area.

People who may have visited East Durham for the first time over the Memorial Day Weekend this year caught a glimpse of some of the positive waves to wash in the Irish Alps resort area since last year. Kildare businessman Doyle opened the totally revamped Furlong’s on Route 145 property from inside to outside and down along the creek at the back of the property.  Open since last August, it has been developing a huge reputation built on its food service and innovative décor and outdoor possibilities that have drawn people from near and far.

Similarly, the restaurant and pub formerly known as the Saloon has been taken over by Bernadette Gavin Palmieri to operate in a similar vein and provide another welcome food and beverage hostelry under the name of her granny Nellie Gavin.

Changes aplenty in the Irish Alps this year.