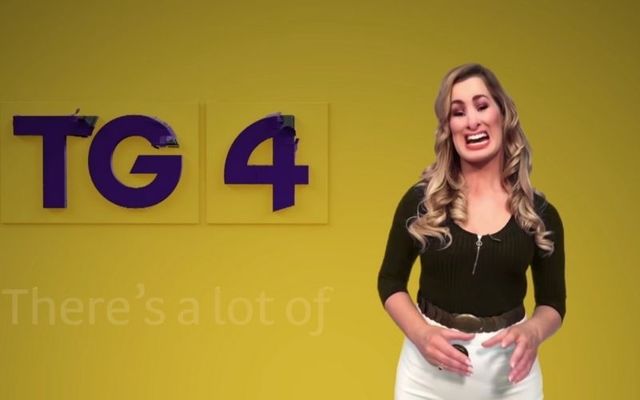 After being struck by lightning on Halloween 2016, TG4 presenter Caitlín Nic Aoidh falls foul of some pesky Snapchat filters with another hilarious Halloween prank. TG4

Irish TV presenter Caitlín Nic Aoidh fell foul to yet another Halloween prank when some interesting-looking Snapchat filters appeared as she made her continuity announcement.

With the Irish-language television station TG4 celebrating its 21st birthday in 2017, the Co Donegal presenter took part in a slightly more playful Halloween prank, as viewers watched her line up the evening’s Halloween schedule through a series of the Snapchat's most popular filters. The dog filter, of course, had to be included.

The station thanked their Snap-Gremlins for making an appearance:

The popular presenter's previous Halloween prank went viral the year before, and viewers were just as amused to see her take on another Halloween prank:

2017 was the third year in a row that TG4 has made their audience laugh with a Halloween prank from Nic Aoidh.  She appeared from their Co. Galway studio presenting the weather via a magic carpet in 2015 before her brush with a storm last year.

The appearance of the Snap-Gremlins will do nothing to put off TG4's social media game, however. Back at the start of 2017, IrishCentral named them as one of the top Irish Snapchat accounts you can follow and we're sure that'll continue, gremlins or no gremlins.

Know somebody who loves a good Halloween prank? Be sure to share this with someone who needs a laugh this Halloween.