The best of Ireland's social commentators and lifestyle gurus you should follow in the New Year. 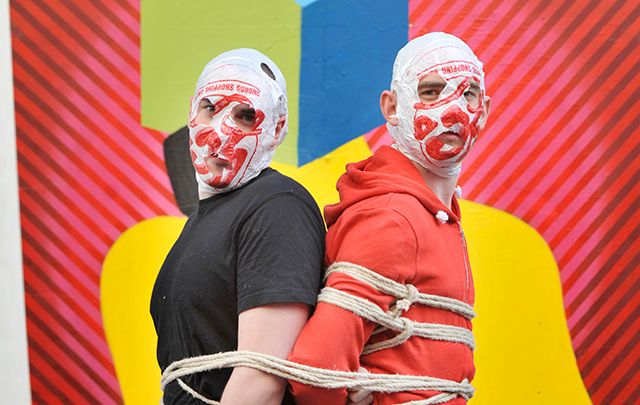 The Rubberbandits pictured outside the Project Arts Centre in Dublin in 2012. RollingNews.ie

We Irish always have a lot to say for ourselves and the advent of the social media revolution has only allowed us many more ways to let everybody know exactly how we feel. While the majority of us are simply blowing a lot of hot air, others have something more insightful to say and you could do worse than to let them into your timeline throughout 2017. We took a look through all of the biggest social influencers the country has to offer and offer up nine of the best from musicians to authors to comedians and beyond.

Delighted to address @bettertogethercampaign this evening in #kilmainham . A night celebrating the immense work voluntary and charity organisations do to make our society a better place

Niall Breslin (commonly known as Bressie) made his name in Ireland as the frontman of The Blizzards and by his appearance as a judge on the Irish version of the TV show The Voice but in recent years, it's his candid advocacy for mental health issues in Ireland that ensured he remained a household name. Speaking openly about his struggles with his own mental health, Breslin addressed the Irish government in a moving speech earlier this year about the lack of adequate services available in the country for those fighting mental health issues.

He currently heads up A Lust for Life a social enterprise and national movement for the well-being of the country while he regularly delivers talks about how Ireland needs to face up to the stigmatism surrounding mental health, even traveling to Boston in 2016 to speak with a group of Irish immigrants.

Hilarious and inspiring and yet somehow still single. 'Tis a mystery (Im @ oneilllo on Twitter. Come hang out)

Winner of the Bord Gáis Energy Irish Book of the Year 2015 for her second novel “Asking for It,” 31-year-old Irish author Louise O’Neill shot to fame with her first novel “Only Ever Yours” in 2014.

Exploring the issues that affect young (and old) Irish women in her books, such as rape culture and modern concepts of beauty, O’Neill has also bravely spoken out about her own battle with an eating disorder.

Not content with being named  "the best YA fiction writer alive today" by The Guardian, O’Neill has become a vocal advocate for women’s rights in Ireland and across the world as the popularity of her books continues to grow.

If you want regular insights into what it’s like to be an intelligent, kick-ass Irish woman in 2017, you can follow O’Neill on Twitter @oneilllo, or on Instagram @oneilllo. She can also be found om Snapchat via oneilllouise

Eventually changed from my pyjamas into something a little nicer ✨ Wearing a new jumpsuit from @clubmonaco (I'm in LOVE) and a pearl-detail shirt! Hope you're all having a lovely day ❤️ #retroflameKerry #ChristmasDay

Erika Fox is a fashion, lifestyle and travel blogger making a massive name for herself in New York City. With almost 69,000 followers on Instagram the Kerry native has become highly influential since making the decision to focus on her blog full time. Last year we recognised Fox as one of the ‘Top 40 Digital Influencers’ in the U.S and she was also named as one of the ‘Top 20 New York Style Bloggers’.

Having worked with brands such as Michael Kors, Vera Wang and Ted Baker and featured in a wide range of national and international publications including Teen Vogue, Seventeen and The Sunday Times STYLE Magazine, her total online following is over 100,000 fans.

One-half of Irish comedy duo The Rubberbandits, Blindboy Boatclub is well known for his comedy that often takes a scathing look at Irish life but just like many others on this list, he has become a champion for the youth of Ireland in his criticism of the way in which he feels the Irish government and Irish society as it stands is failing them.

As well as being quick as a whip, Blindboy, with his strong Limerick accent, expletive-filled language and plastic bag-covered face, may not seem like the most likely of leaders for the next generation of Irish people but he’s one of the best we have and this interview in which he talks about how young Irish men need feminism is one of the best examples.

#latergram from the #nyc shoot in #timessquare #cork

Another young Irish woman reaching the top of her game in New York, Samantha Barry is the Head of Social Media and Senior Director of Strategy with CNN Worldwide. Named by IrishCentral sister publication Irish America as one of the 50 most powerful women in Irish American earlier this year, Barry, originally from Co. Cork, travels all over the globe, training journalists and editors in using social media to optimize the scope and reach of their content. She has even worked as a social media trainer for the U.S. State Department, Internews, and the United States Institute of Peace.

As the UFC fighter continues to take over the world, he documents his training and preparation for his fights all over his social media accounts. He lives a crazy lifestyle and wants us to see every minute of it, from partying with celebs to living it up in Dublin, The Notorious McGregor even has his very own line of emojis for his fans. Even if you’re not a fan of the outspoken two division UFC World Champion, you have to admire how far the Dublin native has climbed.

One of Ireland’s best up and coming comedians, Alison Spittle is sure to have you laughing till you cry on a regular basis. Having appeared at the Vodafone Comedy Fest and the Fringe Fest in Edinburgh and Dublin, Spittle can be seen and heard more and more on irish TV and radio and is sure to have a great 2017.

Take a look at her guide to Mullingar, her own hometown and that on One Directioner Niall Horan to see what we mean.

The brothers at The Happy Pear may break from the stereotypical when it comes to Irish cuisine but their food is delicious and twins David and Stephen Flynn couldn’t be more loveable.

Having originally started out with their small veg shop in Wicklow in 2004, The Happy Pear brand has grown incredibly over 14 years in total, resulting in cafés, a farm, their own product range, best-selling books, and an education network all around their own life philosophy of a healthier and happier world.

A visit to their cafés is a must when in the area and if you’re brave enough you should definitely head along to one of their sunrise swims in the sea in Greystones. If you don’t fancy facing the cold, you can always still follow the craic via their Snapchat account.

While Irish language TV station TG4’s social media accounts are all extremely well run, it’s their Snapchat account that is the real star. Awarded with Best Use of Snapchat at the Irish Social Media Awards this year, the account was crucial in the implementation of the fantastic Halloween prank earlier this year when weather presenter Caitlín Nic Aoidh was “struck by lightning” and was replaced by Caitlín Eile (Other Caitlín). Run bilingually by Nic Aoidh and fellow presenter Micheál Ó Ciaradh, you’ll receive all the backstage gossip and scandal from the best of TG4 shows.

Have we missed your favorite? Let us know who you think is the best Irish person to follow on social media in the comments section, below.