Take a Hike on these top nature trails in Ireland

Nov 17 is Take a Hike Day! There is nothing better than having a hearty breakfast, getting out in the fresh air and walking through the beautiful countryside that surrounds you in Ireland. 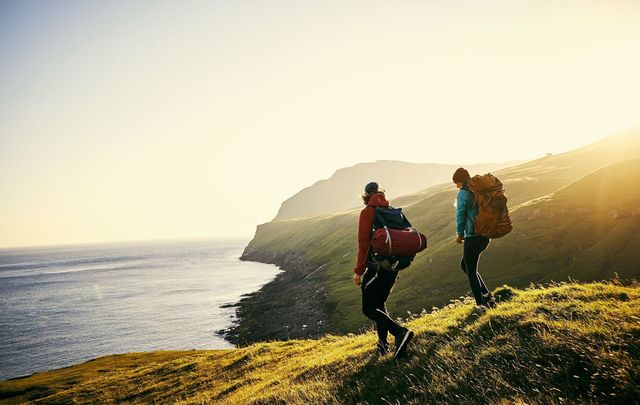 There is nothing better than having hearty breakfast, getting out in the fresh air and walking. Getty

Nov 17 is Take a Hike Day! There is nothing better than having a hearty breakfast, getting out in the fresh air and walking through the beautiful countryside that surrounds you in Ireland.

Take a Hike Day was established by the American Hiking Society to encourage groups of families and friends to get out into the wild and really get a taste of what it means to get away from it all again. What could be better, and more remote, than going for a hike in Ireland?

No matter where your trip to Ireland might take you, whether it’s Dublin City or the Dingle Peninsula, there are long and short walks all around Ireland surrounded by some of the most beautiful scenery in the world (even if we do say so ourselves).

Of course, there are also the day-trippers who just come to visit the wonderful walking trails of Ireland, walk for a couple of miles and then return to reality. Both of these options are available on most of the trails and ‘ways’ in Ireland.

Here is our pick of the top ten trails:

The Kerry Way is one of the most popular walking trails in Ireland. It is often referred to as the Historic Way as it brings the walkers on a journey through history using the old driving paths and coach roads.

Along the way, you will see the stunning Iveragh Peninsula. Also, the old butter roads which in the 18th century used to ship butter from Kenmare to London.

Some flora and fauna of note are the sub-tropical plants along the way. You will spot giant fern and palms right beside rhododendron bushes and yellow irises.

There are many different walking trails in the area but one will take you to Derrynane House the home of Daniel O’Connell, the Great Liberator. A short walk from this house is a beach which looks as though it should be in the Caribbean. Paradise.

This trail is technically Kerry Way’s next-door neighbor but it is a much quieter holiday spot that offers equally beautiful vistas and walks. The entire walk stretches over 120 miles but again you can pick and choose which trails you want to follow.

Along the trail you will find yourself hiking through low rounded hills, walking old bog roads or
exploring abandoned copper mines. But don't worry though because 38% of the trail is covered on country roads. Also, the rocky coastline is very dramatic and perfect for a walking holiday.

This is a pretty short trail (49 miles) which starts at Oughterard and stretches as far as Westport in County Mayo. This area of Ireland has to most fine scenery and quiet countryside in the country.
Connemara means "The Conmaicne Tribe of the Sea". The area stretches from Galway Bay up to Killary Harbor and is bound in on the east by Lough Corrib and Lough Mask.

Along the way, you will see shimmering quartz peaks over bogs and small loughs but beware the average rainfall is 1,700 mm. Just 30% of this walk is by road.

This one might not be for the faint of heart. It stretches over 112 miles and was one of the first national walking routes. The trail follows minor country roads and beaches.

The most dramatic part of the hike comes with a 1,200 feet descent crossing the shoulder of Brandon Mountain between Ballydavid and Cloghane. The walk skirts the mountains of Slieve Mish which form a spine of 40 miles jutting out into the Atlantic Ocean.

The peninsula is littered with remains from the early Christian period, oratories, beehive huts, megalithic tombstones, monastic enclosures, high crosses, to name a few. Beautiful white sandy beaches, a temperate Gulf Stream climate and the profusion of strong colors in the flora – montbretia, fuchsia, purple loosestrife to name a few. A truly amazing spot and 40% of this walk can be made by road.

The Sheeps Head Way starts in Bantry and takes you to the tip of the peninsula at Sheeps Head. The whole trail is 55 miles.

Cork is a spectacularly beautiful place and therefore much visited by tourists and Irish people alike. However, this area is the least visited part of Cork which makes it truly idyllic.

Along the walk, there are a couple of climbs but it is primarily a ridge and shoreline route. The terrain varies widely, making the walk a moderate rating.

The Wicklow Way stretches along 83 miles through the Wicklow mountains right up to the suburbs of Dublin City. Although some of the best walking trails are in the south-west of Ireland the Wicklow Way is a great way to get a taste of Ireland's beautiful countryside if you're staying in the city.

The central section of the trail is covered by the Wicklow Mountains National Park - its headquarters are in Glendalough and worth a visit. The route follows on occasion the Military Road, constructed by the British in the early 19th century to gain access to the lower regions of the county and the Irish rebels hiding within.

Wicklow is known as the 'Garden of Ireland' and its lush valleys and spectacular mountains will not disappoint. About 20% of this trail is on tarred roads.

This is a short trail of just 22 miles. However, it is not for the faint-hearted either. The Antrim Hills are blessed with heather-laden ground and tussocky grasses and the walk will also bring you off-road through fields where your only spectators are lazily grazing sheep and cows.

Along the way you'll be blown away by the Antrim coastline, the Giant's Causeway, a vast seabird colony at Rathlin Island and Dunluce Castle ruins. The trail begins at Glenarm Village and ends at Slemish.

The Glen of Aherlow, County Tipperary

Cashel #aherlow The Glen of Aherlow is a picturesque valley... http://t.co/XClOYDT1cT pic.twitter.com/HvWGsAJerU

This trail is tucked away between the Galtee Mountains and the Slievenamuck Hills. The walk offers everything from low-lying strolls along verdant river banks to high-level hikes through the Galtees.

There are varies trails at various lengths which can last from half-hour walks to four-hour hikes.

If you want a bit of a challenge while on this trail visit Lough Curra and Lake Muskry in the Galtees. The view is superb. From there you can see corrie lakes, wooded foothills, mountain streams, and open moorland.

The best way to describe this inland trail is rural and unspoiled. It travels through the Slieve Bloom Mountains. Along the way, you will be close to nature hearing nothing but the great collection of birds and the wind in the trees.

The circular trail stretches for 33 miles along the midland plains and also up into the environmentally protected areas in the hills.

At Arderin, the highest point in these hills, you are rewarded with a spellbinding panoramic view. In fact, it’s said that on a clear day, you can see the highest points in all four Irish provinces: Lugnaquilla in Leinster, Mweelrea in Connaught, Carrauntoohil in Munster and Slieve Donard in Ulster.

The Burren is 310 square miles of silvery limestone-layered fields that stretch from Galway, across Clare, and to the Atlantic Ocean.

In this unusual landscape, the rivers run underground through a honeycomb of caves carved by nature through soft limestone, where year-round pastures flourish at rocky heights and where Arctic, Alpine, and Mediterranean plants grow side by side as strange flowerbed fellows in secret stone pockets and rocky wrinkles.

This region offers numerous scenic shorter looped walks as well as long-distance routes for those seeking a challenge.

Where is your favorite place to hike/walk in Ireland? Let us know in the comments section below.

Read more: Dublin mountain walk named among 1001 to experience before you die.