Beginning January 16, all people (with some exceptions) arriving into the Republic of Ireland must produce a negative PCR test that was conducted 72 hours prior. 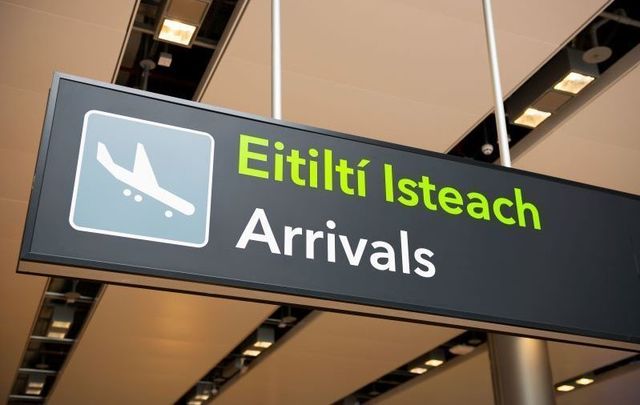 Passengers will be required to produce evidence of a negative PCR test to Immigration Officers on arrival at points of entry into Ireland. Getty Images

Failure to produce a negative PCR test upon arrival into the Republic of Ireland from January 16 could result in prosecution punishable by a fine or imprisonment.

The Irish Government has confirmed that beginning this Saturday, January 16, all people arriving into the Republic of Ireland must produce a negative / "not detected" pre-departure PCR test.

The Irish Government has announced the extension of the requirement for a pre-departure negative/not detected PCR tests to passenger arrivals from ALL countries from Saturday 16 January 2021. The test must be taken within 72 hours prior to arrival

The negative PCR test comes in addition to the current "traffic light" system in effect for the European Union, which dictates how long a person who arrives in the Republic of Ireland needs to quarantine or restrict their movements for.

On January 13, new information was shared on the Irish Government’s page for COVID travel information which reads: “Effective from 16 January 2021, all passengers arriving into Ireland (except those arriving from Northern Ireland) are required to have a negative/‘not detected’ result from a pre-departure COVID-19 PCR test carried out no more than 72 hours prior to arrival in Ireland.

“Passengers will be asked to present evidence of their negative/‘not detected’ result before boarding their airplane or ferry, and will be be required to produce this evidence to Immigration Officers on arrival at points of entry to the State.

“Passengers who arrive in an Irish Airport or Sea Port without evidence of a negative/‘not detected’ test result commit an offence and may be subject to prosecution, punishable by a fine not exceeding €2,500 or imprisonment for a term not exceeding 6 months or both.

“International Transport Workers, including workers in aviation, maritime and road haulage sectors are exempt from this requirement where they are travelling in the course of performing their duties.

“Children aged 6 and under are also exempt from the testing requirement, although they are advised to restrict movements for 14 days.

“Passengers who arrive in Ireland solely for the purpose of travelling onwards to another state and do not leave the airport are also not required to provide evidence of a test.

“If a citizen has a genuine humanitarian emergency requiring urgent travel, they should contact the nearest Embassy or Consulate immediately for advice and consular assistance before commencing their journey.”

A statement from Ireland’s Department of Foreign Affairs on January 13 added: “Arrivals from Great Britain and South Africa will continue to require a negative/not detected PCR test AND must continue to isolate for 14 days, even if they take a second test after arrival.

“Arrivals from red and grey list countries (as defined by the EU traffic light system), and all other locations outside of Europe, must continue to restrict their movements for 14 days. However, this may be lifted on receipt of a negative/not detected result of a second PCR test taken no less than 5 days after arrival.

“Arrivals from green and orange countries (as defined by the EU traffic light system) will not be required to restrict their movements on arrival but must adhere to the local public health guidance.

“Checks will be made by the Border Management Unit at Dublin Airport and by An Garda Síochána at other points of entry."

The European Centre for Disease Prevention and Control (ECDC) updates which countries fall into which categorization as part of the traffic light system each week. The Republic of Ireland is current a "red" country.

People arriving in Ireland will still be required to complete a Passenger Locator Form, which is available online. Failure to complete the form could result in the issuing of penalties, including a fine of up to €2,500 or imprisonment for up to 6 months.

The Republic of Ireland is currently in the midst of a lockdown under "full-scale Level 5 measures," which prevents non-essential travel further than 2km from your home.

If you are planning on traveling to the Republic of Ireland, you are urged to stay up-to-date with the Irish government’s travel advice and restrictions here.