A new strain has been identified in London and area of south-east England. 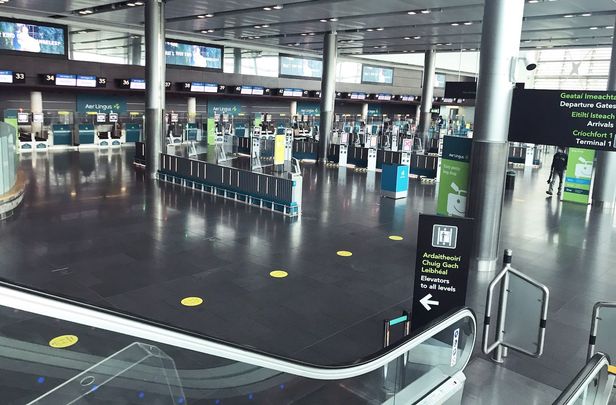 An unusually quiet Dublin Airport as flights from Britain are suspended. Rolling News

The Irish Government has imposed a 48-hour ban on flights from Britain over fears of the spread of a new strain of COVID-19 in areas of the United Kingdom.

Ferries crossing the Irish Sea will also be limited to freight travel under the temporary travel ban, which was agreed by the three coalition party leaders on Sunday.

Taoiseach Micheál Martin, Tanáiste Leo Varadkar, and Green Party Leader Eamon Ryan said in a statement that no one should fly to Ireland from Britain at present.

"In the interests of public health, people in Britain, regardless of nationality, should not travel to Ireland, by air or sea," the coalition leaders said on Sunday.

The move was announced in response to the spread of a new strain of the coronavirus in London and areas of south-east England, which has forced the British Government to introduce severe restrictions in the area over Christmas.

The ban, which is in place on Monday and Tuesday this week, will be reviewed by the Irish Cabinet on Tuesday.

The Government said in a statement that it will be working with authorities in Northern Ireland while the ban is in effect.

Announcing the ban on Sunday night, Minister for Transport Eamon Ryan said that the Irish Government needed to ban travel from Britain due to the new strain's high transmission rate.

"We have to do this because the UK Government themselves has put in place very strict restrictions on movements," Ryan told RTÉ News on Sunday night.

"This new strain of coronavirus, which they have identified, seems to have a much higher transmission rate."

Ryan said that there was no guarantee that the ban would be lifted after 48 hours.

"It's not as if after 48 hours there will be a loosening but it's right to do it on a phased, test basis to restrict traffic now on a precautionary principle and then review it in 48 hours' time," he said.

The Government is taking steps to repatriate Irish people who were on short trips to the UK before Christmas in addition to passengers from other countries who were travelling home to Ireland via Britain.

In reaction to the ban, Aer Lingus and Ryanair have both offered refunds or flight changes for any passengers who were set to travel to Ireland from Britain over the next 48 hours.

Aer Lingus will not operate any flights from Britain to Ireland over the next two days, while Ryanair will operate a limited number of flights to accommodate passengers who need to travel for essential reasons.

Meanwhile, several other European countries have also banned travel from the UK, including France, the Netherlands, Germany, and Italy.

France, for instance, suspended all travel links from Britain, including freight lorries, for 48 hours from midnight on Sunday, while Italy is banning all flights from the UK until January 6 after a case of the UK variant was detected in Italy.