The best places to visit in Oak-Leaf County, filled with history and great natural beauty. 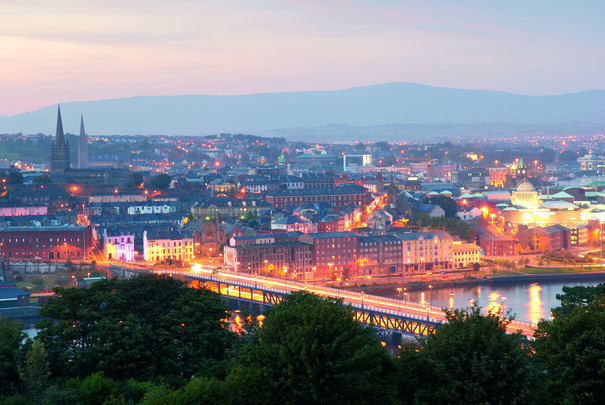 Home to possibly the oldest Irish settlement, chocked-full of natural beauty, County Derry is often overlooked but not to be missed.

One of the six counties of Northern Ireland and part of the province of Ulster, Co. Derry is located along the northwest shore of Lough Neagh.

Named Derry from the Irish “Doire” meaning an “oak-grove” or “oak-wood”, the county is home to perhaps one of the oldest recorded settlements in Ireland, located near Mountsandel, while Derry City is one of the best examples of a walled city to be found anywhere in the world.

Between its underappreciated natural beauty and its sites of importance to ancient and modern Irish history, Co. Derry is not one to be forgotten on any trip around Ireland.

Here are the top five tourist attractions the county has to offer:

The second-largest city in Northern Ireland and the fourth largest city in the whole island of Ireland, Derry is a 17th-century, walled city first founded by Saint Colmcille that was home to some of the most significant events of The Troubles. As such, almost everything about this still relatively compact and small city has a story to offer, be it history old or new.

Derry remains as the only walled city in Ireland and is regarded as one of the best examples of a walled city throughout all of Europe, standing magnificently as the largest monument in State care.

Originally built between 1613 and 1619 by The Honourable The Irish Society as a defense for early 17th-century settlers from England and Scotland, the walls still stand completely intact around a mile-long circumference of the old town. To this day, Derry is one of the few cities in Europe to never see its fortifications breached.

From the walls, you can peer over the original Renaissance-style street plan of the old town of Derry as well as view the largest collection of cannons in Europe whose complete originals are still known.

Stroll along the walls yourself or take one of the walking city tours that will bring you through the history of the Bogside, the Peoples Gallery (Murals) the Bloody Sunday story, the history of the Apprentice Boys, and the marching season traditions.

Last year voted as Best Blue Flag Beach in the UK by holidaylettings.co.uk, the beautiful golden sands and ancients sand dunes of Portstewart Strand are a year-long favorite beach destination, whether you’re looking for a wintery walk or for a lazy day sunbathing in an area of immense natural beauty.

Stretching between the town of Portstewart and Barmouth Wildlife Reserve, the seaside offers activities such as surfing, swimming, and horse riding, as well as scenic walks along marked nature trails.

The nearby wildlife reserve in Barmouth offers nature lovers the chance to view migrant waterfowl, waders and nesting birds throughout the year.

One of Ireland’s most famed poets Seamus Heaney was born in Castledawson. Co. Derry, on April 13, 1939, moving to nearby Bellaghy as a boy. He remained in the country throughout his school life, attending Anahorish Primary School and winning a scholarship to St. Columb's College where he attended high school. Heaney was at St. Columb’s when he learned that his four-year-old brother was killed in a road accident, a family tragedy that inspired his famous poems  "Mid-Term Break" and "The Blackbird of Glanmore".

Named by The Guardian as “one of the top ten outdoor activities in Ireland”, tours are now available throughout the south Derry region Heaney once called home, exploring the people, places, and countryside that inspired Ireland's greatest poet. Taking in Heaney’s birthplace at Mossbawn, tours continue through places synonymous with the Nobel Prize Laureate, including the villages of Castledawson, Bellaghy, and Toome, as well as a visit to The Turf Man, a life-size representation of Heaney's most famous poem “Digging”.

Dramatically located on the edge of a 120ft cliff, Mussenden Temple is already one of the most photographed tourist locations in Ireland.

Originally built as a summer library on the estate of Frederick Augustus Hervey, Bishop of Derry and Earl of Bristol, we can’t think of a more stunning location to settle down for an afternoon of reading than this Northern Ireland cliff face, offering spectacular views westwards over Downhill Strand towards Magilligan Point and County Donegal.

The temple is located in the beautiful surroundings of Downhill Demesne near Castlerock where the personality of the flamboyant creator Hervey can be explored amongst spectacular cliff top walks and sheltered garden paths, while children can use tracker packs, including binoculars, compass and bird identification cards, to explore the wildlife.

The most famous and controversial of the Earl’s creations, the temple, built in 1785, is named after his niece Frideswide Bruce (who married a man named Mussenden) and was designed as a retreat for her when she would visit. At the time of its creation, however, rumors ran rife that the relationship between uncle and niece was far from appropriate and although only based on speculation, the rumor stuck, and is said to have fatefully affected the health of Frideswide, possibly contributing to her early death.

Also located within Downhill Demesne is Hezlett House, a beautiful 17th-century thatched cottage, as well as Downhill House, the once grand Italian-inspired home that was unfortunately ravaged by a fire.

The Museum of Free Derry opened in 2007, is the signature project of the Bloody Sunday Trust, an organization focused on telling the story of Derry during The Northern Ireland Troubles, especially the story of significant events between the years 1968 and 1972 which included the civil rights era, Battle of the Bogside, Internment, and Operation Motorman.

As well as concentrating on the story of how the largely working-class community rose against the years of oppression they had endured, the museum focuses in particular on the events of Bloody Sunday, showing the event in the context of an international struggle for freedom and equality for all.

Situated in the heart of the area where these events took place--a once-derelict housing block in Glenfada Park, in the middle of what was the Bloody Sunday killing zone--the Museum of Free Derry strives to remember this local history and the role Derry played in the ground-breaking civil rights movement that swept through Northern Ireland in the late 1960s.