All the basics and some fun facts about County Donegal. 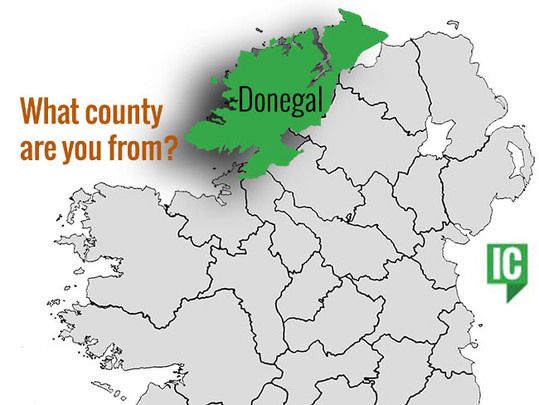 County Donegal is a part of province of Ulster in Ireland. It is named after the town of Donegal. Donegal people maintain a distinct cultural and friendly identity which is easily spotted worldwide.

The county is the most mountainous in Ulster consisting chiefly of two ranges of low mountains – the Derryveagh Mountains in the north and the Bluestack Mountains in the south. Mount Errigal is the highest peak.

Donegal has a deeply indented coastline forming natural sea loughs, of which both Lough Swilly and Lough Foyle are the most notable. The Slieve League Cliffs are the sixth-highest sea cliffs in Europe, while Malin Head is the most northerly point on the island of Ireland. Until the early 1600s, Co Donegal was known as the ‘Capital’ of Tir Chonaill, which was in essence a Gaelic Kingdom controlled by the O’Donnell Clan.

Donegal Sits at the mouth of the river Eske and Donegal Bay, which is overshadowed by the Blue Stack Mountains. The center of the town, known as The Diamond, is a hub for music, poetic and cultural gatherings in the area.

There are many sandy beaches, such as Murvagh Beach, along the Donegal coast. Rossnowlagh and other beaches can boast of excellent surfing conditions. Donegal town is also used as a base for hill-walking in the nearby Bluestack Mountains.

The Inisowen Peninsula has its very own Inishowen 100 (Voted one of Ireland’s Top Ten Scenic Drives – Irish Independent 2010), which allows you to get around the Inishowen area in Donegal without missing anything important. The Wildfowl Reserve can be entered either through Burt or Inch Island in Donegal. The Wildfowl reserve offers an internationally significant destination and staging ground for migrating birds from three continents.

Inch Island is situated on the southwest corner of Inishowen, Donegal. While the name of the place is Inch Island, it is in fact attached to the mainland by a wide causeway. Inch Island is well known for its excellent bird-watching, Birds such as the whopper swans appear quite regularly and there are plenty of picnic benches to stop off for a spot of lunch.

Donegal is also well known for the beautiful Lough Swilly Marina which holds over 400 boats and yachts of varying sizes. Situated beside Lisfannon Beach it’s a perfect place for taking in the sunrise and watching the boats come in for the evening on a beautiful Donegal summer's evening. When you come round the corner of Fahan and entering Lisfannon you will become mesmerized with the panoramic view of Lough Swilly.

Check out some stunning images of County Donegal