Boat-life on the magnificent and mystical River Shannon

"We cruised cautiously into the mist, real sailors now. Like Jason and the Argonauts, we were adventurers, traveling across the timeless waters." 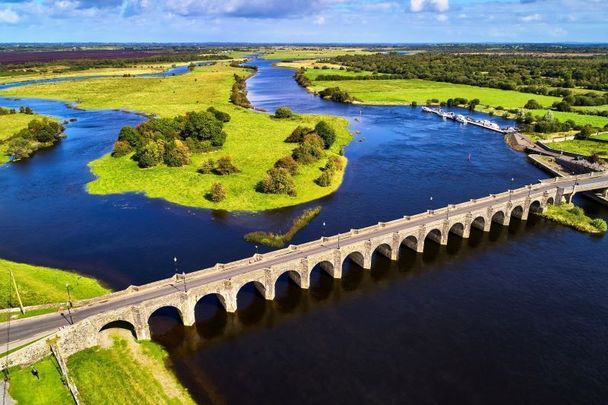 An aerial view of Shannonbridge on the River Shannon. Getty

One of the best ways to see real Ireland is by cruising along the River Shannon, the longest river and a defining geographic feature.

Geography was my favorite subject in school and I remember relishing the task of drawing rivers on a blank map of Ireland. The Shannon was always first on the page, it’s long line headed from the estuary at Limerick up to Leitrim in the North. Three bulges signified each of the three big lakes embedded in the river, Lough Derg, Lough Rea and Lough Allen. The great waterway practically cleaved the country in two and there was little room for the other rivers once I had completed the Shannon. These early lessons laid the foundations for a lifelong fascination for this magnificent river.

The Shannon is the largest, longest and most important river in Ireland. It defines our island like no other feature; many Irish signify their place in the world as either east or west of the Shannon. It is often termed Ireland’s fifth province as much of the river, its floodplains and hinterlands, are hidden from major roads.

I have heard it said that the best way to see the Shannon is to be on the Shannon. And so it was with great excitement that I joined a group of friends for several days cruising on the mighty river. This was a new experience for me. As we set out from the small harbour at Portumna, located just above Lough Derg, I was delighted at the prospect of fulfilling a dream that began so many years ago in an inner-city classroom. 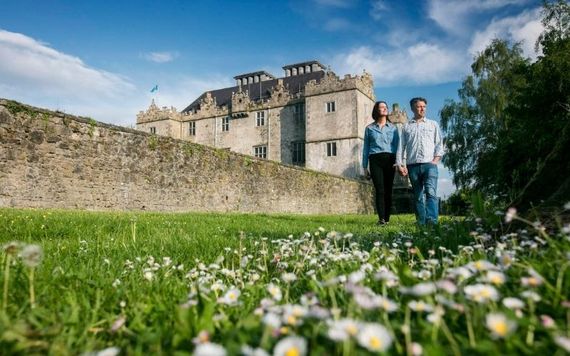 Portumna Castle on the River Shannon.

We were three couples and the big cruiser was our means of travel and our home for the duration. It was self-drive so we could go where we wanted. Part of the thrill was literally "learning the ropes" as the helpful assistant showed us how to maneuver the big boat and tie up on shore. With instructions complete, we set off upriver to begin the experience.

Our first few hours on the waterway were wonderful; the boat pushed along by the gentle purr of the engine and the broad river opened before us with a moving panorama of low fields, rushes, trees and wetland wildlife. The sunlight glistened on the water as we sat on deck and our minds quietened to the spell of the river. The Shannon is mystical as well as magnificent and its spirit envelops those who journey within.

The small harbor at Banagher provided an easy berth as we tied up with the fading light. There’s no finer way to dine than in the company of good friends on the top deck of a Shannon boat. Later, we settled back to be entertained by the ceaseless chattering of busy ducks as they grouped and regrouped along the dark shore. In the end everything goes quiet, we fall asleep and dream.

The next day our plan was to sail up to the monastic settlements at Clonmacnoise. It is easy to see how the river was an important source of navigation in ancient times. Up until the 1700s, most of the country was covered in forests and the best way to journey was by boat. Many settlements grew up on the banks of the river and along its lake shores and islands. 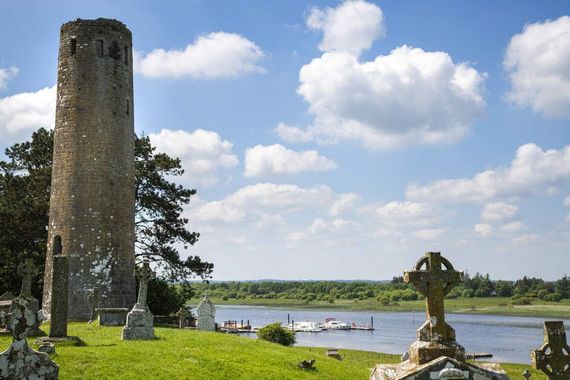 A view of the River Shannon from Clonmacnoise.

As we cruised upstream we were conscious of the chieftains, monks, traders and Vikings who used this same passage to achieve their goals. At times, when the trees closed in and the river meandered among the callows, there was little to suggest modern life. At one point, a single tree, stripped bare by the winter floods, hosted a flight of Cormorants drying their wings in the sun. Much of the landscape was unchanged since Saint Ciarán founded the small chapel at Clonmacnoise more than fifteen hundred years ago.

The ancient site is located at a broad bend in the river. Its strategic position makes absolute sense when you approach it from water. The Vikings plundered Irish monasteries by sailing up river; clear views from a low hill were a good defense. When the attacks began, the iconic round tower provided a useful refuge for the monks and their precious belongings; however, for this to work they needed to see the enemy coming. 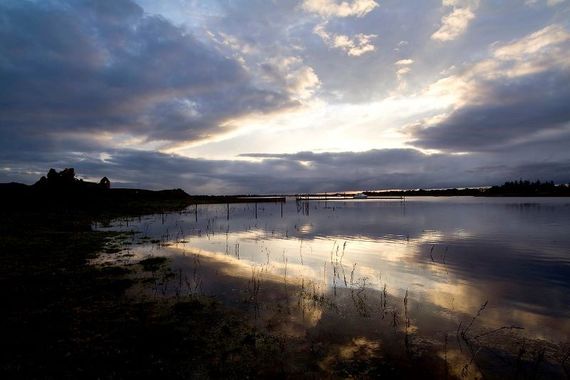 Dramatic skies over Clonmacnoise on the River Shannon.

Ours was a much calmer invasion from the shore, and we made our way up the hill to amble among the crosses, chapels and ruins, it was easy to appreciate the religious and spiritual significance of this place. Looking out at the river below, the western lands stretching to the horizon, you can feel the sense of wonder that attracted people to this sacred place long ago.

Clonmacnoise marked the uppermost point of our journey. With our visit complete, we turned downstream to make our way to Shannonbridge for our next overnight birth. About one-fifth of the entire landmass of Ireland drains into the  Shannon. With each rainy winter, the great river extends its banks and many fields flood for several months. This seasonal uncertainty keeps houses and roads well away from the shore and creates a wonderful wilderness that is quite literally ‘away from it all’. In summer, cattle, horses and donkeys graze along the shore but there are few structures. 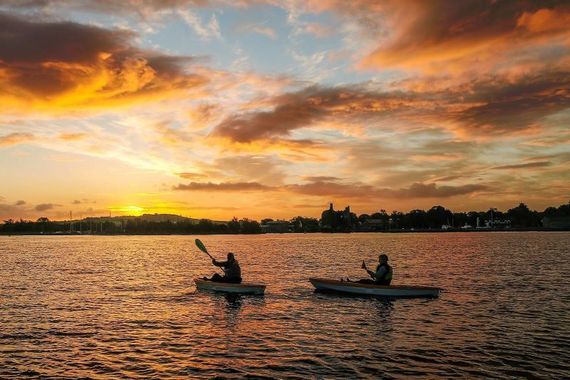 On the third day, the flow of the river took us southwards past Portumna Bridge, which opens like a gate, and on into the expanse of Lough Derg. The lake provides a new sensations. Wide views and distant shores. Gulls foraging in from the sea and swaths of reed beds protected by navigation markers. We kept away, heeding the advice to stick to the middle of the lake.

The quaint village of Terryglass derives its name from the Irish language meaning ‘land of the two streams’. Its small harbor teamed with other cruisers, and fellow boaters offered shore-side advice as our ‘captain’ slowly maneuvered us to a narrow berth. We were true river folk now and felt at ease as we chatted away with our nautical neighbors and exchanged stories of river escapades.

People have been cruising here for years and they still report new delights each season. We had traveled along only a small portion of the river and were blessed with calm weather and fine conditions for cruising. Sometimes that’s the way it is but on other days it rains, the wind blows and the water turns dark and choppy. These changing aspects of the river’s landscape make every cruise an adventure. There is so much more to be explored.

The next morning we snuck away while the rest of the marina was asleep. Our destination across the lake, at the mouth of the Scarriff River estuary, was the tiny harbor at Mountshannon. The village was purpose-built in the 18th century to demonstrate Protestant values. The wide streets and hillside terraces with lake views were all meticulously planned. The village still retains its beautiful elegance. Once again we dined on deck and celebrated our successful voyage. 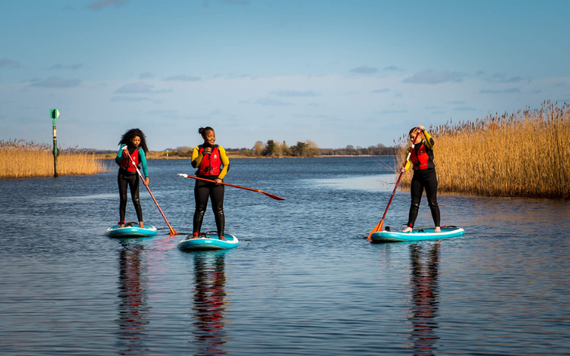 Stand up paddle in Scarriff, in Clare.

There was one final leg the following morning. We had to take the boat back to Portumna. As we set off shortly after sunrise, the river worked its magic once more. This time we were enveloped in fog. It was just possible to see the closest navigation buoys; nothing beyond that. We cruised cautiously into the mist, real sailors now. Like Jason and the Argonauts, we were adventurers, traveling across the timeless waters. Later, as the sun’s heat burned away the mist, the wide majestic Shannon showed itself once more and we sailed safely back to base entirely fulfilled and enriched by our river experience.