Places, stories and a cyclists memories of County Leitrim

As a COVID brings new vacations to us all we explore the quiet roads and perfect staycation spots in County Leitrim. 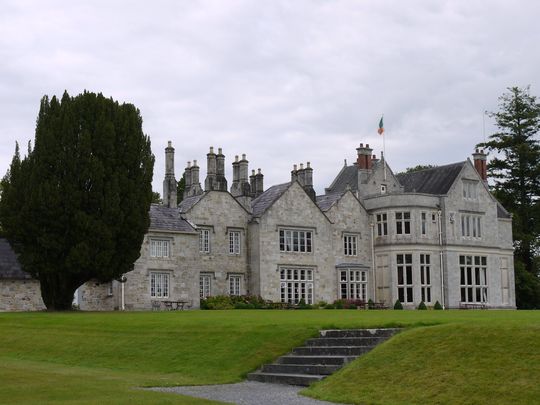 "The journey starts and finishes in the grounds of Lough Rynn Castle, a place that encapsulates the ebb and flow of Ireland’s history." Eoghan O'Kionnain / Flickr

In Leitrim, where I like to cycle, the short dark days of winter bring quiet roads and lonely pathways. Few people venture over the hills and across the bogs. This is a time of windy, wet days and cold nights. A time to gather round, light fires, and tell stories.

Every place in Ireland has a name and a story. You just need to know how to look and listen to the past. Across the land, former peoples have left their mark in words and objects that pattern the countryside.

As the ancients did with the stars in the night sky, we seem to have a natural tendency to make meaning from what we observe. We see shapes and we make a story. We connect the story with our forefathers and a legend is born. Truth and fiction intertwine and human imagination flourishes.

There is no better place to experience this flourishing than the places, townlands, and villages of County Leitrim. Diarmaid and Gráinne slept on this rock. Cú Chulainn passed through this gap. There be a Holy Well, a Mass Rock, a haunted lake, and a tree that is older than time itself. I would go so far as to say, wherever you stand in Leitrim, you’re never far from a good story. 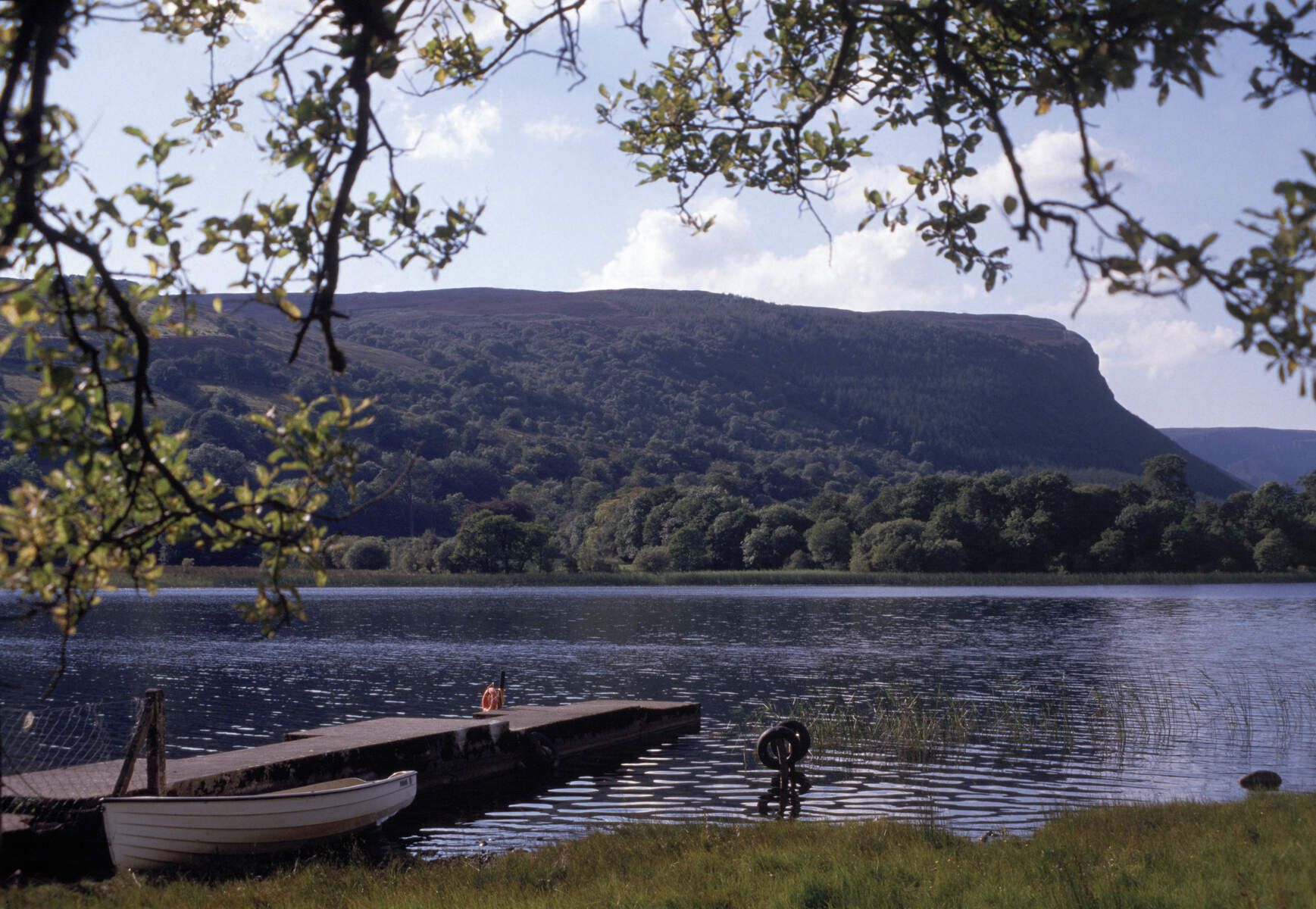 I cycle a long loop around the southern part of the county. The journey starts and finishes in the grounds of Lough Rynn Castle, a place that encapsulates the ebb and flow of Ireland’s history. Now an up-market hotel resort, it was once the home of the notorious Lord Leitrim.

Winter cycles are like journeys to the realm of imagination. Old buildings, ramshackle machinery, and curious stone structures are scattered along the quiet roads. Herein are the memories and secret stories from long ago.

I pass an isolated ruin of a building; a one-person dwelling, long ago abandoned. A fireside story, typical of these parts, comes to mind.

“There was a man once, and he lived on his own near the bog. He had none for company but his dog. Like the man himself, the dog was old and worn out from working the fields. He had plenty to eat and enough turf to keep the fire going. But he was very lonely. So, he would sit alone in the smoky cottage and tell stories to his dog. 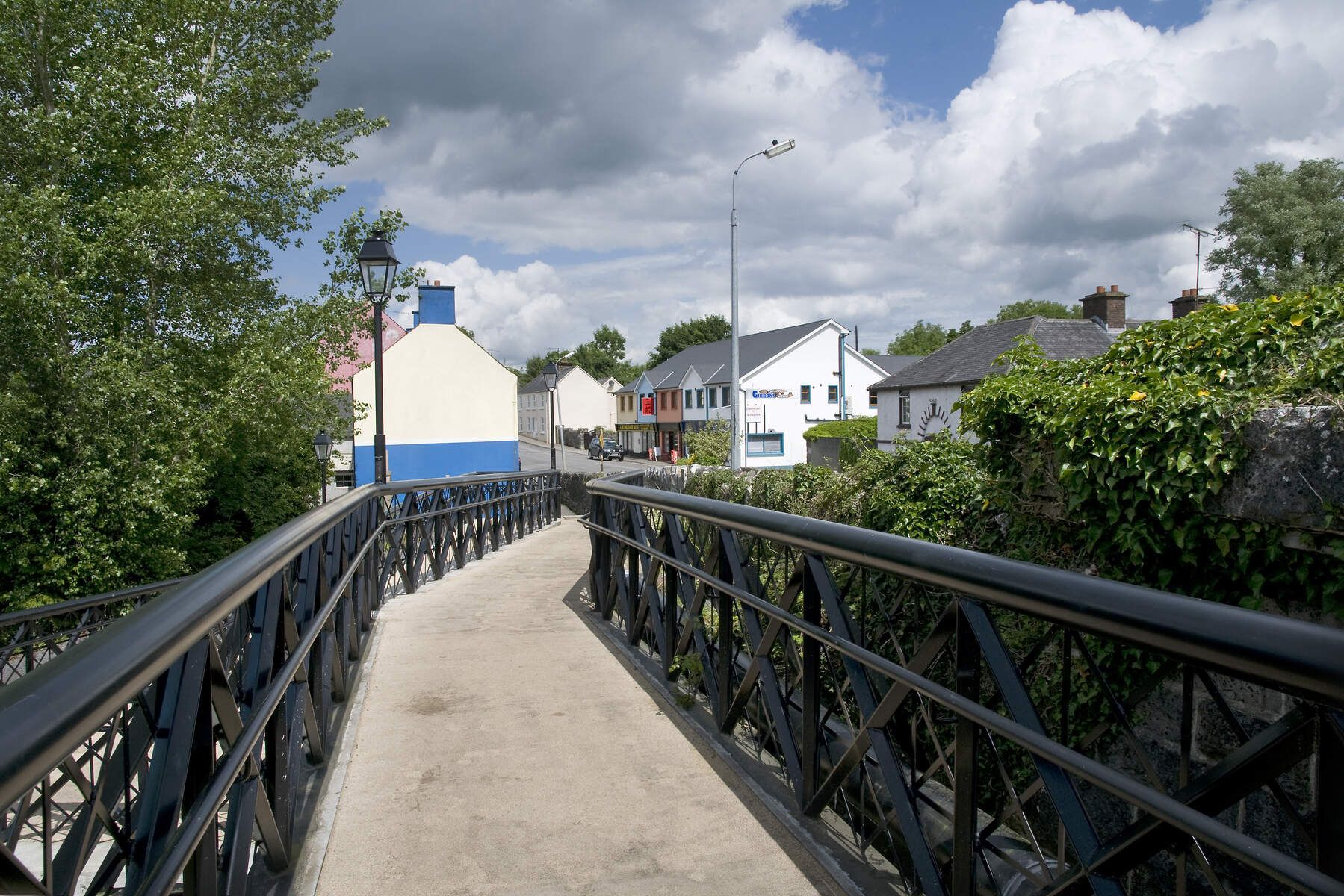 One night a stranger called and asked for shelter. The old man was wary at first but he could see the stranger was in a bad way, ragged from traveling and old like himself. So, they both sat around the fire and the man shared his soup and told his stories to the stranger.

There was another knock at the door. This time there were four more strangers looking to come in. Again, the old man bid them enter and they gathered round to hear his stories.

On into the night, people kept arriving and the man relished the company and told the most wondrous tales.

It was near morning when he slowly realized they had come to take him away. He smiled quietly in his sleep; they took his hand and gently brought him over.

When neighbors found him, they felt sorry he had such a lonely death. Only the dog knew the truth of it.”

Sometimes, you can sense the stories from the shape of the land; a lonely tree, a hill overlooking a lake, shores of reeds and rushes. Ireland is all fields and every one of them has a name.

A remarkable source for stories and place names is the Irish Folklore Commission’s Schools Folklore Collection. In the years 1937-39, a nationwide exercise to gather stories from older people was organized through the schools. Senior pupils, the then 10 to 12-year olds, gathered wisdom from their elders, and the details were transcribed into a marvelous collection of copybooks.

Here is what a local schoolgirl said about the fields around Lough Rynn. “There is a name on every field in Lough Rynn Demesne and some of them are as follows: Hugo’s bottoms, The Druids Hill, The School House Field, The Grove Fields. 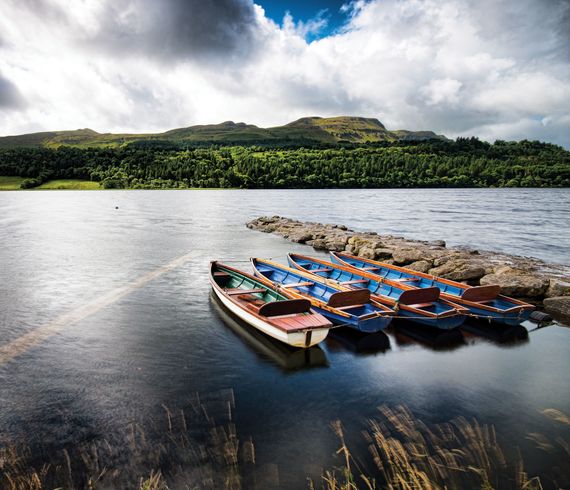 Hugo’s Bottoms are so-called because a man called Hugo Reynolds had a farm of land there…The Druid’s Altar is on top of a big hill called the Druid’s Hill. There are two big flat stones. One of them is lying flat on the ground and the other is standing up straight at the top, and it supposed to be a giant’s grave.”

I was intrigued by this last story about the Druid’s Altar and decided to see if I could find the place. There is only one hill around Lough Rynn and it sits between Rynn lake and Lough Errew. The hill is not very big.

However, I realized the story was being relayed by a child and I guessed this must be the ‘big hill’ of which she spoke.

The place was surrounded by brambles and not easy to get to. However, sure enough on the high ground between the two lakes lie the two great stones, one standing upright and one lying flat – the Druid’s Altar.

Further research revealed the structure is in fact from the Bronze Age, about two thousand years old. A burial site for a local chieftain, long forgotten and now revealed in a child’s copybook from 1939.

The current County Leitrim corresponds roughly with the western part of the ancient Gaelic Kingdom of Breifne. Up until the early 1600s, the ruling families in these parts were the O’Rourkes to the north and Reynolds in the area around Lough Rynn. These names are still common in the area.

There were many wars, raids, and disputes between the clans and, as can be seen from the old castle on the grounds, strategic positioning was a distinct advantage. Rynn is situated between two lakes and so it was the ideal location for Reynold’s stronghold.

In 1621, parts of Leitrim were planted by English settlers, and the local clans, including the Reynolds were driven out.

Subsequently, Lough Rynn was taken over by the Clements family and the title of Earl of Leitrim was granted by the crown. Although his brother and father held the title before him, it is the third Earl of Leitrim, William Sydney Clements who is generally referred to as Lord Leitrim.

He took over the estate in 1839 and became the principal landlord in the area throughout the famine and beyond. He managed his estates with ruthless determination and was quick to evict families from their holdings and showed little sympathy for the suffering that followed.

The Schools Folklore Collection contains many stories about Lord Leitrim, the memories from the old people in the area still raw from the awful times in the 1800s. The following account, from a man who was 80 years old in 1939, is typical. “In those days landlords exerted extraordinary powers over their tenants. Even the most tyrannical king wielded as much power as Lord Leitrim for he was judge, jury, and executioner, throughout his whole estate. Besides being landlord, he was also a magistrate and he used his power as such to dishonor the wife and daughters of his tenants. If a tenant refused to send his daughter to act as a servant in Lord Leitrim’s castle that tenant was evicted and perhaps punished, or fined in the law courts for crimes he never committed.”

On the 2nd of April 1878, Lord Leitrim was assassinated while making a trip to Donegal. The local people rejoiced and bonfires where lit on the hills around Mohill and many poems and songs celebrated the demise of the cruel landlord.

It was on the rise they did behold

Three lifeless on the spot.

And the word went far and near

Lord Leitrim, he was shot.

It was going around by Cratloe Wood

He met his sad downfall.

He was there he met bold Rory

On the Hills of Donegal.

Although Sydney Clements well-deserved his dreadful reputation, there were some good accomplishments on his part. He loved trees and understood landscapes and to this day Lough Rynn House and Gardens have a unique beauty.

His interest in agriculture encouraged improvements in land use, he supported local schools and built solid houses that can still be seen as you cycle around. Places, stories, and memories still found on the roads of County Leitrim, a place where the cycle of life continues.