There’s no place in the world like Dublin on Bloomsday

Every year on June 16, Dublin City is one big party for Bloomsday, the day celebrating James Joyce's "Ulysses." Here's a look at all the events typically hosted across Ireland's capital city. 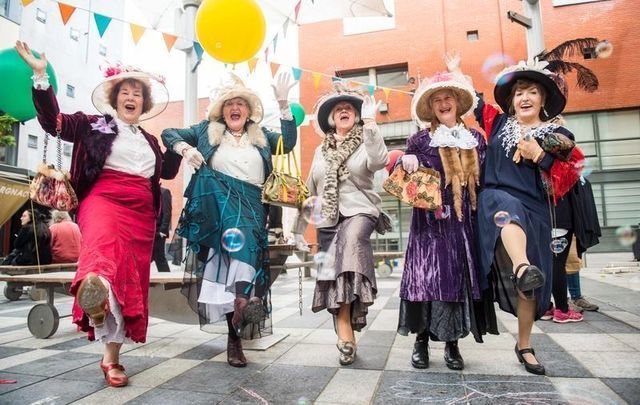 Every year on the 16th of June, Dublin City is one big party. Here’s how to get the most out of it. Ireland's Content Pool

If you can, you should really try to spend Bloomsday, June 16, in Dublin once in your life - you'll never forget it, and you'll never see Dublin like this on any other day.

Editor's Note: The below was written by former IrishCentral editor Sheila Langan after she traveled to Dublin to celebrate Bloomsday in 2015.

It’s 10 in the morning on June 16, 2015, but the second I turn the corner onto North Great Georges Street in Dublin, any clear indicators of exactly which year or decade it disappears.

Ladies and gentlemen – it would feel wrong to describe them any less formally – mill about, dressed in straw boaters, crisp linen suits, Victorian-era skirts and blouses, parasols in hand. Spectators and tourists brandishing iPhones stand taking photographs at the crowd gathering outside the James Joyce Center at number 35.

It’s Bloomsday in Dublin, the day when the worlds of Joyce’s Dublin of 1904 and the Dublin of today collide for one glorious, very often a raucous, celebration. 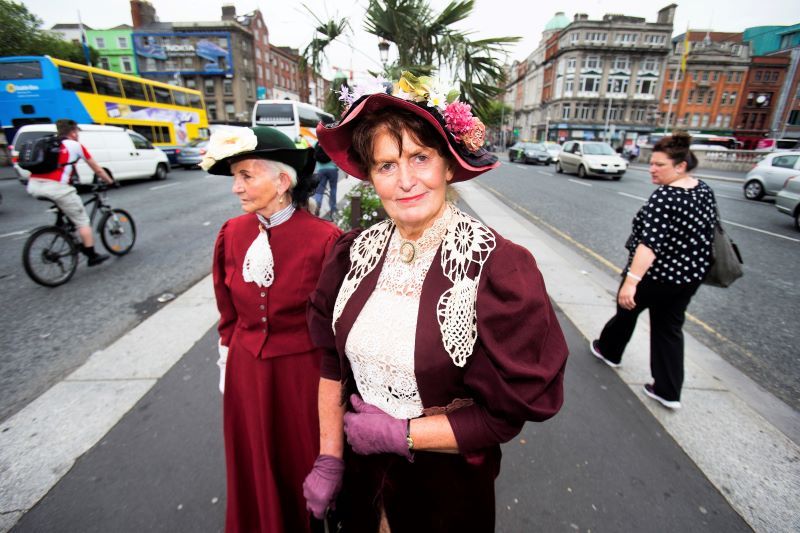 June 16, 2015: Eileen Fennell and Maragaret Toomey from Glasnevin pictured on O Connell Street Bridge Dublin waiting for a lift from a friend to Dalkey as they took part in the Bloomsday celebrations around Dublin. (RollingNews.ie)

How Joyce himself would feel about the day the world, and his home city, in particular, celebrates his novel is a matter of great if somewhat futile debate. The premise of Ulysses – a novel taking place across only one day – was revolutionary at the time. Joyce chose the specific day, June 16, 1904, because it had special meaning for him. It was the date when he first ‘went out' with Nora Barnacle, the woman who would become his wife and his muse.

When Joyce first got word of a Bloomsday celebration – so named for the protagonist of Ulysses, Leopold Bloom – in 1924, he treated it with measured amusement. "There is a group of people who observe what they call Bloom's day – 16 June,” he wrote in a letter on June 24, 1924, to his benefactor, Harriet Shaw Weaver.

It must have been strange knowing that in his home country, where he had not set foot since 1912, where his book was banned and burned, the place from which he considered himself an exile, there were people celebrating June 16 as “Blooms day.”

Thirty years later, the most famously documented Bloomsday excursion was planned and (half) executed by a group of Dublin writers, thinkers and drinkers including Patrick Kavanagh, Brian O’Nolan and John Ryan – half executed because, as this film testifies to, they were too inebriated to continue past Ryan’s pub, The Bailey.

Nonetheless, for Joyce fans – or even just for people who enjoy a good party – Bloomsday is a treasured occasion to talk about “Stately, plump Buck Mulligan” coming down the stairs of the Martello Tower; to eat ‘nutty gizzards, a stuffed roast heart, liver slices fried with crust crumbs, fried hencods’ roes or grilled mutton kidneys’; to buy lemon soap; to feast in a pub on gorgonzola sandwiches and burgundy wine, to sing songs about those lovely seaside girls, and to repeat that famous last line – “Yes, I said, yes I will, yes,” – over and over.

I’d celebrated Bloomsday before – with my seven-person Ulysses seminar in college; at the Ulysses Bar on Stone Street in Manhattan’s financial district; at Symphony Space on the Upper West Side, where Fionnula Flanagan takes the crowd late into the night with her incomparable reading of Molly Bloom’s soliloquy, the final chapter of Ulysses.

But I’d long heard stories, read articles about, and ogled over photos of Bloomsday in Dublin, and, finally, that summer I was fortunate enough to be there as part of a journalists’ tour hosted by Tourism Ireland.

In New York, we have the Fourth of July, we have St. Patrick’s Day, we have New Year’s Eve. But I’d never experienced anything quite like a city rallying in celebration around a novel and its legacy.

In Dublin, the Bloomsday festival spans six fabulous days. In 2015, being there for only three of them, June 14 – 16, still provided ample time to enjoy a whirlwind of Joycean activities. Most of these activities – and many more – are back by popular demand for this year’s Bloomsday Festival, which began on June 4 and runs through to Bloomsday itself, June 16.

It started with a jaunt around the James Joyce Center, housed in a stately Georgian townhouse, which includes an array of permanent exhibitions, from the original door of No. 7 Eccles Street, the house where Leopold Bloom lives in Ulysses, to artifacts from Joyce’s life right up to his incredibly detailed death mask.

Exiting, we were met with a self-proclaimed Bizarre Bloomsday Brunch and Street Party, which filled North Great Georges Street with picnic tables, song, and dance.

The Center also offers a Bloomsday breakfast on the day itself, complete with the aforementioned fried kidneys, other offal and singing seaside girls, as well as guided walking tours, in which a Joyce enthusiast who knows more about Ulysses than likely 90 percent of the people celebrating in Dublin will take you on a tour of the North Side of Dublin, stopping in front of relevant buildings and corners to read aloud passages. 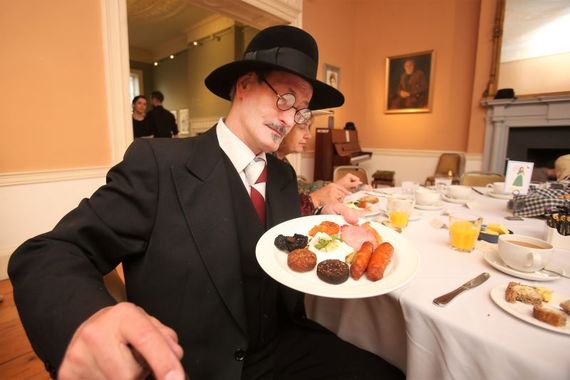 This is perhaps the most surreal thing about Bloomsday in Dublin. It’s been over 110 years since the events of Ulysses took place and were adapted into novel form, and Dublin and Ireland have changed immeasurably since then.

But you can still walk the streets Joyce described, still visit many of the places Leopold Bloom and Stephen Dedalus wandered, as well as the spots Molly Bloom reminisces about as she thinks to herself in bed in the early morning hours.

No Bloomsday experience – or, arguably, any experience in Dublin – would be complete without the award-winning Dublin Literary Pub Crawl, led by actor Colm Quilligan for over a quarter of a century. The tour takes visitors to famously literary pubs in the Dublin City Center – The Duke, O’Neill’s, The Old Stand, and Davy Byrne’s, which itself features in Ulysses (“Nice quiet bar. Nice piece of wood in that counter. Nicely planed. Like the way it curves,” Leopold Bloom describes it.) 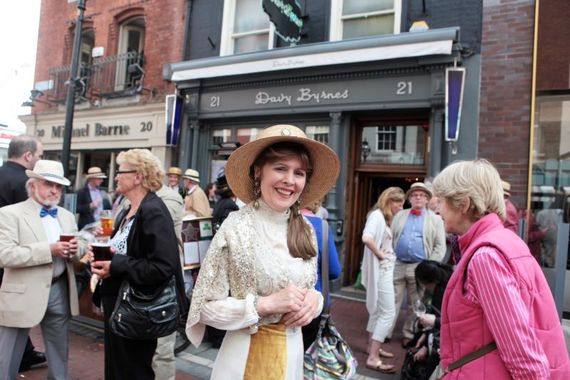 June 16, 2015: Carole Ward om Walkinstown enjoys the festivities of Bloomsday outside Davy Byrne's pub on Duke Street in Dublin and was made famous in James Joyce's novel 'Ulysses.' (RollingNews.ie)

Joyce’s life and words impact the tour, but almost more impactful is the sense you get of his predecessors, contemporaries, and successors, such as Yeats, Wilde, O’Casey, O’Brien, Behan. These same spots – Davy Byrne’s in particular – are packed to the rafters during the day on Bloomsday with patrons in Victorian garb.

Also essential, both for Bloomsday and for any trip to Dublin, is a tour of Glasnevin Cemetery – perhaps one of the most fascinating and historic places in the whole city, due to the vast expanse of lives both ordinary and luminary that rest there eternally.

Glasnevin features prominently in Ulysses – in the sixth chapter Hades, Leopold Bloom, friends, and acquaintances travel via carriage to Glasnevin for the funeral of Paddy Dignam. In addition, real-life figures who impacted Ulysses are buried there, including Joyce’s father, John Stanislaus Joyce.

Joycean tours of the cemetery are available, and on Bloomsday itself the Hades episode is read right there in Glasnevin where it takes place.

Take an excursion to Howth, the quaint, foodie-paradise fishing village on the outskirts of Dublin, and clamber up to Howth Head, the cliff-side trail overlooking the sea. Here, nestled in the flowers and the gorse, is where Molly Bloom recalls Leo proposing to her at the end of her soliloquy.

Lastly, another unmissable seaside venture for Bloomsday is the Martello Tower in Sandycove, where Joyce lived for a short time in real life with Oliver St. John Gogarty, and where the first pages of Ulysses unfold with their stand-ins, Stephen Dedalus and Buck Mulligan.

On Bloomsday, the single spiral staircase that runs between the floors is jammed with various tour groups and revelers attempting to reach the roof, where Joyce aficionados give dramatic readings of various passages with a view of Dublin Bay in the background.

If it’s a warm, sunny day, you’ll likely catch the hilarious juxtaposition of kids in shorts and bikinis leaping into the water as men and women in suits and lace blouses stroll past under parasols. 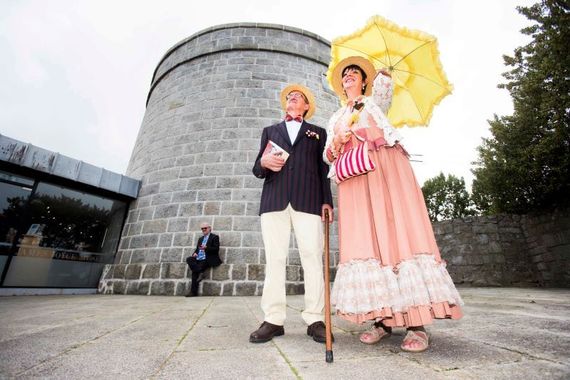 But wherever your day takes you, make sure you end up back in the City Center for Bloomsday night. Whether it’s popping into one of Dublin’s literary pubs, walking along the Liffey towards the James Joyce House on Usher’s Island, the house from Joyce’s short story “The Dead,” where you can book a “Dead” dinner experience, or going to one of the planned panel discussions or the festival after-party, it will be a night to remember.

Have you ever been to Dublin on Bloomsday, June 16? Tell us about it in the comments!