Legendary Irish writer Brendan Behan, responsible for some of the best-known and most wise quotes.

Legendary Irish writer Brendan Behan was a Dubliner through and through, as well as a poet, short story writer, novelist, and playwright.

Born to a Republican family, Behan became a member of the Irish Republican Army’s (IRA) youth organization Fianna Éireann at the age of 14.

There was also a strong emphasis on Irish history and culture in the home, which meant he was steeped in literature and patriotic ballads from a tender age. Behan eventually joined the IRA at 16, which led to his serving time in a borstal youth prison in the United Kingdom and was also imprisoned in the Republic of Ireland.

During his time in prison, he studied and become a fluent Irish speaker, writing his works in both Irish and English. He was released from prison as part of a general amnesty given by the Fianna Fáil government in 1946, Behan moved between homes in Dublin, Kerry, and Connemara and also resided in Paris for a period.

In 1954, Behan's first play “The Quare Fellow” was produced in Dublin. It was well received and the 1956 production of the same play at Joan Littlewood's Theatre Workshop in Stratford, London, gained Behan a wider reputation. 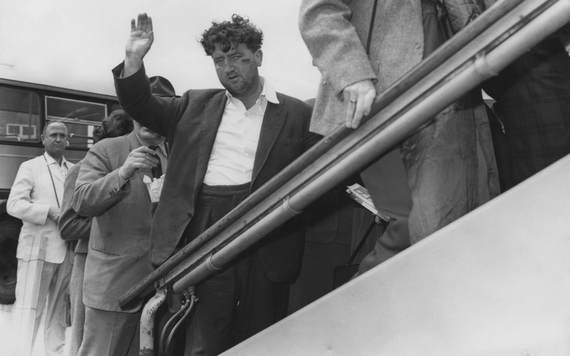 In 1958, Behan's play in the Irish language “An Giall” had its debut at Dublin's Damer Theatre. Later, “ The Hostage”, Behan's English-language adaptation of “An Giall,” had great success internationally. Behan's autobiographical novel, “Borstal Boy,” was published the same year and became a worldwide best-seller.

He married Beatrice Ffrench-Salkeld in 1955.

His reputation also grew due to a famous drunken interview on BBC television, however. Behan was known for his drinking problem, which resulted in him suffering from diabetes, which ultimately resulted in his death on March 20, 1964. He was given an IRA guard of honor which escorted his coffin and it was described by several newspapers as the biggest funeral since those of Michael Collins and Charles Stewart Parnell.

In celebration of the birth of one of Ireland's greatest characters, here are some of Behan's best quotes:

1. “It's not that the Irish are cynical. It's rather that they have a wonderful lack of respect for everything and everybody.”

2. “I am a drinker with writing problems.”

3. “The most important things to do in the world are to get something to eat, something to drink, and somebody to love you.”

4. “There is no such thing as bad publicity except your own obituary.”

6. “Other people have a nationality. The Irish and the Jews have a psychosis.”

7. “I have never seen a situation so dismal that a policeman couldn't make it worse.”

8. “One drink is too many for me and a thousand not enough.”

9. “New York is my Lourdes, where I go for spiritual refreshment ... a place where you're least likely to be bitten by a wild goat.”

10. “What the hell difference does it make, left or right? There were good men lost on both sides.”

12. “If it was raining soup, the Irish would go out with forks.”

13. “Critics are like eunuchs in a harem; they know how it's done, they've seen it done every day, but they're unable to do it themselves.”