Bloomsday on Broadway, this year hosted by Stephen Colbert, is being streamed on YouTube from New York City's Symphony Space Theater on June 16. Watch back on the performances and readings here! 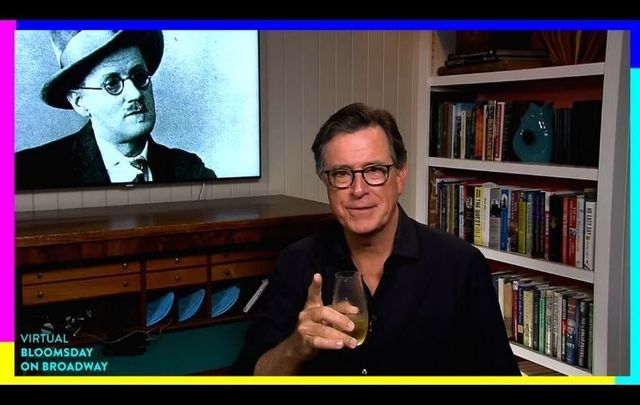 Bloomsday on Broadway, first conceived by Isaiah Sheffer in 1982, is live streaming readings from James Joyce's "Ulysses" this year.

Stephen Colbert introduced this year’s Bloomsday on Broadway event, which is  being hosted virtually on YouTube from the Symphony Space Theater in New York City on June 16.

Bloomsday on Broadway is a celebration of James Joyce’s masterpiece “Ulysses," which was published in 1902. The novel, which is one of the most famous publications of the 20th century, follows the characters Leopold Bloom, Stephen Dedalus, and Molly Bloom through a single day - June 16, 1902 - around Dublin.

“Beginning at 8am on June 16th, a cavalcade of actors, authors, and musicians will drop in throughout the day with music and readings from one of the greatest literary works in history.”

Colbert, host of ‘The Late Show with Stephen Colbert,’ is set to be joined by some Hollywood A-listers for this year's event, including Brian Cox, Hugh Dancy, Claire Danes, Kate Mulgrew, Cynthia Nixon, Fiona Shaw, Dan Stevens, and more.

Read More: Bloomsday: These are the Dublin spots featured in James Joyce's 'Ulysses'

Bloomsday on Broadway was created by Isaiah Sheffer in 1982. In an introduction for "yes I said yes I will Yes.: A Celebration of James Joyce, Ulysses, and 100 Years of Bloomsday," Sheffer said he designed the event for “those who are new to Joyce’s work, or awed or frightened or just simply bewildered by it, [to] be swept up and carried into Bloom’s world by the voices, the intelligence, and the brimming enthusiasm of terrific actors.”

Here's the Virtual Bloomsday on Broadway 2020 schedule (all times EST), which will be streamed on YouTube:

8 AM: From Episode I
Telemachus performed by Stephen Colbert

8:45 AM: From Episode II
Nestor performed by Rita Wolf

9:30 AM: From Episode III
Proteus performed by Zach Grenier

10:15 AM: From Episode IV
Calypso performed by Fiona Shaw

11:45 AM: From Episode VI
Hades performed by Malachy McCourt

5:45 PM: From Episode XIV
Oxen of the Sun performed by Brian Cox