St. Finbarr's Day: Do you celebrate "Gougane Sunday" on September 25? 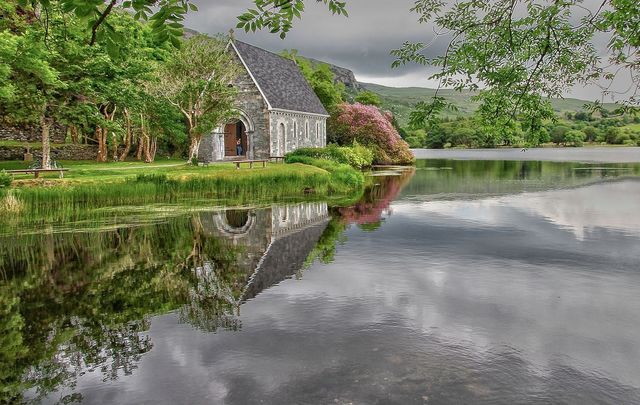 In Cork, September 25 is the feast day of the county's patron Saint Finbarr.

It is a day which is usually marked on Sunday of, or before, the 25th and is known locally as "Gougane Sunday."

The day usually begins with the sound of the Ballingeary Pipe Band waking up the hills of the quiet valley as they lead a procession of pilgrims into the island hermitage of St Finbarr where the rosary is recited before Mass is celebrated by the Bishop of Cork.

The beauty of Gougane Barra has drawn people of all persuasions throughout the centuries. Hill-walkers and writers, artists, and musicians have all found their way into the still valley tucked away in the Muscraí Gaeltacht.

Among those who ventured here was the poet JJ Callanan who wrote what is perhaps the most famous piece of poetry about Gougane Barra.

Who was JJ Callanan, poet of "Gougane Barra?"

Born into a medical family in Ballinhassig in South County Cork in May 1795, his parents John Callanan and Mary Barry christened their son Jerimiah Joseph Callanan.  His siblings and friends called him Jerry but when he composed poetry he did so under the name 'JJ Callanan.'

Young Callanan was sent to Maynooth at the age of 17 to study for the priesthood but, he was deeply unhappy there and decided that life as a man of the cloth was not for him. He then transferred to Trinity College to take up lectures in medicine, much to the delight of his physician father.

Before he entered Trinity, Callanan had never displayed any poetic leanings but when he enrolled in that great seat of knowledge in Dublin city he instantly was drawn to poetry.

Callanan's restless character saw him ditch his studies at Trinity after two years, much to the displeasure of his father and returned to Cork to craft his newfound passion: poetry.

He went on to contribute to the Blackwood Magazine and won prizes for his work. He was given a teaching position in William Maginnis school in Cork which gave him the means to travel around the county collecting folk stories, ballads and creating his own.

Callanan was drawn to the green valley where St Finbarr's hermitage lay by the waters of the River Lee. He developed a love for Gougane Barra and wrote a poem in honor of the picturesque place. The piece he simply titled "Gougane Barra" was composed shortly after he had taken cover there under a tree by the hermitage wall during a downfall of Summer rain in 1826.

Callanan traveled the county in all weathers and it no doubt, contributed to his ill health. In 1828 he left Cork for Lisbon when he was offered a tutoring position for a rich merchant Irish family living there. He would not have accepted the job if he had not been struck down with TB and needed an escape to a much warmer climate.

Unfortunately for Callanan, his stay in Lisbon would be cut short when his health declined. Determined to sail home and die in his native Cork, Callanan made it on board a ship to return home but his condition worsened and he was taken off-board. Days later he died at the age of 32 on September 29, just four days after the feast day of St Finbarr.

Each year pilgrims venture to St Finbarr's island hermitage on Gougane Sunday and will pass by a headstone that doesn't mark a grave but remembers a man whose resting place is in another country.

The marker remembers JJ  Callanan at the same spot where he sheltered from rain and was moved to compose a piece of poetry on the holy place.

He may lie in an unknown spot by the banks of the Tagus River in Lisbon but in Cork JJ Callanan is remembered where "a thousand wild fountains come down to that lake from their homes in the mountains."

Three is a green island in lone Gougane Barra,

Where Allua of songs rushes forth as an arrow,

Come down to that lake from their homes in the mountains.

There grows the wild ash and a time stricken willow,

Looks chidingly down on the mirth of the billow,

As like some gay child that sad monitor scorning,

It lightly laughs back to the laugh of the morning.

And its zone of dark hills oh to see them all bright'ning,

When the tempest flings out its red banner of lightning,

And the waters rush down mid the thunders deep rattle,

Like clans from their hills at the voice of the battle,

And brightly the fire crested billows are gleaming,

And wildly from Mullagh the eagles are screaming,

Oh! Where is the dwelling in valley or highland,

So sweet for a bard as this lone little island.