St. Brigid's Well is only a short distance from the Cliffs of Moher in County Clare and visitors can admire the holy shrine created by pilgrims. 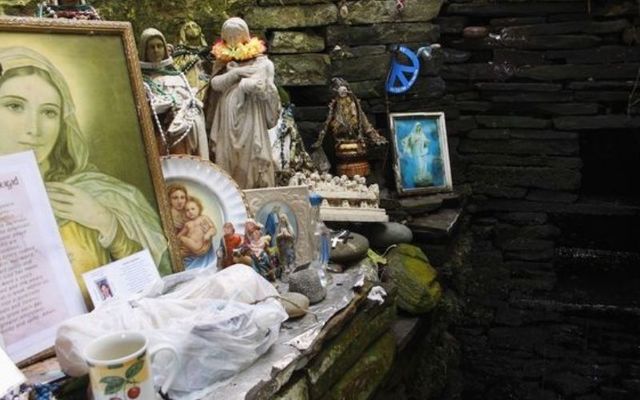 St. Brigid’s Well in Liscannor, County Clare is one of the oldest wells in Ireland and legends say that it has healing powers.

Located a short distance from the Cliffs of Moher, St. Brigid's Well is housed in an open stone house or grotto that serves as a gateway to the ancient cemetery on the hill above it.

The well is regarded as a place of healing and inside the grotto is lined with mementos, rosaries, prayers, and pieces of offerings left by pilgrims. The peaceful sound of the running water from the well is also audible and traditionally a sip of this water should be done at the end of a visit to the shrine.

While the graveyard above and behind the well is the final resting place of several mythical kings and clan leaders of Ireland. Still to this day, pilgrims celebrate Brigid’s roots by spending the pagan harvest festival of Lughnasadh in the circular sanctuary of this well.

Saint Brigid’s Day, or Lá Fhéile Bríde in Irish, falls on February 1st. It is also the day of the old Celtic festival of Imbolc. This ancient Celtic pagan feast marks the start of longer days and is one of the ‘quarter days’ of the Celtic calendar which marked the mid-points between solstice dates, as the earth’s journeys around the sun.

In Irish folklore, Brigid and her sisters also named Brigid are a triple Goddess and she is the goddess of higher ground, higher learning, and higher consciousness. She is the patron goddess of the Druids and visible signs of Druid language and pagan worship is still seen in the well.

Unable to eradicate Brigid’s popularity with the Celts, Christendom renamed her Mary of the Gaels or Brigit who became known as the foster mother of Jesus. They placed statues in her dedicated spaces and canonized her in the 5th century, making her a saint. Her symbolic cross made from rush can be seen throughout the countryside.