Born to Irish parents in New York, William Francis Sutton went on to become one of America's most famous bank robbers. 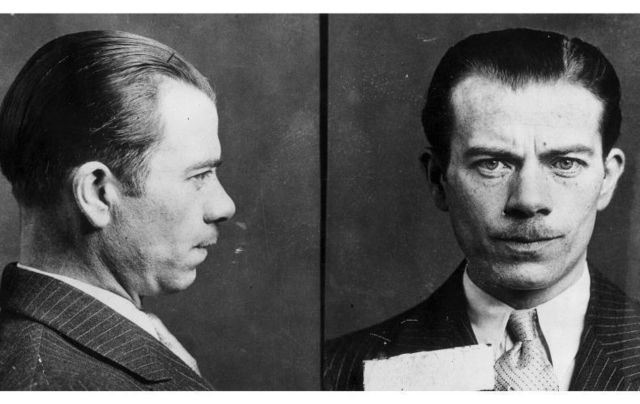 Born to Irish parents in NY, William Francis Sutton went on to become one of America's most famous bank robbers. Getty Images

Willie Sutton was born in the so-called "Irishtown" section of Brooklyn in the early 20th century.

America’s most infamous bank robber, William Francis Sutton, was born in 1901. The son of Irish parents, Sutton was brought up in dire poverty in the Brooklyn tenement neighborhood of Irishtown.

He is most famous, of course, for one immortal line attributed to him by a crime reporter:

"Willie, why do you rob banks?"

"Because that's where the money is," he famously replied.

Some dispute that he said it, but it has become one of America’s most immortal phrases.

He stole $2 million from banks in his career and robbed about 100 in all. He escaped from three maximum-security prisons.

His father was a blacksmith, rarely home because he had to work so hard, and his mother suffered from depression, deeply impacted by the childhood death of her daughter.

It was tough times in America with the Depression beckoning and banks were seen as the preserve of the rich and high and mighty. But Willie knew banks was where the money was.

Willie Sutton developed an uncanny insight in how to rob them and he became, in one critic's words: “The face of American crime, one of a handful of men to make the leap from public enemy to folk hero. (Even cops loved to be photographed with him).

“He believed in study, planning, hard work. And yet he was also creative, an innovator, and, like the greatest artists, he proved to be a tenacious survivor.

“He escaped three maximum-security prisons, eluded cops and FBI agents for years. He was Henry Ford by way of John Dillinger—with dashes of Houdini and Picasso and Rasputin. Willie has a natural animosity towards the banks and the Wall Street tycoons.”

Sutton was the fourth of five children. An FBI account states he attended school through eighth grade, then left home to secure a job. Sutton’s employment included jobs as a clerk, a driller, and a gardener.

His longest continuous employment lasted 18 months. Sutton was married in 1929, but his wife divorced him after he was incarcerated. He remarried in 1933. Before his death, Sutton co-authored “I, Willie Sutton” and “Where the Money Was.”

Willie Sutton acquired two nicknames, “The Actor” and “Slick Willie,” for his ingenuity in executing robberies in various disguises. Fond of expensive clothes, Sutton was described as being an immaculate dresser.

Although he was a bank robber, Sutton had the reputation of a gentleman; in fact, people present at his robberies stated he was quite polite. One victim said witnessing one of Sutton’s robberies was like being at the movies, except the usher had a gun. When asked why he robbed banks, Sutton simply replied, “Because that’s where the money is.”

On February 15, 1933, Sutton and a confederate attempted to rob the Corn Exchange Bank and Trust Company in Philadelphia. Sutton, disguised as a mailman, entered the bank early in the morning. The curiosity of a passerby caused the robbery attempt to be abandoned. However, on January 15, 1934, Sutton entered the same bank with two companions through a skylight. When the watchman arrived, they forced him to admit the employees as usual. Each employee was handcuffed and crowded into a small room.

Sutton also executed a Broadway jewelry store robbery in broad daylight, impersonating a postal telegraph messenger. Sutton’s other disguises included a policeman, messenger, and maintenance man. He usually arrived at the banks or stores slightly before they opened for the day.

Besides being known as an innovative robber, Sutton was recommitted in June 1931 on charges assault and robbery. Sentenced to 30 years, he escaped on December 11, 1932, by scaling the prison wall on two 9-foot sections of ladder that were joined together.

Sutton was apprehended on February 5, 1934, and was sentenced to serve 25 to 50 years in Eastern State Penitentiary, Philadelphia, for the machine gun robbery of the Corn Exchange Bank.

On April 3, 1945, Sutton was one of 12 convicts who escaped the institution through a tunnel. Sutton was recaptured the same day by Philadelphia police officers; this had been his fifth escape attempt at this prison.

Sentenced to life imprisonment as a fourth-time offender, Sutton was transferred to the Philadelphia County Prison in Homesburg, PA. On February 10, 1947, Sutton and other prisoners dressed as prison guards. The men carried two ladders across the prison yard to the wall after dark. When the prison’s searchlights hit him, Sutton yelled, “It’s okay,” and no one stopped him.

On March 20, 1950, Willie “The Actor” Sutton was added to the FBI’s list of Ten Most Wanted Fugitives. Because of his love for expensive clothes, Sutton’s photograph was given to tailors as well as police departments.

A 24-year-old tailor’s son recognized Sutton on the New York subway on February 18, 1952, and followed him to a local gas station where Sutton purchased a battery for his car. The man reported the incident to the police who later arrested Sutton.

Sutton had powerful friends in the Mafia whom he had met in prison and they were incensed that he had been turned in by an informer. The young tailor was later shot and killed.

Sutton did not resist his arrest by New York City police but denied any robberies or other crimes since his 1947 escape from Philadelphia County Prison. At the time of his arrest, Sutton owed one life sentence plus 105 years. He was further sentenced to an additional 30 years to life in New York State Prison following a jury trial in Queens County Court.

Seventeen years later, the New York State penal authorities decided that Sutton did not have to serve two life sentences and 105 years. Sutton was ill; he had emphysema and was preparing for a major operation on arteries in his legs. On Christmas Eve 1969, 68-year-old Sutton was released from Attica State Prison. Ironically, in 1970, Sutton did a television commercial to promote the New Britain, Connecticut Bank and Trust Company’s new photo credit card program.