When the Wild West came to Dublin, the Croke Park Rodeo 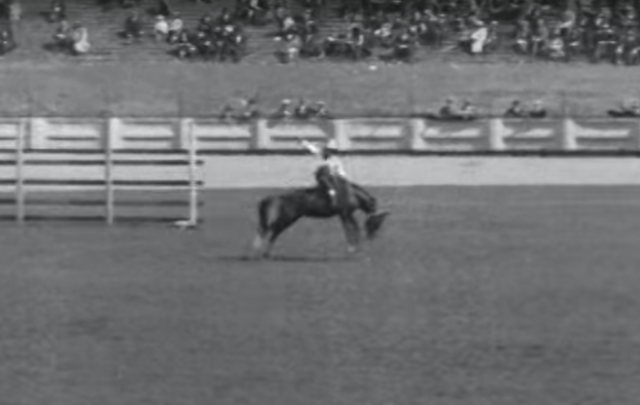 On Aug 18, 1924, the American Wild West arrived in Dublin city. For a week Croke Park played host to The Tex Austin Rodeo and Gaelic Athletic Association (GAA) headquarters saw some 35,000 spectators flow through the turnstiles for the daily 2:30pm and 6:30pm shows.

Tex Austin was born as Clarence van Nostrand, in Missouri, in 1885, but he assumed the name "Tex Austin" and claimed to be a true blue cowboy from the Lone Star State in order to enhance his rodeo credentials!

Tex began touring his own rodeo show in 1918 taking it across the United States before going to Europe in the 1920s. Before arriving in Dublin, The Tex Austin Rodeo wowed crowds at Wembley Stadium in London.

The rodeo in Croke Park showcased the best in wild west activities such as horse barrel racing, bronc riding, steer wrestling and bull riding. The show consisted of some 60 cowboys and cowgirls who contested to earn their pay. Some cowboys and cowgirls were Argentinian, Mexican and Australian, while others were of Irish extraction such as Vera McGinnis. She was a daughter of Irish immigrants born in Missouri and she caused a stir when she became the first female rodeo star to appear in trousers rather than a skirt. The bould hussy!

Promo poster for the Dublin Tex Austin Rodeo, at the GAA HQ in Dublin.

Vera's riding career came to an end in 1934 when her horse fell on top of her during a show and caused her injuries which would not enable her to ride professionally again yet, she did live until the ripe old age of 97 and was inducted into the National Cowgirl Hall of Fame.

Tommy Kirnan was another Irish American cowboy who wowed the Croke Park crowds with his roping skills. He was born in New Jersey of Irish immigrant parents and was only ten years old when he began performing with the famous Buffalo Bill Wild West show. Kirnan would go on to promote his own rodeo shows and died in Iowa in 1937 after years of rodeo injuries finally caught up with him. He was inducted to the Cowboy Hall of Fame in 1977.

Like any sporting event held in Croke Park, a programme was printed for the spectators attending the Tex Austin Rodeo. It included cowboy terms and pen pictures of the rodeo stars.

Read more: The Cork man hanged in the Wild West for the famous Bisbee Massacre

As with any rodeo shows there were dangers. On the second day of the Croke Park show, Charles Aldridge was bronco riding across the turf when he was violently thrown from the bucking horse. Fortunately for him, all he suffered was a broken leg. Another injury occurred shortly afterwards when Rube Roberts fractured his ribs while steer wrestling.

One of the most crowd-pleasing events was the one which saw audience participation. Tex Austin, playing the role of ringmaster, would loudly offer £5 to any spectator brave enough to ride a bucking horse for 30 seconds. During the week-long event, only one person claimed the prize - Mr Michael Hayes from the Curragh who judging by his address was well used to the equine world anyway!

Tex Austin would bring his rodeo to London again in 1934 but alas due to a clash in the GAA calendar the rodeo did not make a return to Croker. Today a 9-minute newsreel of the 1924 Dublin rodeo survives and can be viewed on YouTube here:

Alas, the tale of Tex Austin ends on a sad note as the Great Depression in the 1930s affected his business. He lost a 5,000-acre ranch in New Mexico and his touring rodeo show was cancelled. His health failed and he was losing his sight. At the age of 53, Tex Austin committed suicide in 1938. He was found in his garage in a fume-filled car with photos of his old rodeo show days stacked next to him, including pictures of that week-long spectacle on the hallowed turf at Jones Road in 1924.