Dan Kelly the Corkman whose new life in America ended at the end of a rope in the Wild West in town aptly called Tombstone. 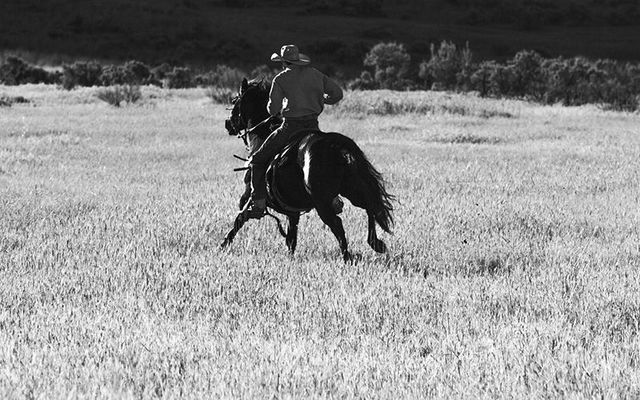 Before he was hung Dan Kelly, in a loud Cork accent said "Let her loose". Getty

Dan Kelly the Corkman whose new life in America ended at the end of a rope in the Wild West in town aptly called Tombstone.

On the 22nd of February 1884 four men were marched to the gallows in the town of Tombstone Arizona. The men were facing the consequences of a robbery they carried out and as the ropes were placed around their necks the last voice heard from the gallows came through in a Cork accent - "Let her loose"  Dan Kelly shouted before the trap door dropped and he and his fellow condemned faced their maker.

The Corkman had been in the United States just under three years before he met his end in the infamous wild west town of Tombstone.
Dan "Yorkie' Kelly left Cork in 1881 as a 21-year-old seeking a better life in the land of opportunity. On a ship from Queenstown, Kelly landed in New York and like many adventurous lads at the time he headed west. By 1883 he was living in Clifton, Arizona with fellow Irish immigrants but. Along the way, he fell in with cowboy outlaws and in December 1883, Kelly became part of the gang that carried out The Bisbee Massacre.
Read more: Top ten Irish outlaws with Irish roots from Ned Kelly to Whitey Bulger
Bisbee town did not have a bank but it did have a general store, the Goldwater and Castaneda Mercantile,  which held a safe and each evening the payroll of the local mine was put in that safe. On December 8th, 1883 five masked men rode into Bisbee with intentions of taking the contents of the safe. The gang judged that $7,000 worth of mine payroll would be lodged in the safe at 8pm but they timed it wrong and chaos ensued.
John Heath, a dubious Texan who did not take part but did mastermind the robbery, had moved to Bisbee in November 1883 with his friend James "Tex" Howard. In Bisbee they befriended Dan Dowd, Red Sample, William Delaney, and Dan "Yorkie" Kelly. Heath had a track record when it came to dodgy activities. He was a cattle rustler, a common thief, and a brothel owner.
On the evening of December 8th, the robbers rode into town and tied up their horses at the end of the main street. They strode up to the store, three entered and two remained outside guarding the door. With pistols drawn the robbers ordered the employees to open the safe. The payroll had not arrived yet, the robbers misjudged the time, and they had to make do with what was in the safe - a few hundred dollars.
Outside on the street people noticed something was going on in the general store and they challenged the two robbers on guard at the door. JC Tappenier was one of those who confronted the robbers and he received a dose of hot lead for his bravery.
Sheriff Tom Smith who was dining in the restaurant across from the store heard the commotion and ran to the scene where he too was cut down by a bullet. Anne Roberts who ran the restaurant and was pregnant rushed to the door to see what was happening but, a bullet struck her and she too became a victim of what would be called The Bisbee Massacre.
John Nolly mistakingly rode straight into the chaos and as he tried to take cover under his wagon he was shot. The robbery had turned into a scene of bloodshed. As the robbers ran for their horses at the end of the street they fired indiscriminately, injuring a number of people.
Read more: The last man hanged in Ireland - the lamentation of Michael Barrett
The robbers rode off and a reward of  $2000 dollars was raised for their capture. A posse was organized and, in a brazen move, John Heath joined it. The posse left town and followed the tracks of the wanted men but Heath tried to put them off the scent. Heath's interference resulted in the posse splitting up in two directions but they soon caught their prey.
The first to be caught was Tex Howard, known associate of Heath. He was quickly identified because he was the only one who failed to wear a mask and suspicion soon moved to Heath and he was also arrested. Kelly the Corkman masqueraded as a hobo on a train but he was identified in New Mexico and brought back to Arizona in handcuffs.
Sample was identified in a saloon in Clifton, Arizona, and hauled back in chains to Tombstone while Dowd was caught south of the border in Mexico. The last caught was Delaney who was arrested following a bar brawl and identified as one of those involved in the Bisbee Massacre.
Heath, Dowd, Sample, Kelly, and Delaney went on trial in Tombstone in February 1884. The trial lasted three days and all men were found guilty and sentenced to hang, except for Heath who was instead sentenced to life.

This did not sit well with the public and a lynch mob broke into the county jail where Heath was locked up and removed him by force. They took him to a telegraph pole on the aptly named Toughnut Street where a rope was placed around his neck. Heaths last words were "I have one favor to ask. That you will not mutilate my body by shooting into it after I am hung."
After Heath was lynched, a placard was placed on the pole which read: "John Heath was hanged to this pole by the citizens of Cochise County for participating in the Bisbee massacre as a proved accessory at 8:00am February 22nd, 1884 (Washington's birthday) advance Arizona!"
Heaths body was buried in Boothill cemetery but later dug up by his family's request and sent to Texas where they buried him in an unmarked grave. Today a grave marker still sits in the spot where Heath was buried in Boothill.
In the days before the hangings, a journalist was granted access to interview the condemned men. In the interview, Kelly boldly stated: "I will walk upright to the gallows."
The hangings were national news and drew crowds into the town to witness the grim deed. Local businesses cashed in on the morbid occasion and one businessman constructed a grandstand and charged tickets -  $1:50 for the best seats to watch the show! One person who found this repulsive was Nellie Cashman, a native of Cork who challenged the way the hangings were being conducted.
Cashman was born Nellie Cronin in Midleton in 1845 and emigrated with her widowed mother and siblings five years later to America. Cashman was a formidable force in the old west. Nicknamed the Angel of Tombstone for her compassion towards miners and immigrants, she befriended fellow Corkonian Dan 'Yorkie' Kelly and in the days leading up to the executions she and Fr Patrick Gallagher, parish priest of Tombstone and fellow Irish immigrant, tended to the condemned men.
With the help of some miners, Cashman took an ax to the grandstand and chopped it up before hanging day. A row followed and a mini-riot on the street saw a number of people injured, including one man with a broken leg and another with a broken arm! Nellie Cashman got her wish and the destroyed grandstand was left in ruin and no tickets were sold for the hangings.
On the day of the executions up to 1,000 men women and children gathered in Tombstone to witness old west justice. The condemned men were cleanly shaven and dressed in matching black suits and at  1:18pm on March 28th, 1884 the hangings took place. Kelly let out a roar in his thick Cork accent "let her loose" and the hangman did just that. The men dropped and all but one died instantly. Dowd struggled for a number of minutes before his last breath was strangled by the noose around his neck.
Nellie Cashman hired miners to guard the corpses from body snatchers and ghoulish souvenir hunters. For 10 days they guarded the bodies in the town morgue before they were buried in Boothill cemetery where they remain to this day, including Dan Kelly the Corkman whose new life across the broad Atlantic ended at the end of a rope in the wild West.
Read more: How forensic experts matched 1916 leader’s family DNA in order to identify him