The unit of the Mexican Army was composed mainly of Irish Catholic immigrants who deserted the U.S. Army and fought in the 1846 Mexican–American War. 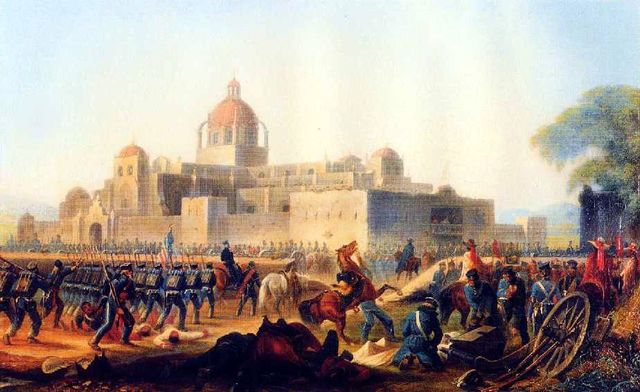 Battle of Churubusco: Lead by Riley, the San Patricios fought successfully in several battles but were eventually part of the Mexican Army’s defeated forces.

One place in history where you might be surprised to see a green and gold Irish-themed military standard is in the 19th century Mexican Army, but it really happened.

St. Patrick’s Battalion, a unit of the Mexican Army, was composed mainly of Irish Catholic immigrants who deserted the U.S. Army and fled to Mexico during the war, which lasted from 1846-48.

The San Patricios, as they were called, were fierce fighters and were instrumental in some of the toughest battles during the war. But why were some of our Irish ancestors in Mexico, and why were they fighting against the U.S. – the very country many of them had immigrated to?

Why did they switch sides?

Very few were official citizens of the U.S. – many were poor Irish immigrants that had left their home country due to famine and poverty. As they arrived in the U.S., many were pressured into joining the army – an offer they often seized when promised a good paycheck and land after the war.

But life wasn’t easy anywhere for Irish immigrants at this time in history. Many found U.S. military culture very alienating and were brutally abused by fellow soldiers and superiors who hated Irish Catholics – nativist sentiment was unfortunately strong in the U.S. Army at the time.

On top of that, military life only offered Protestant religious services. Once these Irish immigrants began to learn more about their enemy – Mexico printed pamphlets persuading immigrants to desert the U.S. army – some felt they had more in common with Mexicans than Americans.

Many Mexicans were Catholic, which was important, but it’s also likely that the Irish Catholics saw the Mexican struggle against America as similar to their countrymen’s struggle against England back home.

Whatever the reason, soldiers began to desert in droves just prior to or early on in the war. A good example is the eventual leader of the San Patricios, John Riley.

John Riley was born in County Galway in the year 1818. His birth record can be found in our Irish Catholic parish baptism records from that year.

Riley immigrated to Canada and eventually made his way down to Michigan, where he enlisted in the U.S. Army. He served in the 5th US Infantry Regiment, which was part of the army future President Zachary Taylor commanded during the Mexican American war.

As Taylor’s army reached the Rio Grande, many German and Irish immigrants began to defect. The Mexican army had been issuing leaflets promising deserters money, land and promotion. Riley and a group of 48 other Irish immigrants defected around this time, and they manned artillery for Mexico during the siege of Fort Texas in early May 1846.

The group grew in size, joined by other recent, disgruntled and marginalized immigrants – historians estimate the strength of the unit to be as much as 700 members at its peak. Lead by Riley, the San Patricios fought successfully in several battles but were eventually part of the Mexican Army’s defeated forces at the Battle of Churubusco.

Many were killed or escaped with the fleeing Mexicans in the aftermath of this battle, and about 85 were captured by U.S. forces. Riley was wounded during the battle and was among those captured.

The captured San Patricios were put on trial – some claimed they deserted the U.S. Army out of drunkenness (a common defense used for military desertion at the time), others claimed they were coerced by Mexicans who captured them. Most of those charged either did not offer a defense, or their statements weren’t recorded.

At his trial, John Riley testified to the terrible discrimination suffered by Irish Catholics in the U.S. Army and cited the general anti-Catholicism in America as the major reason for the desertion of Irish immigrants. Riley received a lesser sentence than most others in the unit since his defection occurred before the U.S. was formally at war.

Branded with a “D” on his cheek for deserted, Riley was released and actually went on to continue serving in the Mexican Army.

Others were not so lucky. Fifty of the captured San Patricios were executed, most by hanging. Of the 9,000 men who deserted the U.S. Army during the Mexican War, the San Patricios were the only ones that suffered this punishment.

The early history of the San Patricios from the US perspective labeled the group as traitors, though Mexicans have always viewed the group as heroes who helped Mexico in a time of great need.

Contemporary historians look more objectively upon the San Patricios – most see their desertion as a manifestation and natural result of the anti-immigrant and particularly anti-Catholic sentiments in the United States at the time.

It’s interesting to note that Irish expatriates have a well-documented history of fighting wars on behalf of other heavily Catholic nations. Many young men, so-called “Wild Geese,” fought in the continental wars of Europe for Spain in the 16th and 17th centuries. Irish fighters have also played important roles in South American wars for independence.

The tale of St. Patrick’s battalion is another example of how difficult life was for many of our Irish immigrant ancestors. Whether they remained in their famine-stricken homeland, toiled in the slums of New York City, or joined the military, it’s worth knowing the story of their sacrifice.

What do you think were the men of Saint Patrick's Battalion traitors or heroes? Let us know your views in the comments section below.