WATCH: A stunning look at Ashford Castle and Kylemore Abbey more than 70 years ago

Desmond Egan's "By Corrib Waters," presented by the Irish Film Institute on their IFI Player, provides a fascinating look at what two of Ireland's most iconic sites were like more than 70 years ago. 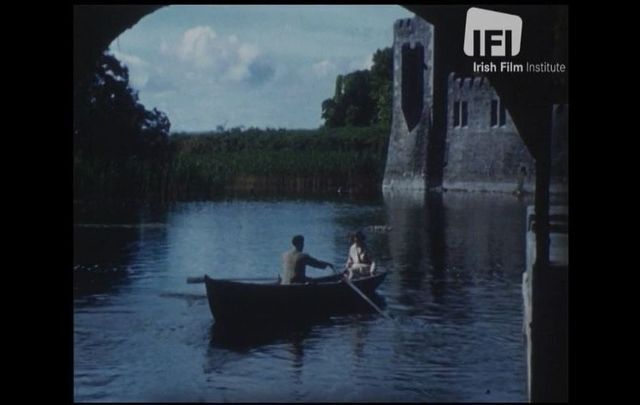 A man and a woman outside of Ashford Castle in Co Mayo in 1946, as featured in Desmond Egan's "By Corrib Waters" Irish Film Institute

“By Corrib Waters” is available to stream for free on the IFI Player.

Desmond Egan's “By Corrib Waters," which offers a stunning look at two of the most iconic sites in Western Ireland back in 1946, is available to stream for free on the Irish Film Institute's IFI Player.

The IFI says: "This amateur documentary on the stunning surroundings of Lough Corrib and the Cong River in Connemara is considered to be one of Desmond Egan’s finest films. At the junction of the Cong River and Lough Corrib stands Ashford Castle – now a luxurious hotel but formerly the residence of the Ardilaun family.

"Framed by the stunning surroundings of Connemara, west Ireland, the film also features the superb Kylemore Abbey. It was built in 1867 as a family home for the family of Mitchell Henry, a wealthy doctor from London. In 1920 the Abbey became a Benedictine monastery run by nuns who had fled Belgium in World War I. The Benedictine community restored its famous walled garden to its former glory and it is today one of Ireland’s most popular attractions."

Desmond Egan was a skilled amateur filmmaker with a keen eye for detail. A wine merchant by trade, he lived with his wife and 4 daughters in Glenageary, Co Dublin. His films were shot between 1937 and 1957.

Egan had been involved in a professional capacity with architect Michael Scott (designer of Busáras) and cameraman George Fleischmann when they established the production company Hibernia Films in 1945. The company produced a series of government information films, including Silent Order, Next Please, and Voyage to Recovery.

His professional experience no doubt influenced his own film-making activity. His films, unlike those of many other amateurs, are finely-crafted and edited works. He worked exclusively with color film rendering his beautiful garden (his wife’s pride and joy), his home (designed by Michael Scott), and his daughters’ childhood with great warmth and vibrancy. His short documentaries, though silent, are invaluable records of the subjects they explore. Shot with great skill, they are all cleverly constructed and edited to include explanatory titles and inter-titles.

To see more from the Desmond Egan Collection from the Irish Film Institute, click here.

The video below is published with thanks to the Irish Film Institute (IFI), who IrishCentral have partnered up with to bring you a taste of what their remarkable collection entails. You can find all IrishCentral articles and videos from the IFI here.

With kind permission of Shirley Cullen.