Footage shot by American ornithologist Benjamin Gault was recently uncovered in Chicago, offering a glimpse into daily life in Ireland during the 1920s. 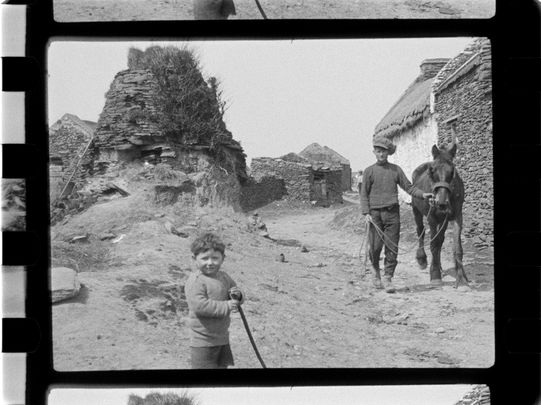 Incredibly rare footage of life in 1920s Ireland has been uncovered in Chicago, offering a glimpse into Irish life in the early days of independence from Britain.

Dingle native Mícheál Ó Mainnín had heard stories from his grandfather about an American ornithologist named Benjamin Gault who visited the Kerry town in the mid-1920s to study birds, collect specimens, and film the natives with a hand-cranked camera.

Ó Mainnín's grandfather claimed to have stuck a pipe in a dog's mouth while Gault was filming one day, which Ó Mainnín doubted.

"It was a very far-out story," he told the New York Times. "You would never think it was true."

Long after Ó Mainnín's grandfather died in 1981, his family decided to trace down the footage and Ó Mainnín set about searching for Gault in 2011 with little more to go on than the American's name.

Ó Mainnín's search led him to the Chicago Academy of Sciences, which is home to Gault's collection, including his old film footage.

Dawn Roberts, the academy’s senior director of collections, was trying to raise funds to digitize Gault's reels when Ó Mainnín contacted her looking for the footage.

An extremely rare and precious collection of film depicting life in Ireland in 1920s has been discovered in America. Wonderful scenes from west Kerry, captured by an American ornithologist in 1925. Being digitised and made available to the public by @IFI_Dub and @sfsilentfilm pic.twitter.com/yNUd7FmKFj

She told him that the academy did not have the resources to digitize the reels but shared catalog notes, journal entries, and photographs with Ó Mainnín, kickstarting a long digitization process.

Ó Mainnín brought the material to the Irish Film Institute to see if it could help fund the digitization of the footage.

Manus McManus, the film collections and acquisitions manager at the institute, helped secure some funding from a non-profit to help fund the process.

McManus told the New York Times that footage from Ireland in the mid-1920s was incredibly rare, with most footage from the era coming in the form of newsreel footage of major events.

There is precious little footage of ordinary people going about their daily lives in the years following the Irish War of Independence and Civil War, he said.

News of the efforts to digitize the rare footage reached Rob Byrne, the President of the San Francisco Silent Film Festival. Byrne lives in Ireland and had been looking for an Irish project to unveil at the festival when he heard of the story.

Byrne's film festival also had a lot of experience in restoring old footage and the task of restoring Gault's rare footage was left to Kathy O'Regan, the festival's senior film restorer, once the footage had been digitized by a third-party laboratory.

O'Regan is from Gort in County Galway and said that it was "magical" to see footage of rural Ireland from almost 100 years ago.

"On a personal level, the first time I watched it was so exciting. There’s this one shot of two farmers who are planting potatoes, and I swear to God, one of the men is the absolute spitting image of one of my next-door neighbors," she said.

Byrne said that the footage was shot on 35-millimeter nitrate film, a very professional and higher-resolution medium that also makes the film highly flammable and difficult to preserve.

He said that Gault's reels were in excellent condition but added that they would not exist 50 years from now.

McManus plans to screen the footage in Dingle once it has been graded and restored and is hopeful that some of the locals will be able to identify the people in the footage.

Ó Mainnín has finally been able to watch the footage that his grandfather used to talk about, offering him a chance to see familiar faces in a different era.

"I know all those people that were in the film, but they were older, But that’s when they were young and strong and full of life," he told the New York Times.

To Ó Mainnín's surprise, Gault's footage did, in fact, include a dog smoking a pipe.