Over a century ago people never thought the Irish would make upstanding Americans citizens. 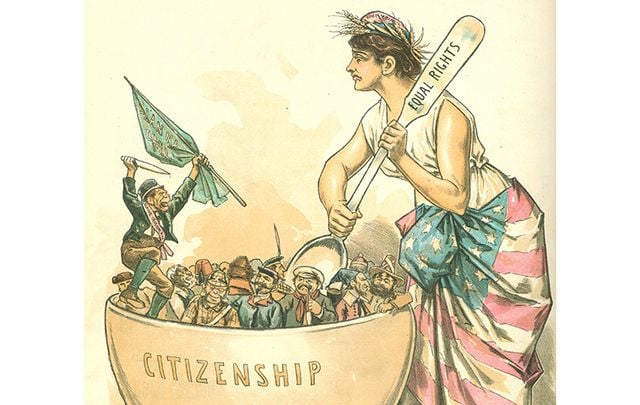 A cartoon from 1889 illustrates perfectly the anti-Irish sentiments of the period. Entitled “The Mortar Of Assimilation—And The One Element That Won’t Mix” it appeared in Puck magazine and shows Irish Americans as the one unruly ethnicity that refuses to integrate into the melting pot of American citizenship.

America, portrayed by a worried looking woman wearing the star spangled banner, is mixing the melting pot with a spoon entitled ‘Equal Rights’ but despite her best efforts the one nation that refuses to be mixed is an ape like Irishman wielding a knife and wearing a fearsome expression.

Such a view was not an uncommon one in the 19th century. Many worried that large influxes of Irish Catholics would change the inherently Protestant nature of the United States and stereotypes that the Irish were drunken louts were prevalent.

The willingness of Irishmen and women to work for low wages - such was their desperation to feed and house themselves - meant they often undercut local labor. Leading to tensions between immigrant and native-born communities.

Read more: The origins of anti-Irish jokes and how they impacted Irish worldwide

So-called ‘No Irish Need Apply’, or ‘NINA’, signs were also common with Ted Kennedy telling the US that he even remembered them growing up in the Boston of the 1930’s.

Worse than mere discrimination was the physical violence that sometimes followed the Irish community. In 1831 a mob burnt down St Mary’s Catholic Church in New York City and in 1844 nativist riots broke out in Philadelphia after rumours began to circulate that the local Irish wanted the Bible removed public schools. 13 people died and a number of church were razed to the ground.

The prejudice event went as far as the White House: Woodrow Wilson cordially loathed Irish America and found their found advocacy of Irish independence got in the way of his all-important alliance with Britain.

“I have one weapon I can use against them,” he once raged to his press secretary after one particularly unfavorable set of newspaper headlines. “One terrible weapon… I only have to warn our people of the attempt of the Roman Catholic hierarchy to dominate public opinion, and that if necessary I shall go home and tell the public.”

And although he never carried through with his threat, it was clear there was no love lost.

“Any man,” he once declared, “who carries a hyphen about with him [i.e., a hyphenated American] carries a dagger that he is ready to plunge into the vitals of this Republic whenever he gets ready."