"I am not indulging in “PC gone mad.” I am merely pleading for a little self-examination and common civility." 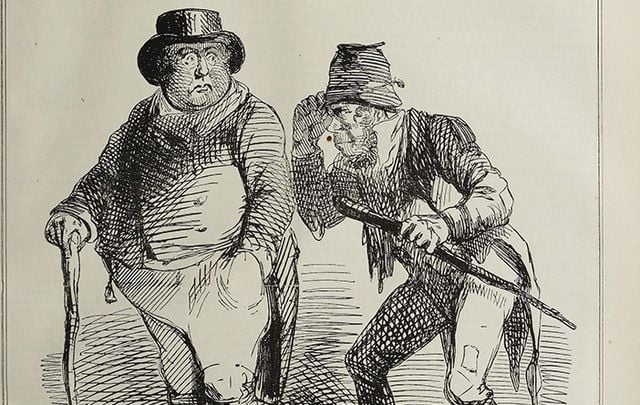 A Punch cartoon: An Irish beggar approaches John Bull: “Spare a thrifle, yer Honour, for a poor Irish lad to buy a bit of…a Blunderbuss with.”

Even here in Sri Lanka the locals tell me negative Irish jokes. Let me kick off by saying that I am a great supporter of freedom of speech. I firmly believe that no one has the right not to be offended. If I am offended by “Irish jokes” that is my problem. I certainly would not want to put anyone in gaol for enjoying “Irish jokes.”

There would be no point in me saying that I wanted to ban them because I cannot even dissuade my friends and family from telling them to me, even though they know that I detest them. All I want to do is to argue the case for disliking them by examining their history and psychopathology.

A very dear Sri Lankan friend of mine keeps sending me emails with titles like “You’ve got to love the Irish.” These e-mails are compilations of “Irish jokes,” jokes whose main point is to illustrate that Irish people are intrinsically thick. My secondary response, after the initial “racist bitch” was: “Why have you got to love the Irish?” Her reply was: “Because they are so dumb.”

I patiently explained to her that, although the jokes did indeed illustrate elements of stupidity, they were actually fictive constructs, made-up stories, and were not evidence of the stupidity of actual human beings in the real world. Only last week, another Sri Lankan, knowing my Irish heritage, mailed me a round robin including a joke showing the cretinism of the Irish. Many people piled in to say how wonderfully amusing this was. I refrained from thanking them for insulting my family, my race and myself.

I did protest when someone on a social media site (someone who had the grace to describe me as “wise and witty,” i.e. not thick) found it impossible to address me without adopting a stage-Oirish accent. I asked him why he did this, why my mere Irishness was so irresistibly risible to him. I asked him if he would ever contemplate addressing his hero Obama in the tones of a black minstrel. He fell out with me and called me “prickly.”

People say to me, “Where’s your sense of humour?” George Bernard Shaw, in his essays, warned English tourists not to visit Ireland because the Irish were determined to resist English illusions about them: “It is a point of honor with the Modern Irishman to have no sense of humor.” Shaw believed that Modern Ireland was in full reaction against both servility and the construct of the “stage Irishman.”

Anti-Irish behavior was a part of British life from the Middle Ages and it was helpful to have a stereotype to justify it. The mid-Victorian years – between the Famine and the emergence of the Home Rule movement – witnessed by far the most intense examples.

In his book, "The Eternal Paddy," Michael de Nie examines anti-Irish prejudice, Anglo-Irish relations, and the construction of Irish and British identities in nineteenth-century Britain. He offers a detailed analysis of British press coverage of Ireland over the course of the nineteenth century. His book traces the evolution of proposed solutions to the “Irish question,” focusing particularly on the interrelationship between the press, the public, and the politicians.

De Nie claims that British press opinion about the Famine was profoundly influenced by ideas about Irish incapacity. Matthew Arnold opposed Gladstone’s Home Rule Bill because the “idle and imprudent Irish” were too infantile to govern themselves. The remedy was to encourage the Irish to be more British. Ireland needed to become a country of industrious, well-fed farmers, free of peasant superstition and fecklessness.

The stubborn complexities of real life had to be shoehorned into Arnold’s simplistic schema. As Declan Kiberd put it, recalcitrant reality “had to be converted back into a more familiar terminology of books over facts. And yet it was with the tyranny of facts that Arnold had proclaimed the Celt quite unable to cope!”

It has to be admitted that the Irish were complicit in their own stereotyping. Declan Kiberd has written: “The stereotypical Paddy could be charming or threatening by turns. The vast numbers of Irish immigrants who fetched up in England’s cities and towns throughout the 19th century found that they were often expected to conform to the stereotype: and some, indeed, did so with alacrity… Acting the buffoon, they often seemed harmless and even lovable characters to the many English workers who might otherwise have deeply resented their willingness to take jobs at lower rates of pay.” This seems rather similar to Afro-American male singers adopting castrato falsetto vocal styles to make themselves less sexually threatening.

The “stage Irishman” made an appearance in the novels of Charles Lever and Samuel Lover (sitting alphabetically on my bookshelf – Lever and Lover) as well as in the theater. Mackatawdry, Mackafarty, Phaelim O’Blunder and Bet Botheram O’Balderdash were characters created to portray the Irish as clowns. Playwrights from Ireland itself created similar characters to ingratiate themselves with the London audience. However, a recurrent strategy of the Anglo-Irish writers was to subvert the stereotype by allowing their characters to defeat others with comical aplomb while pretending to be stupid.

Dion Boucicault developed a more sympathetic stereotype in his sentimental melodramas (one of his characters provided Flann O’Brien with one of his many pseudonyms, Myles na gCopaleen). Somerville and Ross wrote a series of books set in the 1890s that became a TV series starring Peter Bowles in the 1980s. My Irish father did not live to see the series but would not allow the books in the house. It is significant that the TV series was a co-production of Ulster TV and Radio Telefís Éireann, epitomising the complicity of the Irish in their own stereotyping.

Perry Curtis in "Anglo-Saxons and Celts," published in 1968, just as the British army was moving into Northern Ireland, offers the thesis that Victorian caricaturists had a deliberate intent to portray the Irish as subhuman and therefore deserving of oppression. Punch’s cartoons became more virulent as the Irish turned to violence in response to their oppression. An Irish beggar approaches John Bull: “Spare a thrifle, yer Honour, for a poor Irish lad to buy a bit of…a Blunderbuss with.”

In 1971 Curtis published "Apes and Angels: the Irishman in Victorian Caricature." Its central thesis was that Victorian anti-Irishness was fundamentally racist. According to Curtis, an American, images of the Irish in political cartoons underwent a change from harmless, whiskey-drinking peasants to apelike monsters threatening law, order, and middle-class values.

Even in high-flown literary criticism, patronising stereotypes can be found. The fiery Irish poet and critic Tom Paulin (he has been called an anti-Semite for his strong views on Palestine) takes the highly esteemed Canadian critic, Hugh Kenner, to task. “For Kenner, Ireland is a paradise of speech, a land flowing with soft and honeyed words. He believes ‘that the mind of Ireland is held by the reality of talk,’ … What Kenner terms ‘an Irish Fact’... is something that exists only in the mind of the beholder or on the tongue of the talker. The result of this conception of Paddy the Big Mouth is a critical prose which first wraps itself in a rebarbative stage-Irishness and then tries to insinuate that it is really ironizing its own loquacity”.

Paulin’s view is that Kenner is adopting a prose style that “exports Irishness to Britain and America, an essentially comic and servile style that reduces all Irish people to clowns falling about in the darling haze of barroom chat and overworked anecdote.”

The right claimed sole ownership of Common Sense. All else was mere ideology. The term Political Correctness when used by the right means “excessive deference to particular sensibilities at the expense of other considerations.” The term “politically incorrect” came into use as implicit self-praise, indicating that the user was not afraid to speak plainly. Some might say they were just rude and insensitive.

When I express my dislike of Irish jokes I am not indulging in “PC gone mad.” I am merely pleading for a little self-examination and common civility.