The real reason why there aren't any snakes in Ireland

Did Saint Patrick banish all the snakes from Ireland? It turns out the story is a bit more complicated than that. 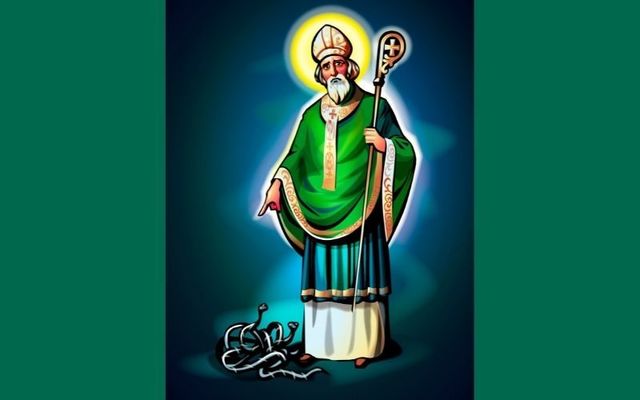 Us Irish don't have to deal with snakes anymore and we've always believed that's down to St. Patrick, our patron saint... or is it?!

Legend tells it that in addition to introducing Christianity to Ireland, St. Patrick banished all the snakes from the Emerald Isle, chasing them into the sea from atop a cliff where he had undertaken a 40-day fast.

As beloved as this element of St. Patrick’s story may be, a brief scientific inquiry and look back through history – such as the one National Geographic conducted in 2014 – reveals that while St. Patrick did a great many things, sending snakes slithering away from Ireland was not one of them.

The truth is that there were never any snakes in Ireland to begin with.

There are no signs of snakes in Ireland’s fossil record. In fact, it’s likely that for millennia there weren’t any snakes in either Ireland or Britain, though Britain eventually gained three species of snakes: the Grass Snake, the Adder Snake, and the Smooth Snake.

So, how did that happen?

During the Ice Age, Ireland and England were too frigid to be suitable habitats for cold-blooded reptiles such as snakes. But then, 10,000 years ago, when the glaciers shifted and land emerges connecting Europe, England, and Ireland, allowing for migration. Animals that did make it to Ireland during this time period included brown bears, lynx, and wild boars.

Ireland is one of many countries where there are no snakes

Ireland is not the only place in the world without snakes – there are no native species of snakes to be found in Iceland, Greenland, Hawaii, New Zealand, parts of Canada, northern Russia, or, not surprisingly, Antarctica . . . meaning St. Patrick would have been a very busy fellow.

Rather, it seems that the snakes have served as an allegory for paganism, which St. Patrick “banished” when he brought the Catholic religion to Ireland’s shores.

"At no time has there ever been any suggestion of snakes in Ireland. [There was] nothing for St. Patrick to banish," Nigel Monaghan, keeper of natural history at the National Museum of Ireland in Dublin, told National Geographic.

Or, as Mark Ryan, director of the Louisiana Poison Center at the Louisiana State University Health Sciences Center, told the magazine, “There are no snakes in Ireland for the simple reason they couldn't get there because the climate wasn't favorable for them to be there."

The only courageous reptile that did make it all the way to and populate Ireland was the common lizard. The Slow Worm, a non-native species of lizard that does not have legs, is often mistaken for a snake even though it was not one.

Interestingly, during the Celtic Tiger, owning exotic snakes became something of a status symbol in Ireland. But when the Irish economy collapsed, many snakes wound up abandoned due to the high cost of care.

For St. Patrick’s Day 2013, the New York Times reported on the phenomenon and talked to Kevin Cunningham, founder of the National Exotic Animal Sanctuary, which took in many abandoned snakes.

He said that he believes Irish people have an inbred fear of snakes.

He added: “We have it deep inbred in us that they’re evil and nasty and tempted Eve and were led out of Ireland.

“One six-foot snake ended up with us recently after its owner lost his job and had to move in with his parents.

“Being a good Irish mother, she said, ‘Of course I’ll take you back home — but I’m not taking your boa constrictor.'”