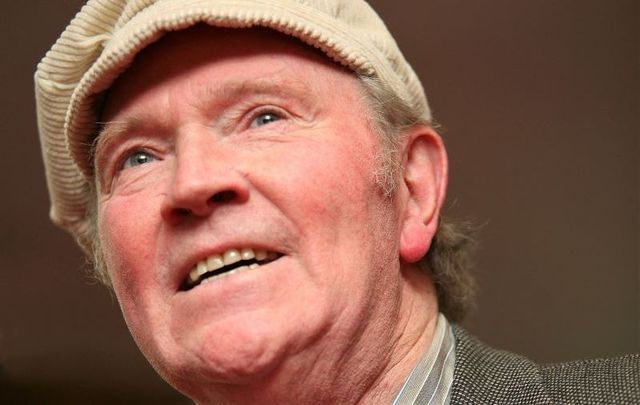 Legendary Irish singer Liam Clancy passed away on December 4, 2009, at the age of 74

When I was growing up in the Irish-heavy north Greenwich Village of the 1960s most of my pals wanted to be Mickey Mantle or Willie Mays. I was different. I wanted to be Liam Clancy.

Because he was a rebel. And a rogue. He taught me about the audacious Brennan on the Moor and the deadly fate of young Roddy McCorley. He sang sad love songs in that beautiful voice that would bring you to tears—then tore into the English with something like “God Bless England” or “Mr. Moses-Ri-Tooral-i-ay.”

I first learned of the pleasures and evils of drink because of “Whiskey, You’re the Devil” and a young girl named “Nancy Whiskey” who’d grab you “by the knees.” And he didn’t let the all-powerful clergy off the hook either, poking gentle, but pointed, fun at the priests and nuns in the audience.

There was another reason he was my hero—I knew Liam always got the girl. And, boy, knowing what I know now, did he ever!

I got to know Liam casually in the 1970s and ‘80s when he drank at the Lion’s Head saloon on Christopher Street in the Village. I would tease him about why he always wore a cap—the worse show business sin, baldness!—and he would go right back at me, commenting about my scrawny red beard.

At the Head, he was a regular and a regular guy and at home, he was, because of his albums, part of the family. He was loved and admired on both sides of the Atlantic and as soon as his death was announced on RTE on December 4, 2009, my phone started ringing with calls from cousins and friends in Dublin. His loss was profoundly felt not as a celebrity, but as a friend.

Liam Clancy was a superb performer and showman

The Clancy Brothers and Tommy Makem famously burst on the scene with an appearance on "The Ed Sullivan Show" in January 1961.

“We weren’t that impressed,” wrote Liam in his autobiography. “We were arrogant. Young and arrogant. As they say in Ireland, we didn’t give a tinker’s damn. But we accepted.”

There was a cancellation of one of the acts and the Clancys and Makem filled, getting 15-minutes of uninterrupted publicity. Fifteen minutes and 80 million viewers later, they were, as Tom Clancy succinctly said, “Fuckin’ famous!” After working at their craft in the back room of the White Horse saloon on Hudson Street in the Village for years, instantly, because of the power of television, they were celebrities.

Greenwich Village contributed a lot to the group. Back then, in the early ‘60s, it was a hotbed of poets and folksingers. Odetta at one joint, Tom Paxton at another, Peter, Paul & Mary around the corner. And a young future Nobel Laureate, Bob Dylan, hobnobbing with them all, especially one Liam Clancy. Liam was Dylan’s hero too.

In his obituary, the New York Times quoted Clancy saying: “People who were trying to escape repressed backgrounds, like mine and Bob Dylan’s, were congregating in Greenwich Village. It was a place you could be yourself, where you could get away from the directives of the people who went before you, people who you loved but who you knew had blinkers on.”

Blinkers off, Clancy, in Dylan’s eyes, attained new artistic heights. “I never heard a singer as good as Liam, ever,” said Dylan. “He was just the best ballad singer I ever heard in my life.”

Liam Clancy was a man of his time through his songs

Liam could sing about anything—the sea, apple orchards, traveling people—but he also had a social conscience. He sang poignantly about homelessness in “Streets of London”.

He sang about our delicate ecological balance on Mother Earth in “The Garden Song”.

He did not avoid the hot issues of the Northern Ireland Troubles either. In the 1970s when RTE banned the voices of protest in the North—one of the dumbest political decisions ever conceived by the Minister for Posts and Telegraphs, the highly-overrated Conor Cruise O’Brien—Liam did not forget the struggle.

It was almost impossible, even in the United States, to get a recording of “The Men Behind the Wire,” but Liam sang it—and was criticized for it—when others would not even touch the incendiary rebel song, the best song to come out of the Troubles.

Liam’s nationalism ran deep. His family owned a pub in Tipperary during the War of Independence and the Black and Tans often paid unwelcomed visits.

He could as easily recite Robert Emmet’s Speech from the Dock as belt out Padraic Pearse’s “Oro Se Do Bheatha” in Irish.

But he was also a showman in the best sense of the word. He could robustly recite the degenerate French poet Charles Baudelaire’s “Get Drunk”, then launch into a rendition of “Ar Fol Lol O,” a song about the innate beauty of mankind.

His signature song, of course, was “The Band Played Waltzing Matilda,” maybe the most beautiful anti-war song ever written. At concerts when he sang this song you could hear a pin drop and when he was finished there was no applause because the audience was stunned. It was not unusual to hear sobbing from man and woman alike.

The almost Clancys & Makem sitcom: “Bigger Than the Beatles”

A couple of years ago, I came across one of the great oddities about the Clancys and Makem. There was an old rerun of Danny Thomas’ show Make Room for Daddy from 1963 on TV called “Oh, the Clancys.” They sang “Brennan on the Moor” and “Portláirge.”

I was so surprised by this show I emailed the late Jerry Campbell who was their manager for most of the 1960s. Back in the ’60s, Danny Thomas not only had his own show, but with Sheldon Leonard also successfully packaged two other hit sitcoms: Andy Griffith and Dick Van Dyke.

“I had a deal with Danny Thomas & Sheldon Leonard,” Campbell emailed me, “what you saw was basically the ‘pilot.’ It went well and I got a firm offer for CB & TM to star in their own weekly show on NBC, produced by Danny Thomas & Sheldon Leonard & I was to be the associate producer. Lot of money involved. Firm 13 weeks on NBC, plus 13-week options on & on and rerun right going on for years."

“Then the ‘fun’ began!! When the ‘folkies’ found out about it, they hit Liam hard—He was ‘selling out,’ etc. Heavy-duty pressure from a number of people. Basically, these people were very jealous that they hadn’t been offered the ‘deal’. They all backed Liam into a corner & I kept explaining to him what was going on, so did the William Morris Agency who represented Thomas & Leonard and so did NBC."

"Then, a number of people got onto Tommy Makem & he caved in saying he didn’t want to play an Irishman’ on TV. I told him point-blank that I would be hard put to seem him playing an Italian on the show. Crazy Shit!! All the ‘Irish’ who got into the ‘discussion’ were basically afraid CB & TM would be very successful and they didn’t want that to happen & CB & TM. I didn’t, couldn’t understand this. When these same people who talked Liam & Tommy out of ‘selling out’ got their own deal with the networks, they jumped right on the ‘bandwagon.’ They turned down the entire deal—left big time $$Millions on the table."

“They did the same thing on a movie deal I had with Peter Bogdanovich for them to star in a Western that he & Larry McMurtry wrote. CB & TM made some big time dumb career decisions, but there was nothing I could do about it. If they had accepted the deals I got for them they would have been bigger then the Beatles.”

“Our Revels Now Are Ended”

One of my proudest possessions is a copy of "The Mountain of the Women" that Liam sent me. I gave Liam a cameo in my Michael Collins fantasy novel, "Terrible Angel," sent him a copy in Ireland, and invited him to my book party at the old Lion’s Head, now the Kettle of Fish.

In response, he sent his autobiography to me with this inscription: “For Dermot McEvoy, January 17th, 2003. One good book deserves another. Thanks for thinking of me. I’d love to have been at the launch in the Head/Kettle of Fish. Let’s have a glass there sometime. Give my best to any of the old gang you may come across and—great good luck with the book.—Liam Clancy.”

We never had our glass, but I got to know Liam better, for in the last decade of his life, he published an autobiography, "The Mountain of the Women: Memoirs of an Irish Troubadour," which told his story, his struggles, and his many loves and many children.

He went even further in the documentary "The Yellow Bittern: The Life and Times of Liam Clancy," which is a brutally honest look at the rise, the tragic fall, and the heroic rise again of Liam Clancy.

He once famously said to Bob Dylan: “No fear, no jealousy, no meanness” which is about the best philosophy a man can have in this tough life.

Liam ended every concert with “The Parting Glass.” It’s as if Liam was trying to give his life philosophy—be true to yourself and do no harm to others.

"Of all the money that ere I had, I spent it in good company.
And of all the harm that ere I’ve done, alas was done to none but me.
And all I’ve done for want of wit, to memory now I cannot recall.
So fill me to the parting glass. Goodnight and joy be with you all.

Of all the comrades that ere I had, they’re sorry for my going away,
And of all the sweethearts that ere I had, they wish me one more day to stay,
But since it falls unto my lot that I should rise while you should not,
I will gently rise and I’ll softly call, “Goodnight and joy be with you all!”

God bless, Liam. We miss you.

What's your favorite Clancy Brothers song? Share in the comments!